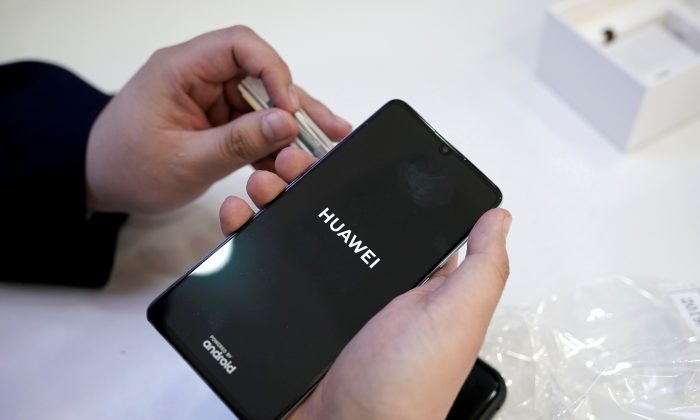 A salesman turns on a new Huawei P30 smartphone for a customer after Huawei's P30 and P30 Pro went on sale at a Huawei store in Beijing on April 11, 2019. (Jason Lee/Reuters)
By Bitter Winter

The new jingwutong (literally, police affairs and communications) smartphone for law enforcement was specifically developed by the First Research Institute of the Ministry of Public Security based on Huawei Mate10/10Pro hardware. It is equipped with a dual system: One is a conventional system used by police officers in everyday life; the other one is made to access the internal public security database. Not only can the two systems run securely and independently, but can be switched from one to the other with a single click. Thanks to the effective facial recognition and other biometric features installed on the phone, officers can photograph people or take their fingerprints and access their information from the database.

A document detailing the issuance and use of Huawei smartphones in a city in Hebei Province indicates that for security and confidentiality purposes, the phones are equipped with matching security authentication cards (securely encrypted TransFlash cards or mobile police digital certificates). All police officers who receive the phones must sign a confidentiality agreement, which prohibits them from lending them others, disassembling them or sending them for repairs, as well as disclosing any information about them to outsiders. Any of the above offenses are punishable as the leaking of secret information.

Starting from the end of 2018, public security institutions in multiple regions of China carried out unified procurement of these smartphones and organized special phone distribution and training sessions for officers. Successive ceremonies to distribute 6,000 Huawei’s smartphones were held throughout Shantou City in southeastern China’s Guangdong Province in December.

“In the past, the government also procured ZTE, Coolpad, and other cellphones, but since 2017, they have basically only procured from Huawei,” said a public security officer from northern China’s Hebei Province. He added that because of the built-in search software on the new Huawei phone, all information on every person—from an infant who was born 28 days ago and just received a birth certificate—is accessible to officers through the public security big data platform, where the authorities have been extensively collecting information over the past few years.

“No matter how much suspicious persons have altered their appearance, as soon as their eyes are exposed, within two minutes after their photo is taken, the officer can view the person’s home address, name, age, height, occupation, family members, their crime record, and even at which hotels they have previously stayed. As soon as their identity is determined, the officer can arrest the individual immediately,” the officer expanded on the smartphone features.

The police station where this officer works is demanding its personnel to use the smartphone to ascertain the information on anyone suspicious. Among them are Uyghurs that are often regarded as terrorists and placed under supervision, some religious groups designated as xie jiao and included among the primary targets of “cleaning up gang crime and eliminating evil campaign,” or rights activists accused as being “dark and evil forces.”

One house church Christian told Bitter Winter that when he was arrested at a meeting venue last year, it was precisely this kind of device that the police used to access his information from the public security system by entering his full name.

The Huawei phone can also be used to access information on cars and electric vehicles. A police officer in Hangzhou City in the eastern province of Zhejiang told Bitter Winter that when getting a license plate for an electric vehicle, owners must provide their ID cards and are photographed together with the vehicle, with a backup copy of the photo stored in a database. As soon as a license plate is scanned using the police smartphone, all information belonging to the registered person will be displayed on the device.

Similar to the mobile app “Xi Study Strong Nation,” some local authorities have even designed a feature for accumulating points on the Huawei smartphones encouraging police officers to acquaint themselves with this high-tech equipment better as soon as possible. The more times they use it, the more points they will accumulate. For instance, if a police officer uses it to check a person’s ID information or a vehicle, he/she will receive two points. The same amount of points is rewarded to each comment on a special police discussion platform accessed through the phone. Officers with the highest score are commended and rewarded. In contrast, in cases where information was leaked using a mobile police terminal, those responsible will face punishment.