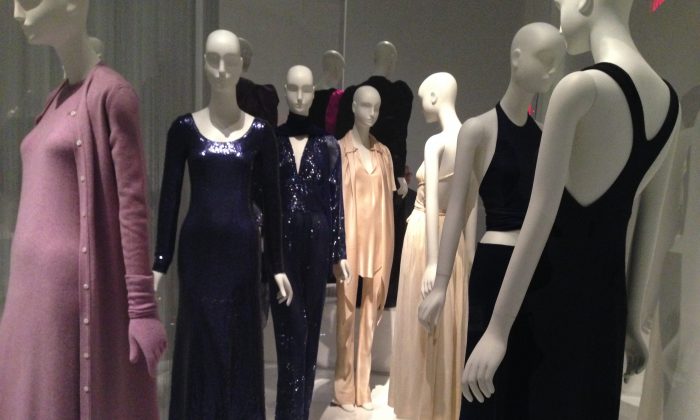 How Yves Saint Laurent and Halston Defined the ’70s

With the dust still settling after the New York Fashion Week stampede of fashionistas, bloggers, and editors, we can take deep breaths again and contemplate the creations of designers past whose legacy continues to play a strong part in today’s fashions.

Currently on show at The Museum at the Fashion Institute of Technology (FIT) is “Yves Saint Laurent + Halston: Fashioning the ’70s,” an exhibition that celebrates the two designers who defined the fashions of the 1970s but whose styles and innovations are still inextricably part of current womenswear. The fashion elements they created are so much part of our day-to-day wear that we cannot ever imagine a time when they weren’t.

Take the two-piece pant suit, or the importance of separates and having a wardrobe of basics to combine as we wish—these were concepts and habits that developed in the early 1970s when these two designers were tuned into women’s changing attitudes and habits.

This is the first time that Yves Saint Laurent’s (YSL) and Roy Halston’s work have been analyzed side by side, revealing some surprising facts.

“It was very shocking for us when we went in to start looking for pieces to fit into these different themes that we wanted to highlight. We were really struck by the juxtapositions that we started to see between some of the pieces,” said assistant curator of The Museum at FIT Emma McClendon, referring to herself and deputy director of The Museum at FIT Patricia Mears who organized the current exhibition.

The Zeitgeist of the ’70s

As we walked through the exhibition McClendon put into perspective just how it came to be that the two designers were so successful in the early 1970s, explaining that the decade was an incredibly difficult time in fashion because dress codes broke down, counterculture really reached mainstream, and couture had fallen from its dominant position.

“I think that both of them tapped into the zeitgeist, looking at all the influences, and ended up pulling out of that very similar styles—as happens today with designers too,” said McClendon.

Both designers are equally represented by the approximately 80 ensembles and 20 accessories that are arranged thematically.

The exhibition gives due importance to Saint Laurent’s Rive Gauche range which is often downplayed in other YSL retrospectives. Rive Gauche was an important line for the designer because he used it as a platform to experiment with non-Western and vintage influences that were considered “non-couture,” feeling the pulse of the buyers, so to speak, before dedicating to them a whole couture collection. No doubt it was also a way of conditioning his clients to accept whatever boundaries Saint Laurent chose to push in search of a signature style.

The effectiveness of this modus operandi for Saint Laurent turned out to be a game changer for the fashion industry. According to McClendon, even though Saint Laurent is still thought of as a grand couturier, he was in fact very heavily invested into designing for women of all types, ages, and classes. He made a very conscious effort to create a synthesis between his couture and his ready-to-ear lines.

This is very evident in the exhibition.

But more about that zeitgeist.

It all began during the ’70s when women started to buy 1930s and 1940s clothes from thrift stores and started to wear them both during the day and out in the evening, recounts McClendon. Saint Laurent tapped into this trend for vintage dressing quite literally, as was evident in 1971 when he presented his 1940s couture collection which was panned in the press.

“Critics considered it very ‘un-couture’ and deemed it shocking for him to revive the styles from the war period, to the extent that people thought he was a Nazi sympathizer, or that the women looked like tramps wearing these clothes,” said McClendon.

Admittedly, the fact that he sent models down the runway without any underwear in sheer black lace would not have helped to impress the critics who were already having a hard time grasping the concept that vintage is good.

But the young women, for whom vintage clothes did not have the same negative connotations, judged the clothes according to their practical and aesthetic merits alone. So when Saint Laurent translated these trends into his Rive Gauche line, such as the chubby and the fun printed shirt dresses that are on show, the young women whom the line was targeted at “really went crazy for these vintage styles.” They started to consume them a such a high rate that the line was an unprecedented hit.

It all began during the ’70s when women started to buy 1930s and 1940s clothes from thrift stores and started to wear them both during the day and out in the evening.

Prompted by the later success of these Rive Gauche versions, supposedly, the famous fashion writer Eugenia Sheppard traveled to Paris to apologize in person to Saint Laurent for panning his couture collection so badly when it first emerged.

Halston also referenced vintage style but he was fixated on translating the 1930s style into modern, wearable clothes. His evening wear clearly demonstrates Halston’s interest in showing off the unfettered structure of the human body with all it’s curves.

McClendon explains how the silk jersey dresses by both Halston and YSL highlight the different approaches to design. Halston lets the wearer tie and wrap the fabric around the body, while YSL gives the wearer an equally slinky style but with a predetermined and structured fit designed to look like it has been draped by the wearer.

The vast majority of the pieces are very easily translatable into today’s styles, made even more poignant by the fact that we are in the midst of a literal ’70s revival, judging by the recent Fall/Winter 2015/2016 collections.

On show is a great cross sections of Halston’s best pieces. The racer back that is so ubiquitous in modern sportswear can be seen in one of Halston’s evening gowns—a design element from 1930s bathing suits. Halston was also influenced by Claire McCardell—the designer credited with having created the “American look”—evident in his the self-tie dresses and tops.

Both designers took from the past what they needed to express the shift toward more streamlined garments that were also practical. “They created garments which you could fold up and put into a suitcase; because their clientele were the jet-set, but they have this modernity and functionality to them as well as this intense and decorative fashionable quality,” said McClendon.

The relaxed menswear-inspired separates is where there is most cross-over between YSL and Haston, according to McClendon.

“As you get into evening wear, particularly midway through the decade, that’s when you see the divergence because for YSL evening was a time for fantasy and drama. For Halston, by the second half of the 70s, evening was the time for sleek, minimal, and modern,” said McClendon.

A lot of the garments on show are exhibited in such a way as to draw attention to how the two designers treated certain themes. Surprisingly, many garments are so similar in style that one has to carefully read the text boxes as to know who designed what. And although Halston is known as being very monochromatic, preferring to highlight the structure of the garment and the body, this in no way means that he shied away from color. Likewise Saint Laurent known as a great colorist knew how to adapt his color palette to a more demure day-wear style.

They created garments which you could fold up and put into a suitcase; because their clientele were the jet-set, but they have this modernity and functionality to them as well as this intense and decorative fashionable quality.
— Curator Emma McClendon

The highs and lows of the two designers’ careers is also depicted in the exhibition through a visual timeline. Of particular note is how their paths dramatically diverged at the end of their careers. As Saint Laurent became part of the establishment, Halston fell from favor. He was the first designer of his caliber to sign a licensing deal with retail chain J.C. Penney,– which subsequently lead to high-end stores like Bergdorf Goodman dropping his Halston Limited line as they felt that the Halston brand had been irretrievably damaged.

Of course with the benefit of hindsight, even in this, Halston was ahead of his time. The list of American designers names who have collaborated with retail chain stores like H&M and Target is a very long one. And nowadays words like “epic” are used to describe this type of collaboration as in the case of Alexander Wang’s range for H&M.

Perhaps someone owes Halston an apology as well. Although, even if Halston were alive, sadly the gesture seems incongruous with the zeitgeist of the times we live in.

The exhibition will be on view through April 18. More information at www.fitnyc.edu/museum.asp