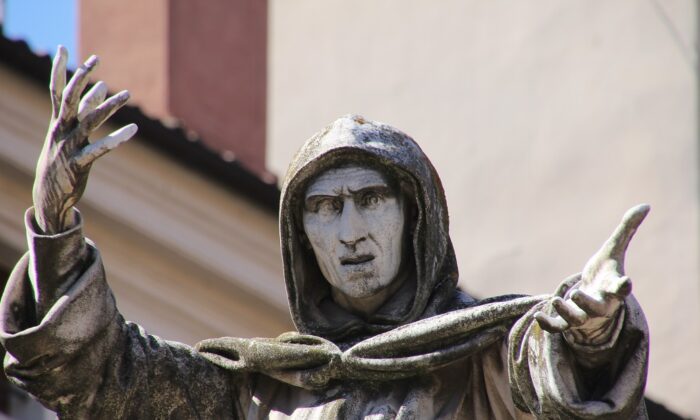 How ‘Woke’ May Be Leading Us to Civil War

The other day, I wrote that “woke” was the new conformism.

It is, of course, but I undersold it. It’s much more than that and more dangerous.

As Tal Bachman notes at Steynonline, it’s now our state religion, a state religion in a country that—constitutionally and for good reason—isn’t supposed to have one.

But “Wokism” is yet more than that, too. It’s a mass psychosis similar to many that have arisen throughout history when the masses followed leaders who, in their zeal or self-interest, took them to disastrous ends.

A good example was when the Dominican friar Girolamo Savonarola—in a 1497 version of “cancel culture”—swept up everything secular in Florence from some of the most extraordinary paintings and sculpture of all time to the works of Boccaccio and burned them in the so-called Bonfire of the Vanities.

Being Jewish, I am also reminded of the bizarre tale of Sabbatai Zevi, the 17th-century Sephardic rabbi who proclaimed himself the long-awaited true messiah of the Jews, garnered thousands of followers, and then ended up leaving them completely in the lurch when he converted to Islam. (Interestingly, Bachman writes that “wokism” resembles Islam structurally.)

Closer to our time, the great Italian director Federico Fellini, in his film “La Dolce Vita” (1960), shows us what seems like hundreds of people rushing about, tears streaming, trampling each other, believing reports that the Madonna has been sighted. As the scene progresses, the crowd grows, with more and more people convinced of the sighting.

Of course, what Fellini documents is more or less harmless—not so “woke.” This psychosis has a political dimension and the capability of changing a society, which it has already done.

“Woke” gains adherents much in the manner of “est”—the  Erhard Seminars Training—that I attended in the 1970s at the behest of a movie producer interested in making a film about it. (It never happened.)

For est, several hundred people sat in a large conference room listening to the “training” for hours under instructions not to get up, even to go to the bathroom, until they raised their hands signaling they “got it” (i.e., effectively joined). Nature’s calling being what it is, most eventually did.

Although operationally similar, “woke” is exponentially more perilous than the now-defunct est training. Our position in society, our livelihoods, and our children’s educations and futures are being held over our heads, not our mere use of a restroom.

An iron-fisted, ideologically extreme minority has our country under its thumb—play along or face ex-communication. This is stronger than anything in our history and almost identical to what we see and have seen in totalitarian countries.

It’s a psychosis approaching mass hallucination. In Franco’s Spain, they shouted, “Viva la muerte!” (“Long live death!”) Here we are asked to proclaim just as loudly “Black Lives Matter,” to display signs saying as much on our lawns, although we never thought otherwise and always thought (naively, we are told) that all lives mattered.

All key aspects, most parts of them anyway, of our society “get it” as they did in est (i.e., now believe in ”woke”) or, yet more ominously, cynically say they do—the media, the corporations (“Better woke than broke!”), the government bureaucracy, the Democratic Party, the Department of Justice, the FBI, the military (yikes!), entertainment, the university system, the K–12 system, the medical community, the scientific community (incredibly), the religious community (sadly), and on and on.

All, to one extent or another, believe in “woke” except—the people.

Most of the people anyway.

Most of what used to be called the common men (or women) in the street roll their eyes at “woke”—including even some silent, but browbeaten, Democrats—and do their best to move on, although many realize that “woke” and its sister “social justice” are in essence euphemisms for an ideology far more totalitarian than any ever in control of this country, communism.

How long can this gaping dichotomy continue?

How long before they stop rolling their eyes?

A rebellion against “woke” is brewing, particularly in red states, some of which are banning or have already banned critical race theory in their schools, among other pushbacks. (Kudos to Rep. Mark Green, Republican of Tennessee and Iraq War veteran, for introducing legislation to block critical race theory training at U.S. military academies.)

But will that be enough against a federal government that lives and breathes this evil ideology and that is essentially governed by a homegrown politburo—the thought that Biden acts by himself is ludicrous—determined to impose it?

As this imposition increases, the “contradictions,” as the Marxists would say, are heightened.

What the extremist ideology of “woke” actually provokes is talk of—and not just talk—secession and even civil war.

Few of us have heard anything like that in our lifetimes. But now it’s real. We have been driven apart as never before. We have been awakened indeed.

Anything can happen and some of us, who would never have considered anything like secession and civil war, suddenly do—highly disturbing to us as those thoughts may be.

So why do we even tolerate “woke”?

Bachman gives us a quotation from Austrian philosopher Karl Popper that is remarkably apposite for our times:

From Antifa to BLM (whose leader apparently identifies with the mass murderer Chairman Mao) to the willfully blind talking heads of left-wing cable TV, no one is as intolerant as the ”woke” folks. They break all domestic records in that regard.

Time to stop tolerating them.