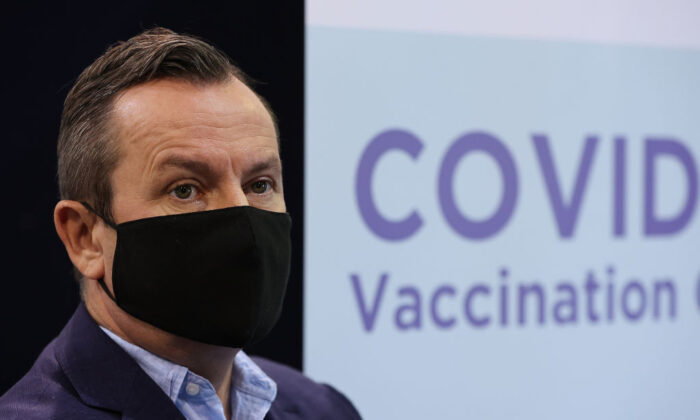 How the West Was Lost

The Premier of Western Australia (WA), Mark McGowan, has reneged on his promise to re-open the state borders to the rest of Australia (and the world) on Feb. 5. To justify the continuation of his policy of closed borders, McGowan has expressed concern over the Omicron COVID-19 variant.

“Unfortunately, the world changed in December; Omicron arrived. Omicron is a whole new ball game. We can’t just shut our eyes and hope that it is different,” he said.

However, the WA border closure and restrictions diverge from relevant developments elsewhere in Australia and the world.

Indeed, an increasing number of European countries are rescinding COVID-19 restrictions, including vaccine passports and mask mandates. In the United Kingdom, from Jan. 27, people will no longer have to wear a mask in public or provide proof of vaccination.

A Pfizer Board Member, Dr. Scott Gottlieb, has also advocated a return to normality because infection rates are declining throughout the world.

McGowan’s uncompromising and inflexible attitude to border closures and COVID-19 restrictions reminds us of that great American epic western film, “How the West was Won.”

It is a story of American determination, perseverance, and sacrifice, which facilitated the conquering of the Western part of the United States. But what is happening in our own West, in Western Australia, is the opposite: it is a story of desperation, discrimination, oppression, and economic vandalism.

A comprehensive study (pdf) released by the Centers for Disease Control and Prevention (CDC) on Jan. 11 provides “compelling evidence of an intrinsically less severe infection” from the Omicron variant. Indeed, Omicron poses a “substantially reduced risk” of serious illness compared to Delta—and is 91 percent less likely to kill those infected, according to this U.S. funded study.

Dr. Omar Khorshid, who is president of the Australian Medical Association (AMA), said he is “gutted” by the decision to keep the state borders closed.

“Don’t pretend that the more ‘compassionate’ border arrangements are a major move, they’re long overdue, but the hard border continues to harm many people and needs to come down as soon as we are ready,” Khorshid said.

McGowan’s announcement to keep the state borders indefinitely closed is also a terrible blow for families who would finally be able to reunite.

Andrew McKellar, CEO of the Australian Chamber of Commerce and Industry, comments that Western Australia cannot live in a never-ending state of isolation.

“This will not only hit business, trade and investment, but on a human level, it will mean more suffering and anguish for families who have not seen each other in nearly two years,” he said.

International education, tourism, events, and other sectors will be particularly affected. According to him, such a decision will inevitably “result in tourism operators in WA losing their homes and businesses.”

Warren Pearce is chief executive of the Association of Mining and Exploration Companies. He argues that the decision to keep the borders closed, “will further delay the ability of the mining industry to attract much-needed workers to reinforce existing operations, support expansions, and for the construction of new projects.”

Governmental measures, including advice to “work from home” and to wear face masks, have also had the effect of decimating the WA business sector.

Walking on the streets of Perth CBD in Western Australia can be a depressing experience. Social distancing, the long queues to enter stores, and the discriminatory requests to show “vaccine passports” deprives people of a pleasant shopping experience.

As a result, the city of Perth is gradually becoming a ghost town. Clothing retailers have seen the biggest decline, with many shops closed due to dwindling clientele affected by the restrictions. Most shops on James Street in Northbridge are closed forever, and beggars and homeless people now populate the entire area.

The WA government had already introduced the most draconian mandatory vaccinations policy in Australia, including booster shots, for at least 75 percent of the local workforce.

But now, anyone aged 16 and over who refuses to be constantly jabbed by the government will from Jan. 31 be banned from all hospitality and entertainment venues, gyms, hospitals, and even bottle shops—including access to the drive-through. Of course, this will disastrously impact local commerce.

McGowan warned on Jan. 13 that “Life will be very difficult for the unvaccinated.”

“No pub, no bottle shop, no gym, no yoga class, no gigs, no dance floors, no hospital visits,” he said.

Announcing the further expansion of an all-encompassing vaccine passport system, he informed that such measures will remain in place for many “years.” McGowan candidly stated that, in adopting segregationist policies, vaccinated people will be confident they are “only mixing with other vaccinated people.”

Of course, the risk of infection would be minimal if the vaccines worked properly, and people would be able to avoid booster shots. However, the premier has dehumanised the unvaccinated by referring to them as “dropkicks”—Australian slang for a stupid or worthless person—for refusing to show proof of vaccination in hospitals, restaurants, pubs, hotels, gyms, etc.

“If you’re asked to show your proof of vaccination, don’t be a dropkick,” McGowan said on Jan. 6. This is not the first time the WA premier has attacked residents.

On Sept. 18, 2021, he told those who oppose mandatory vaccination to “grow a brain.” The dehumanisation of those who refuse to be jabbed turns these individuals into scapegoats for the severe economic problems society currently faces.

Indeed, the premier’s authoritarian behaviour makes him dangerous for the socio-economic future of WA. His decision to keep the WA border closed is causing unnecessary pain and economic suffering to innumerable people and destroying their lives and livelihoods.

It is appropriate to end with a quote from David Hockney, a prominent British artist and painter, who wrote to his friends in Normandy during the dark days of COVID-19, “You can’t cancel spring.” It is a message that the oppressive regime of Western Australia should be reminded of regularly. One day, the West will be regained.