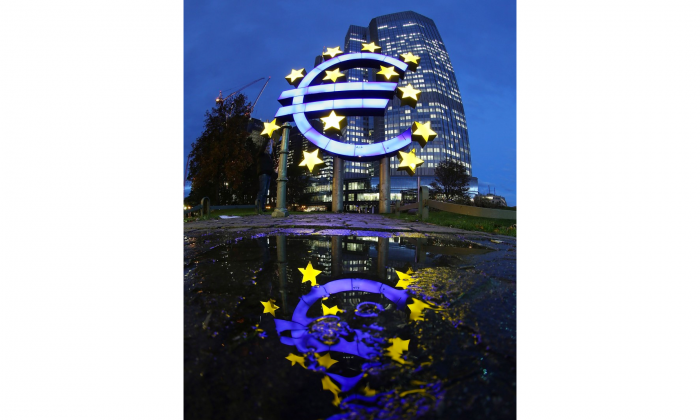 The giant Euro symbol reflected outside the headquarters of the European Central Bank (ECB) in Frankfurt, Germany. Opposition to the Canada-EU Comprehensive Economic and Trade Agreement (CETA) is brewing in Europe and could sink the deal, suggests Scott Sinclair, the director of Canadian Centre for Policy Alternative's Trade and Investment Research Project. (Hannelore Foerster/Getty Images)
Canadian Content

How German Opposition Could Sink a Major Canadian Trade Pact

Could the CETA Founder in Europe?

After many delays, the Canada-EU Comprehensive Economic and Trade Agreement (CETA) text could be finalized by negotiators within weeks. But in Europe, a messy fight over its ratification is just beginning. Germany, in particular, is in the midst of a lively public debate over another economic treaty, the EU-U.S. Transatlantic Trade and Investment Partnership (TTIP). The formerly low-profile CETA is now being drawn into the controversy swirling around the TTIP.

One of the most controversial elements in the TTIP, and the CETA, is its investor-state dispute settlement (ISDS) mechanism, which allows foreign investors to bypass the domestic courts to directly challenge government measures before unaccountable arbitration tribunals.

The German government has long been a solid supporter of investment protection treaties with developing countries. But recently Germany itself has been sued by foreign investors using ISDS. The most controversial dispute is a 2012 claim by the Swedish energy company Vatenfall which seeks compensation for Germany’s phase-out of nuclear power. In the wake of the Vatenfall investor-state challenge, public and official opinion has swung firmly against the inclusion of ISDS in trade agreements, especially those treaties that involve other developed countries such as the United States and Canada.

In just a few months, German activists collected 500,000 signatures on petitions opposing the TTIP and the CETA. The TTIP was a prominent issue in the recent European Parliament elections, with candidates from across the political spectrum pledging to oppose the inclusion of ISDS in new treaties and any erosion of European regulatory standards.

Why the Long Delay?

Suddenly, the CETA is no longer flying under the public radar. The deal includes most of the elements of the contentious TTIP, including ISDS, and regulatory harmonization initiatives. The Canadian government’s aggressive lobbying against the European Fuel Quality directive, which aimed to reduce the use of carbon-intensive transport fuels from oilsands, has aroused public suspicion that the CETA’s “regulatory co-operation” provisions will be used to attack higher European consumer protection and environmental standards. In Germany, the CETA is now regarded as a prototype—or Trojan horse—for the TTIP. NGOs are campaigning actively against both agreements.

In January 2014, the European Commission announced a pause in the TTIP negotiations on ISDS in order to consult the public. If the commission hoped to quell growing public concern about ISDS, its strategy has not worked. The European Parliament, which must approve all trade and investment treaties, has a new slate of recently-elected politicians that are more critical of ISDS. There are also sharp differences between the commission, which negotiates on behalf of Europe, and key member states, including Germany and France, that firmly oppose including ISDS in the TTIP and, more quietly, in the CETA.

In fact, one of the reasons for the long delay in wrapping up the CETA negotiations is these member states believe it would show extremely bad faith for the commission to celebrate a deal that includes an ISDS mechanism in the middle of the European-wide public consultation on the merits of investor-state arbitration in the TTIP.

It is widely understood that approving an ISDS mechanism in the CETA would set the stage for its inclusion in the TTIP. Indeed, because of the high level of economic integration between the United States and Canada, U.S. investors could initiate investor-state claims through their Canadian subsidiaries against the European Union and its member states under the CETA, even if ISDS is left out of the TTIP. Already, Canadian firms such as AbitibiBowater (now Resolute Forest Products) and Lone Pine Resources have posed as American to profit from NAFTA’s investment chapter by suing Canada, in the latter case against a precautionary moratorium on fracking in Quebec.

Both Canada and Europe have highly regarded court systems that protect the rights of all investors, regardless of their nationality. There is no convincing justification for including investor-state arbitration in the CETA negotiations. Europeans who are rightly concerned about the TTIP are increasingly aware that the CETA poses similar threats. Influential European consumer, environmental protection, and labour organizations now urge “EU member states and the European Parliament to reject any final TTIP or CETA deal including ISDS provisions.”

The current Canadian government’s dogged support of ISDS, despite Canada’s negative experience under NAFTA’s Chapter 11, has landed the CETA in the middle of a hot public debate in Europe. It is too early to predict the final outcome, but the fate of the CETA in Europe is now inextricably tied to that of the highly controversial TTIP. If the U.S. agreement sinks, it could drag the CETA and its ISDS provisions down along with it.

Scott Sinclair is the director of Canadian Centre for Policy Alternative’s Trade and Investment Research Project.