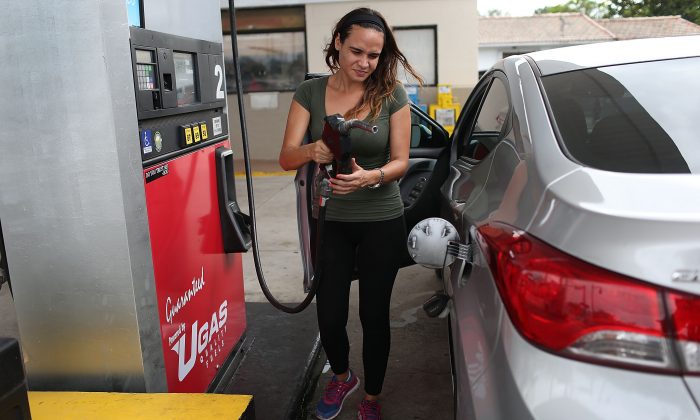 Every American household will save around $700 in 2015 with the decline in gas prices, according to U.S. government estimates. So are households spending this savings? And if so, what are they spending it on?

A report by JPMorgan has shed light on the effects of gas price decreases on consumer spending. The report said that individuals spent roughly 80 percent of the extra money. And over half of that spending was for restaurants, groceries, retail, and entertainment.

“At a time of slow wage growth, this boost in discretionary income is significant,” said JPMorgan.

For every dollar less spent at the gas pump, individuals spent roughly 80 cents (72–89 cents) on other things. People spent 18 percent of their gas savings on restaurants alone.

The largest portion of savings was spent on nondurable goods, totaling 33 percent, which includes grocery, retail, department stores, and discount stores, including online and catalogs.

The second largest category of spending was on services—things like restaurants, entertainment, personal and professional services—with a total of 32 percent.

In addition, the research revealed that the Midwest and South saw the biggest declines in consumer gas spending, given that those areas saw the greatest decline in prices plus individuals in these regions consume the most gas.

JPMorgan conducted the research by using samples of 25 million regular debit and credit card holders and 1 million core Chase customers. The bank examined the spending behavior of these people as oil prices dropped.

“This boost to consumers spending could be here to stay and even strengthen with time if gas prices remain low or continue to decrease as predicted. On the other hand, a substantial increase in gas prices might proportionately dampen consumer spend,” said JPMorgan.

The average U.S. household expenditure on motor gasoline in 2015 is expected to be around $1,800, the lowest level in more than a decade, according to the U.S. Energy Information Administration (EIA).