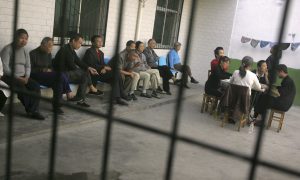 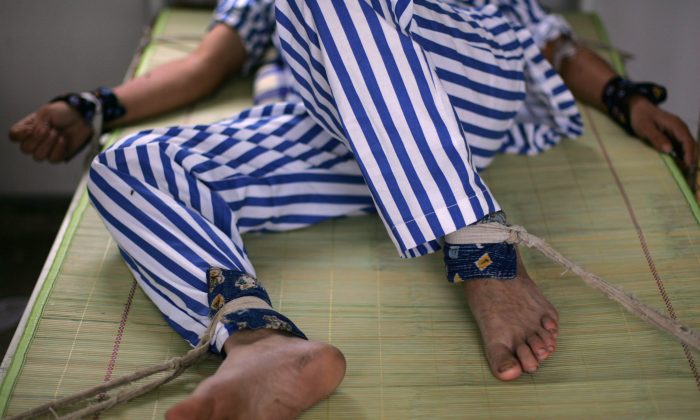 A mental patient lies in bed with arms and legs being bound at the Anxian Mental Hospital in Anxian County of Sichuan Province, China on Aug. 24, 2008. (China Photos/Getty Images)
China

Just when the Chinese regime patted itself on the back for making great progress in human rights last year in a white paper, reports detailing the regime’s continued incarceration of political prisoners in mental health facilities have surfaced.

Qiao, 70, was labelled a “counterrevolutionary” during the tumultuous Cultural Revolution period (1967 to 1977), and later joined the Democracy Wall movement and started the Shanghai Democracy Forum in 1978. He was eventually arrested, sentenced to prison for three years, and after being released, was subject to police surveillance.

Open Magazine, based in Hong Kong, said that Qiao came to Hong Kong in 2001 to discuss the publication of a book, and when he went back to China he was not heard from again, according to Radio France Internationale.

Victims are often seized by security personnel and forcibly confined to these “ankang” without their or their family members’ consent.

Jin Zhong, editor-in-chief of Open Magazine, told RFA that Ma’s statement tallies with the information his publication has gathered so far on the fate of Qiao.

Ma, who was assigned to Qiao at his last psychiatric hospital, realized his patient wasn’t mentally ill, and raised the issue with hospital management, said Jin.

“They were imposing treatment on him forcibly, for mental illness,” Jin told RFA. “The medicine affected his brain, and also had a bad effect on his coronary arteries.”

But the hospital management told Ma they couldn’t do anything about Qiao—he was brought in by the police, who told the hospital not to get “involved.”

Then, Ma “realized Qiao Zhongling was the victim of persecution,” Jin said.

Some of China’s psychiatric hospitals, administered by the Ministry of Public Security, are called “ankang” in Chinese, which translates to “health and peace.” But these secretive medical facilities have a reputation of bringing anything but health and peace to the dissidents and prisoners of conscience—pro-democracy activists, government petitioners, Falun Gong adherents—who find themselves locked inside. They operate outside of the Mental Health Law which applies to the mental health facilities for ordinary citizens.

Victims are often seized by security personnel and forcibly confined to these “ankang” without their or their family members’ consent—an illegal act according to China’s new mental health law, which was instituted in 2013.

Once confined in the psychiatric hospitals, the rights activists, dissidents, and prisoners of conscience are force-fed psychiatric drugs, which damage their nervous systems and they give rise to symptoms like heart failure, memory loss, and, in the worse cases, paralysis, or actual mental illnesses.

The medication given to Qiao has already “affected his brain function, and it’s doing more damage than a beating would,” Jin Zhong said to RFA. If Qiao’s psychosis “treatment” continues, Ma Jinchun worries “he’ll be finished.”

Ma has the right to fear the worst.

Many practitioners of Falun Gong—a traditional Chinese spiritual discipline whose adherents do slow-moving exercises and follow a moral code—who were confined to psychiatric facilities after the Chinese regime started a sweeping persecution of the faith in 1999 suffered severe memory loss and were left paralyzed. In one case, the Falun Gong practitioner Liang Zhiqin suffered heart failure, went into shock twice after receiving injections of psychiatric drugs, and passed away in 2009.

“The tremendous achievements China has made in its human rights endeavors fully demonstrate that it is taking the correct path,” reads the Chinese regime’s white paper on its human rights record last year. The regime is committed to upholding the “fundamental rights” and “universal values” of its people, among other things, the report claims.

Reports on forced psychiatric detention by human rights groups this year paint the exact opposite.

The white paper was released on June 8, the same day RFA ran the story on Qiao Zhongling’s detention in an “ankang.”

A month ago, Washington-based nonprofit Chinese Human Rights Defenders (CHRD) revealed seven known cases of forced psychiatric detention in the past six months, including one where the son of a government petitioner was, as an act of retribution against the petitioner, allegedly committed to a psychiatric institution.

The Chinese authorities “have found forced psychiatric confinement a convenient alternative for restricting the freedom of ‘troublesome’ citizens,” said CHRD.

In January, the Hubei-based human rights group Civil Rights and Livelihood Watch said in a report that the Chinese regime is increasingly sending targeted groups to mental facilities without trial. Group founder Liu Feiyue told RFA that making people “mentally ill” “should never be used as a tool to maintain stability” in China.

An earlier version of the article indicated that China’s psychiatric hospitals partake in illegal torture and detention of political activists and prisoners of conscience. That is incorrect, only those ran by the Ministry of Public Security are known for that. A correction was made to the article on June 12 to reflect that.