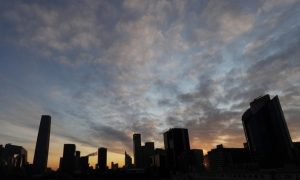 For decades China’s lawmakers have been dragging their feet on reforming income tax laws, which have all along discriminated against low-income groups, particularly those with non-fixed incomes, such as students and writers. A reform that would stop unfairly levying these higher taxes is anticipated this year—but it has been talked about for more than a decade, and each year media reports similar news. There still hasn’t been substantial progress.

China’s Individual Income Tax Law, enacted in 1980, set the tax-free income allowance for a dozen income items—including remuneration for labor and royalties from book publishing—at $130. And while the tax-free income allowance was repeatedly raised for fixed wage earners over the last 35 years, certain low-income groups, such as migrant workers, writers, students, and other part-time, non-fixed income earners, are still subject to the lower $130 tax-free level. The value of $130 has dropped dramatically due to inflation in the intervening three decades, yet the threshold remains where it’s always been.

Lawmakers thus created an unequal and unfair taxation system where these disenfranchised groups are taxed on a much bigger chunk of their earnings.

Take royalty taxation, for example. According to data published by National Bureau of Statistics of China, in 2014 the national average annual wage was $8,046, or $670 per month. For most ordinary employees, after deducting the allowance for the “Five Insurances and One Housing Fund” social benefits, this salary falls within the range of the standard tax-free income level of $563 per month, so this person does not pay any income tax.

Very few writers in China, however, earn royalties that are higher than the national average wage of $8,046. But suppose a writer publishes a book and is paid $8,046 in royalties, he would have to pay income tax of $901, because the taxable level for royalty income is anything earned above $130.

This discriminatory taxation system, where certain non-fixed income groups are taxed on a much bigger portion of their earnings, should end.

It means that a regular employee with a fixed salary of $8,046 annual income does not need to pay any income tax, but a writer who earns $8,046 from writing a book has to pay $901 in taxes. This is unfair on its face.

Consequently, 90 percent of China’s publication industry consists of copying and plagiarism. Small royalty payments and high taxation are some of the reasons for this phenomenon. Very few writers out of the 1.3 billion Chinese people can make a living at writing. Mao Dun Literature Prize winner Liu Xinglong once said, “When I finally finished a medium-length novel, the royalties from it did not even cover the cost of a dinner to treat my friends.”

Students pay 20 percent taxes on anything they earn above $130 from a summer job. For example, a poor college student who earns $483 a month has to pay $77.30 in taxes, while a regular employee who earns $1,796 a month also pays $77.30 tax. Not to mention that students don’t get to enjoy the social benefits of the Five Insurances and One Housing Fund.

A migrant worker who earns $3,864 in six months pays $618 in taxes. He, too, does not enjoy the Five Insurances and One Housing Fund or any other social benefits.

By comparison, a regular employee who also has a monthly salary of $644 does not pay any taxes, since his income is under the $563 minimum taxable income level after deducting the Five Insurances and One Housing Fund.

China’s individual income tax does not consider household income, only individual income. The result can be to tax more heavily several individuals working at low wages than one individual working at relatively higher wages. For instance, a household of three with one worker earning $966 a month pays $6 tax. Another household of three, with three workers each earning $966 a month, pays a total of $17 in taxes. Such taxes, in which low wage earners are being taxed at almost 3 times the rate of higher wage earners are regressive, and widen income inequality. In other words, there’s no tax break for the low-income earner who has to support those in the household who don’t work.

This discriminatory taxation system, where certain non-fixed income groups are taxed on a much bigger portion of their earnings, should end. Creating a standard tax-free income allowance is very simple; it can be achieved by just issuing a document.

In addition, taxes should be based on annual household income. Some people always argue that it is “premature” to implement this in China. But in fact, India, with a similar level of economic development as China’s, levies taxes based on a family’s annual income since 1961. In the age of information technology, there can be no such excuse as “premature.” This type of taxation system was even around a couple of hundred years ago in some countries.

This is an abridged translation of Liu Zhirong‘s article published on his personal blog. Liu Zhirong is a well-known Chinese author and blogger, and regularly tackles sensitive political and economic issues. He is read widely by policymakers, journalists, and academics inside China.