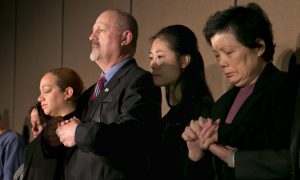 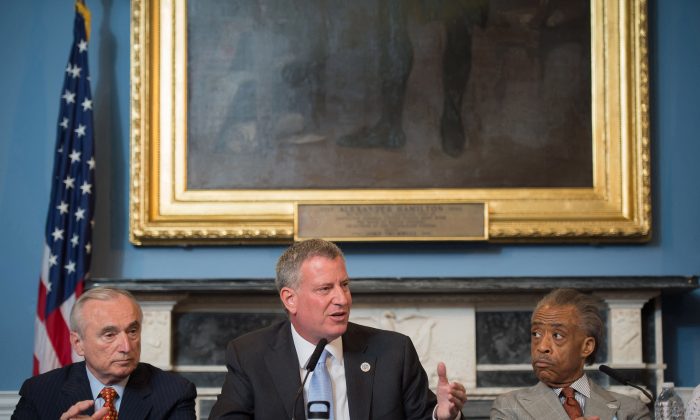 New York Mayor Bill de Blasio (C) is seated between New York City Police Commissioner William Bratton (L) and the Rev. Al Sharpton during a round table discussion convened to ease tensions over the death of Eric Garner, a black man who died from a police choke hold while being arrested. De Blasio has been unable to heal the deepening rift with the NYPD and erase the perception that he is not supporting the police. (AP Photo/New York City Mayoral Photography Office, Bob Bennett)
New York

NEW YORK—What can Mayor Bill de Blasio do to heal his deepening rift with the New York Police Department?

His playbook for erasing the perception that he is not supporting the police—a problem that has escalated in the wake of the killings of two officers—has included face-to-face-meetings with police union officials, warm rhetoric about the work cops do, and stepped-up efforts to negotiate new police labor contracts. Nothing has worked.

The unions have demanded that de Blasio apologize.

As de Blasio plots his next move to end a crisis that has led to a two-week work slowdown by the NYPD, his advisers have made it clear what he won’t do: apologize. And they are cool to the possibility of an intervention from a powerful political figure such as former President Bill Clinton or Gov. Andrew Cuomo.

Interviews with administration officials, police leaders, and experts have yielded possible solutions for de Blasio to broker peace as he tries to propel his ambitious agenda for his second year in office.

De Blasio, swept into office on a promise to clean up police tactics such as stop and frisk, denies criticism that he is anti-police, and says he has gone out of his way to show respect for the job officers do.

But police unions see it differently, and their list of grievances began to grow after last summer’s police chokehold death of unarmed black suspect Eric Garner.

First, de Blasio organized a forum on police-community relations that placed the Rev. Al Sharpton, a frequent police critic, on the stage with equal billing to Police Commissioner William Bratton. A tabloid headline the next day blared, “Who’s the Boss?”

On the night a Staten Island grand jury declined to indict a white police officer in Garner’s death, de Blasio spoke of warning his own son, who is half-black, to be cautious in his dealings with police.

And then de Blasio and top NYPD officials gave wide latitude for the resulting protests in the weeks that followed, allowing demonstrators to snarl traffic.
Those moves infuriated the police unions, which felt that de Blasio had fueled an anti-police sentiment.

On the day the two officers were killed, Patrolman Benevolent Association President Patrick Lynch said the mayor had “blood on his hands” and dozens of officers turned their backs on him, a searing rebuke that was repeated at both officers’ funerals.

The unions have demanded that de Blasio apologize. The mayor has refused, and his aides say he has no plans to reconsider.

Many leaders in the black community—a key piece of the mayor’s political base—have expressed anger at any possible apology, furthering the mayor’s resolve not to do so, according to an administration official who was not authorized to speak about private conversations and spoke to The Associated Press on condition of anonymity.

“What is really needed is for the dialogue between the two sides to continue.”
— Phil Walzak, de Blasio spokesman

One union suggested an outside peacemaker, former President Clinton, be brought in, but he declined.

But another powerful political figure may soon insert himself into the fray.
Cuomo devoted portions of his inaugural address and his father’s funeral to call for an end to the hostilities between City Hall and the police. Cuomo has, at times, seemingly made it sport to tangle with de Blasio’s agenda but an attempt to interject himself into a city issue is unlikely to be embraced by the mayor’s staff.

“While the mayor has respect for the names floated, that’s not what is needed to move the ball forward,” said Phil Walzak, de Blasio spokesman.

“What is really needed is for the dialogue between the two sides to continue.”

The five police unions have been working on expired contracts since 2010, and City Hall officials believed that fueled much of the rank-and-file discontent before the Garner decision.

The captains’ union has already taken a deal. Two others—those representing detectives and sergeants—may not be too far from a new contract.

The PBA has refused to accept a deal similar to what the other public workers unions, including the teachers, accepted last year. The PBA is in arbitration but could opt out for the right pact.
But experts believe it would be risky for City Hall to suddenly appear to cave.
“You don’t want to be seen like you’re giving in to demands,” said Doug Muzzio, political science professor at Baruch College.

De Blasio’s aides take pains to note that he frequently praises police, but he has of late grown even more complimentary, twice calling them the “world’s greatest” police force.

“I hope he will be able to see that cops in the city have stratospheric levels of dissatisfaction,” said Eugene O’Donnell, professor at John Jay College of Criminal Justice.

One controversial voice has been conspicuously cut out of de Blasio’s inner circle: Sharpton. The mayor has not spoken to him in weeks, according to the official.

Bratton, meanwhile, remains well-liked by both City Hall and the rank-and-file police, and he has been repeatedly placed front and center by the de Blasio administration in recent weeks.

And de Blasio’s team may soon get a clearer glimpse into how much work he has to do: The first independent poll conducted after the police shooting is expected to be released this week.