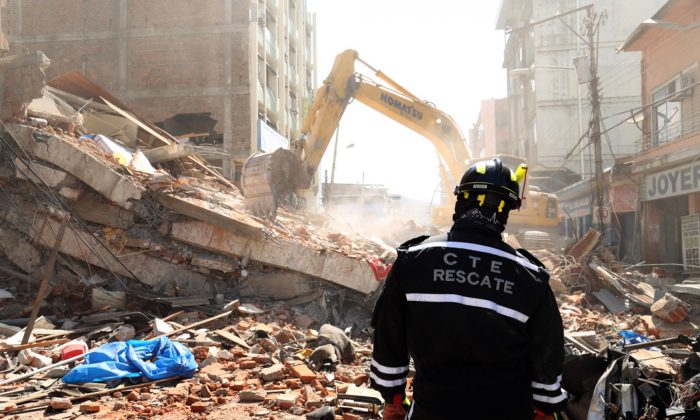 A rescue worker looks as heavy machinery removes the debris of a collapsed building in Portoviejo, Ecuador, on April 17, 2016. A magnitude-7.8 quake, the strongest since 1979, hit Ecuador flattening buildings, buckling highways along its Pacific coast and killing hundreds. (AP Photo/Carlos Sacoto)
News

A magnitude 6.5 earthquake struck Japan on Friday, causing widespread injuries and property damage. Then on Saturday evening, a magnitude 7.8 earthquake hit Ecuador on the other side of the Pacific, collapsing buildings and killing more than 350 people.

With two large earthquakes happening only days apart, it might look like they’re connected. But how earthquakes influence each other is rather complex, particularly over long distances.

The local perturbations caused by the sudden shift of rock mass across a large rupture results in a cascade of smaller earthquakes, called aftershocks, at distances roughly equivalent to the length of initial fault rupture. Aftershock rates peak immediately following the mainshock and decay exponentially with time.

However, if nearby faults are locked and already stressed, more damaging earthquakes may be triggered in the short term. The 2004 Sumatra magnitude (Mw) 9.2 and 2005 Mw 8.6 Nias earthquakes are the best known examples of short-term “clustering” of very large quakes.

A clear message from earthquake scientists to the public is that the most dangerous time for future large earthquakes in an affected region is immediately (within days to weeks) following a major earthquake.

Certainly, authorities in Ecuador, Panama, Colombia, and Peru will be well aware of the importance of reiterating future hazards to the region posed by aftershocks, other strong earthquakes, tsunami, and other earthquake-triggered hazards in the aftermath of the Mw 7.8 earthquake on Saturday.

Large earthquakes send out seismic “shivers” that are recorded by seismographs around the globe. As these seismic surface waves pass through distant fault zones, they do occasionally trigger small earthquakes.

How long is too long before a local increase in earthquake activity can be linked to a preceding quake?

Are the Earthquakes in Ecuador and Japan Related?

Therein lies a challenge that transcends seismic catalogues alone, requiring both rigorous statistical analysis and an analysis of the geologic conditions that could favor long time delays.

What we do know is that the transient stresses induced by large earthquakes are very small at remote distances, but perhaps not too small to influence the frequency of earthquakes in other regions.

What we also know is that the rate of global earthquakes is not steady. For example, the rate of large earthquakes since 2004 is more than double the rate averaged over the preceding century.

A similar cluster of large global earthquakes occurred between 1950 and 1965. To date, the reasons for the apparent multidecadal changes in seismic energy release rate remain poorly understood.

The April 15, 2016, Mw 7.0 Japanese earthquake occurred as the result of strike-slip faulting. It was centered around 10 kilometers depth and ruptured an area around 50-kilometer long.

Effects of the Japanese earthquake include landslides, liquefaction, ground failure, and building damage.

It was similar in style and dimensions of rupture and shaking to the 2010 Mw 7.1 Darfield earthquake near Christchurch New Zealand.

Aftershocks pose a major hazard, particularly to structures compromised by prior shaking. However, the Japanese earthquake occurred in a region that is frequently affected by seismic shaking from strong earthquakes, so the occurrence of this event should be no real surprise.

The April 16, 2016, Mw 7.8 earthquake offshore of the west coast of northern Ecuador occurred as the result of shallow thrust faulting on or near the plate boundary between the subducting Nazca and overriding South American tectonic plates.

Aftershocks Rattle Japan as Deaths From Quakes Rise to 45

In Quake-Devastated Ecuador, Loss Piles Up Amid the Rubble

The location and mechanism of the earthquake is consistent slip on the large thrust fault (i.e. megathrust), between these two major plates. The rupture length is estimated at 160 kilometers.

Earthquakes of this nature are relatively common in this region, even over historical timescales. The same plate boundary zone extending all the way along the western boundary of South America has produced the 1960 Valdivia quake—the largest ever recorded—and so again its rupture in Ecuador should be no particular surprise.

Any dynamic stresses induced by the Japanese earthquake at the site of the impending earthquake on the subduction zone west of Ecuador would pale in comparison to the local stresses accumulated from subduction of the Nazca plate, the relevant segment of which last ruptured in a large earthquake in 1942.

So the Japanese and Ecuador earthquakes were both large and damaging, and they occurred only days apart. This naturally triggers a great deal of media attention, and it’s easy to assume there is a link.

But the time delay between the Japanese and Ecuador events precludes any clear causal linkage on temporal grounds. Rather they are the natural consequence of the ongoing activity that surrounds the Pacific basin, in the so-called “ring of fire,” during a period of somewhat heightened seismic energy release.

Mark Quigley is an associate professor at the University of Melbourne (UNIMELB) in Australia. Mike Sandiford is a professor of geology at UNIMELB. This article was originally published on The Conversation.