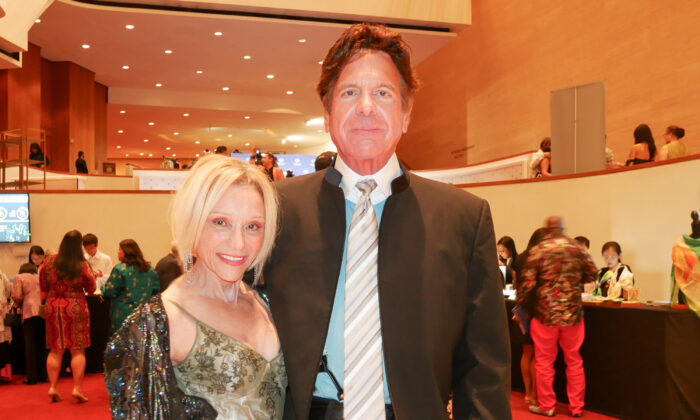 Dennis Mezzatesta and Margo Miller at the Jones Hall for the Performing Arts, in Houston, on June 4, 2022. (Sherry Dong/The Epoch Times)

HOUSTON, Texas—Delighted by Shen Yun Performing Arts for the fifth time, Dennis Mezzatesta, a chemical engineer and CEO, said on a scale of one to ten, this year’s performance was a “10 absolutely!”

“Put more [performances] out for us Houstonians and we will be here,” he said.

“I’ve been to 5 different ones over the years. If we find another one, we will be back, it’s wonderful!”

Based in New York, Shen Yun is the world’s premier classical Chinese dance company. With a mission to revive the 5,000 years of traditional Chinese culture, Shen Yun presents mini-dramas accompanied by a live orchestra that highlights the value and virtues of the ancient culture through the story-based dances that tell tales from ancient times to the modern-day.

“I was very emotional a couple of times,” said Ms. Miller, “Just looking at so much beauty all at once: the costumes, the color, the expressions on the dancer’s faces—I teared up it was so beautiful!”

Both Mr. Mezzatesta and Ms. Miller were fascinated by the company’s patented method of integrating a 3D animated backdrop with the stage performance. It allows the performers to travel back and forth between the stage and the background projection.

“It was perfection—perfect,” she said.

The one criticism that Mr. Mezzatesta had was that there weren’t enough Shen Yun performances worldwide.

Since the company’s inception in 2006, Shen Yun has grown from one to seven equally large companies that tour the world simultaneously. Each year they showcase a brand new show with new music, new dances, and new costumes.

Mr. Mezzatesta commented that with the increasing demand of the audience’s desire to see Shen Yun, some even returning for consecutive years, there were still not enough performances for the crowded concert halls.

“Not enough people are going to be able to see this production so that’s why we need more of them,” he said.

“[Shen Yun] brought out a culture that we don’t see, usually we see the government regulations there and communism. What I see is human beings with freedom and creativity that needs to come out more. And that’s what I think is a blessing that [Shen Yun] brought us,” he added

“We value freedom so much, so to see this and to see the culture be lost or not disseminated throughout the world would be a tragedy.”