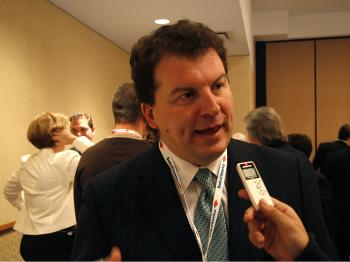 The Price of a Bubble

Joshua Philipp
Joshua Philipp is an award-winning investigative reporter with The Epoch Times and host of EpochTV's "Crossroads" program. He is a recognized expert on unrestricted warfare, asymmetrical hybrid warfare, subversion, and historical perspectives on today’s issues. His 10-plus years of research and investigations on the Chinese Communist Party, subversion, and related topics give him unique insight into the global threat and political landscape.
View profile
Follow
biggersmaller
Print
Jonathan Miller always seems to be right. Miller is the co-founder and president/CEO of Miller Samuel Inc, one of New York’s top appraisals and consultation companies. He’s known for his spot-on appraisals of home value, but that’s not all he’s great at predicting.

“In 2005 … 75 percent of all real estate appraisals that were done for mortgage purposes weren’t worth the paper they were written on,” said Miller. “I said, we’re looking at a financial crisis larger than the S&L crisis of the late 1980s. That was in 2005 I said that.” That’s right, while government officials now claim they never could have seen saw this crisis coming, Miller had been watching with a weary eye for a few years now.

“It was like screaming in a closet. No one listened because everybody was making money and there was an assumption that there was no victim, which is really amazing because ultimately the banks are insured, and ultimately the taxpayer will pay. That’s exactly what happened,”

The situation began getting sticky in 2004, Miller said. “We were subject to intense pressure to make values higher and we wouldn’t do it. The market was rising very quickly, it wasn’t rational, and with a lot of them the values really couldn’t be supported,” he said. “We wouldn’t do that because that isn’t what we’re here for, but many of my other colleagues in my profession did and I got very frustrated because nobody seemed to get that we were going to have a problem.”

The housing phenomenon was artificial from the beginning. “We did not have a housing boom, we had a mortgage boom. So basically if you had a pulse you could get a mortgage. I’m exaggerating, but really, liar loans they were called…Nobody was really concerned with whether you could repay your mortgage because it was being packaged and sold off to an unwitting investor who had no idea. It worked until the market started slowing down. The other idea is that when you look at lending institutions or banks, for 50 or 70 years there were very sound lending practices in banks. Then our basis of comparison was we had a three or four year window where they lost their way. Now they and the taxpayers are paying for it.”

Now that the housing blister has burst, the wound is beginning to heal, albeit it’s off to a rocky start. “The normalcy concept means: go back to lending standards before we had this boom,” Miller said. But he warns that the past few years cannot be fairly compared to the decades before the boom. “That is not a basis of comparison; it’s an anomaly and it was actually very damaging to our economy. In the long run, I’m very happy that lenders are returning to more solid thinking, but what they are doing right now (not lending) is going too far to the other extreme because they’ve become so detached from the understanding of risk and value with real estate property and people’s capacity to repay, that they have to learn that all over again so they’re just pulling back until they get a grip.”

Miller said that government bailouts, though not directly aiding consumers, are an abstract way of helping the markets along. “You can see that all the money that was floated to [lenders] from the U.S. Treasury didn’t go to the consumer for lending. It went to solidify or shore up their balance sheets so that they wouldn’t go out of business and so that they would feel comfortable trading with other lenders.

“I think that the whole objective of the treasury’s actions, what FDIC wants to do…is restore trust between all the parties involved in real estate. Until that happens there won’t be any liquidity. That’s sort of the macro objective of all of this. Until that happens it will only get worse, but I’m optimistic that we’re going in the right direction. I think 2009 will certainly see more liquidity but it will still be a very difficult real estate market.”