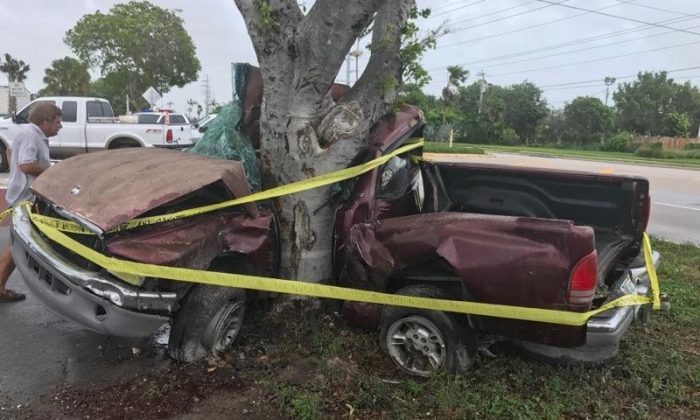 A man died when his pickup truck crashed into a tree in the Florida Keys during Hurricane Irma in Florida, U.S. in this handout photo obtained by Reuters September 10, 2017. Monroe County Sheriff's Department/Handout via REUTERS
US

Hurricane Irma has left thousands in desperate conditions after dragging and dumping the Atlantic Ocean onto the Florida Keys.

Trees blanket streets where boats lie stranded, heaved from the ocean and cast ashore, their propellers twirling in the wind.

Some houses were thrown from their foundations and shoved hundreds of feet away. RVs fared worse, toppled like dominos after having been flung from holiday parking spots. Roads in some areas have been left half-peeled, slabs of asphalt stripped away, and ocean-side shoulders are gone, having been eaten by waves from the storm surge.

Key West got running water back on Monday morning—for two hours—after the county turned on the aqueduct for a pre-planned window.

“This is NON POTABLE water, must be boiled before drinking, and will only be available for a 2-HOUR period of time,” warned the county.

Trice Denny, the spokesperson for Naval Air Station Key West, was one of the few military personnel not evacuated before the storm.

She said it was like nothing she had ever seen.

“It was incredibly windy,” Denny said. The base was on the edge of the storm’s eye and never got the break that comes when the center passes overhead.

“A lot of trees are down,” she said, but added that most of the military housing appears to be in good condition. “There’s damage to buildings, but it’s not like a tornado, things are not wiped clean,” she said.

At this point, the base is focused on getting their airfield up and running so they can begin flying in supplies and personnel to help with recovery efforts.

“We have no cellphones and no water and no power,” she said. “Nothing in the Keys has power unless you have a generator.”

The region is getting emergency supplies and personnel flown in by military C-130 Hercules air planes.

“This is a humanitarian crisis,” Monroe County Emergency Management Director Martin Senterfitt said in a statement Sunday. “Help is on the way.”

Heavy equipment has begun collecting scattered beach sand, depositing it back to its rightful place beside the ocean.

Heather Carruthers, a Key West district commissioner, has warned evacuated residents that it is not yet the time to return.

“Only ESSENTIAL PERSONNEL will be admitted to the Keys at this time,” she said in a Facebook post.

“There is a tremendous relief effort underway to repair infrastructure, provide emergency communications, bring in supplies and care for victims,” she wrote.

Irma also devoured local favorite Snappers Key Largo, the bar that owner Peter Althuis told CNN he was planning to stay at to ride out the storm.

Althuis and a partner bought the bar for $7.1 million in 2015—now it is completely gone.

Fortunately, Athuis did leave the restaurant before Irma destroyed it.

“After the dust settles, our plan is to rebuild as quickly as possible, better than ever, and keep the party alive at our favorite Florida beach bar!,” Snappers wrote on its website with a link to Athuis’s profanity-colored interview.

President Donald Trump said the full resources of the federal government would be marshaled for states impacted by the storm.

“When Americans are in in need, Americans pull together. And we our one country. And when we face hardship we emerge, closer, stronger and more determined than ever,” he said in a speech at the Pentagon to mark the anniversary of the 9/11 terrorist attacks.