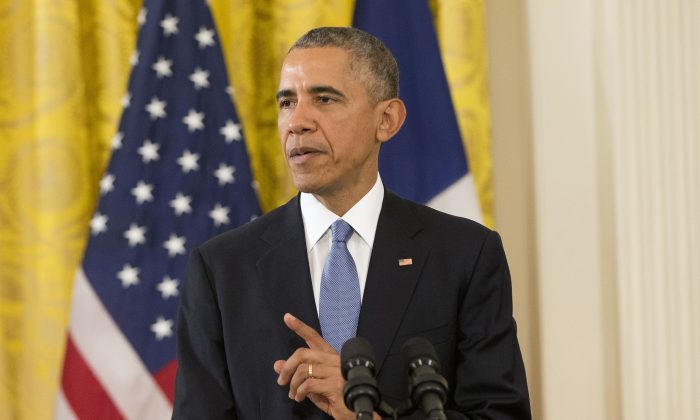 WASHINGTON—The House and Senate are rushing to send President Barack Obama a massive budget package that would fund the entire government through September 2016 and shower tax breaks on working families, businesses and a wide swath of special interests.

Friday’s votes promise to finish up a surprisingly productive, bipartisan burst of late-session legislation in a divided Congress.

Obama has promised to sign the measure, but it must first overcome some resistance. House Democrats are upset over a victory for big oil, while tea party lawmakers say it spends too much money and has too few victories for the Republicans controlling Capitol Hill.

It may squeak through the House on a relatively narrow vote. Top House Democrat Nancy Pelosi of California, a key negotiator, swung forcefully behind the measure Thursday evening, despite her ire over its lifting of the four-decade ban on exporting U.S. crude oil — which most Democrats oppose.

On Thursday, Republicans powered the tax portion of the package past divided Democrats by a 318-109 vote.

Both parties scored political coups. More than 50 expiring tax cuts will be extended, with more than 20 becoming permanent, including credits for companies’ expenditures for research and equipment purchases and reductions for lower-earning families and households with children and college students.

“Finally, with this tax bill, families and businesses are going to have the long-term certainty that they need instead of scrambling year after year to find out what’s next,” declared House Speaker Paul Ryan, R-Wis.

Friday’s House vote comes on the $1.14 trillion spending measure, which would fund the operations of every Cabinet agency. It awards increases of about 6 percent, on average, above tight spending caps that were a relic of a 2011 budget and debt deal — and were opposed by both GOP defense hawks and Democrats seeking boosts in domestic spending.

After House action early Friday, the tax cuts will be bundled with the spending measure and sent to the Senate, which is likely to clear the measure for Obama’s signature before noon — even though presidential candidates such as Marco Rubio, R-Fla., threatened to delay the votes. Then, Congress would adjourn until January.

The budget pact is the last major item in a late-session flurry of bipartisanship in Washington, including easy passage of long-stalled legislation funding highway programs and a rewrite of education programs.

Many on each side saw the budget deal as the best they could get under divided government. The need to win Obama’s signature helped rid the measure of most of the controversial GOP provisions, including efforts to kill federal money for Planned Parenthood, limit the flow of Syrian refugees and undo dozens of Obama actions on the environment, labor, financial regulation and relations with Cuba.

The measure contains large spending boosts for veterans and medical research, and funds a familiar roster of grants for transportation projects, first responders and community development.

It also clears away an almost $1 billion backlog of federal courthouse projects and sends hundreds of millions of dollars to the states and districts of a handful of powerful lawmakers like Thad Cochran, R-Miss., and Harold Rogers, R-Ky., the chairmen of the Appropriations committees.

Also crammed into the two bills are provisions trimming some of the levies that help finance Obama’s prized 2010 health care overhaul. The White House opposed the rollbacks, but Republicans and many Democrats savored them. A tax on medical devices would be suspended for two years, a levy on health insurers would stop for a year and, in a victory for unions, a tax on higher-cost insurance policies would be postponed two years until 2020.

In exchange for ending the oil export ban, Democrats won extensions of tax breaks for alternative power sources such as solar and wind energy.

Other extended tax cuts include breaks for some teachers, commuters, timber investors, electric vehicle owners and makers of hard cider drinks. People in the seven states without income taxes will be able to deduct local sales taxes on their federal returns.