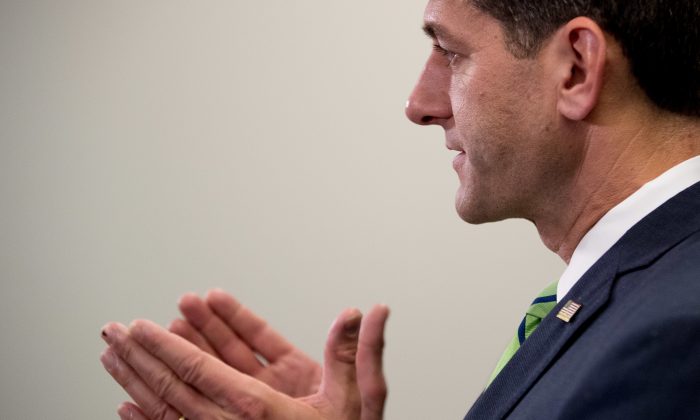 House Speaker Paul Ryan of Wis., during a news conference on Capitol Hill in Washington on Sept. 27, 2016. (AP Photo/Andrew Harnik)
US

WASHINGTON—Congressional leaders have broken a stalemate over money to address the Flint, Michigan, water crisis, top House aides said Wednesday, clearing the way for a spending bill needed to keep the government running until December. The spending measure also would provide long-delayed money to fight Zika.

House Speaker Paul Ryan said the breakthrough on Flint “will help unlock” the short-term government spending bill, which has been stalled in the Senate.

“We should be able to move this through, I believe,” Ryan, R-Wis., said at the Economic Club of Washington.

The deal would avert a potential federal shutdown and comes just three days before the midnight deadline to keep the government open. Ryan said the government “will be funded.”

Charges of racism and campaign-season antagonism between Republicans and Democrats had slowed efforts to pass the spending measure. Democrats had accused Republicans of ignoring the plight of predominantly black Flint, a charge Republicans had rejected.

Ryan did not explicitly say that he had reached an agreement on Flint with House Minority Leader Nancy Pelosi, D-Calif. But aides to the two leaders confirmed the accord early Wednesday. They spoke on condition of anonymity so they could discuss the pact, which has not been announced publicly.

According to House aides, the agreement promises to provide $170 million to help Flint and other cities with water emergencies, the aides said. It would be added as an amendment to a separate water projects bill.

The House was expected to vote on the water legislation containing the Flint provision on Wednesday. The amendment represents a bipartisan agreement authorizing the funding, but the actual money would await the final House-Senate version of the bill after the November election.

Democrats balked on the larger spending bill Tuesday because it didn’t address the Flint crisis. So did a dozen of the Senate’s most conservative members, and the bill stalled in that chamber.

Democrats argued it’s unfair that the water crisis in Flint has gone on for more than a year with no assistance, while Louisiana and other states are getting $500 million for floods that occurred just last month. Democrats have played a strong hand in the negotiations and had leverage because Republicans controlling the House and Senate were eager to avoid a politically harmful shutdown at midnight Friday.

“Democrats have been clear that Congress should not leave Flint and other lead-tainted communities out of any (stopgap spending) negotiation that includes emergency disaster funding,” said Senate Minority Leader Harry Reid, D-Nev., and other top Democrats in a Tuesday morning letter to Senate Majority Leader Mitch McConnell.

The stopgap spending bill would keep the government running through Dec. 9 and provide $1.1 billion in long-delayed funding to fight the spread of the Zika virus and develop a vaccine and improved tests to detect it. Zika can cause can cause grave birth defects.