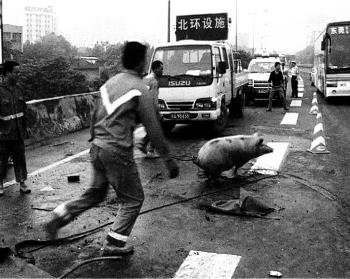 In a scene from 'Disorder,' a pig is chased after an accident on the motorway. (Courtesy of Hotdocs.ca)
Entertainment

TORONTO—“Disorder” is a montage of 20 short videos filmed at a Chinese seaport metropolis depicting the daily life of urban China in 2008. The title aptly represents the film, a disorderly assemblage of videos collected from over 1,000 hours of random YouTube-like footage. The film is a raw and candid look at the China typically hidden from outsiders.

Before screening at the Hot Docs Film Festival, director Huang Weikai stated through his interpreter that one must try to piece together the story in their minds and find meaning behind the often shocking footage.

Containing scenes depicting the utter collapse of morality and social order, “Disorder” truly fits its name. The videos are sometimes shown through a grainy cell phone camera or a night lens displaying only contrast with no colour.

Watching the film, audience members becomes bystanders closely following authorities as they either grapple to bring order to the chaos around them, or seek to benefit from it. The sense of
desperation and fear from all subjects is palpable, as is the sense, especially from the climactic ending, that communist China is a lawless place ready to fall into chaos.

What makes this film truly touching are the portraits of humanity it shows. Throughout we are shown that there is still goodness as people try desperately to help each other through the life and death struggle of the working day. These moments provide a stark contrast to the majority of the footage which is rife with police corruption, looting, and anarchy.

We see an officer try settle a dispute over a counterfeit bill by desperate pleas for a compromise. A two or three month old abandoned baby is left in the pile of rubble it was found in, after an attempt to feed it with formula is unsuccessful. One can gather from this that the only thing holding this society together are the simple acts of kindness and decency.

“Disorder” is a candid look into China and for those born in the West it may be quite difficult to understand the realities of mainland China’s urban life and the mentality of those who have
long lived under communist rule.

At the Q & A session after the screening, Huakai was questioned about the cause of this moral decline in China. He pointed to the growing pains caused by rapid urbanization and explosion in urban expansion as possible causes.

“Why does it seem that people are no longer afraid of authority as they were 10 to 20 years ago?” asked an audience member. Huakai carefully dodged the question but it is apparent that many people are interested it this emerging phenomena in China.

This is an excellent film for those who are interested in an extended visit to China, as a side of China usually not accessible to outsiders can be experienced through the film. This is China from the inside looking out. It can be difficult to watch at times, akin to watching a nature film where you may wonder how the cameraman could remain unmoved by such cruelty.