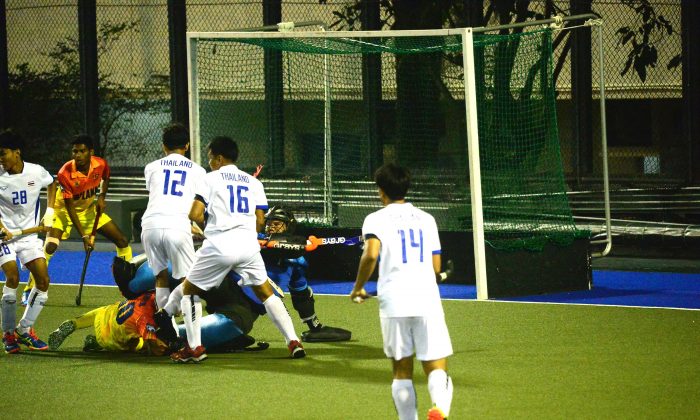 Much credit to Thailand as they repel one of the many Sri Lanka raids in a game ended in a 0-0 draw, in the AKF Cup at King’s Park on Thursday Nov 24, 2016. (Eddie So)
International

HONG KONG—Following completion of the Pool matches in the AHF Cup at King’s Park, Hong Kong, Sri Lanka, Bangladesh and Singapore progress to the Semi-finals

With two draws behind Hong Kong and one defeat, the host nation is looking to redeem themselves starting with their semi-final match against tournament dark horse Sri Lanka on Saturday and hopefully a place in the finals, the following day.

The other semi-final can be expected to be equally action packed with two time defending champions Bangladesh up against Singapore in their bid for a tri-peat. They have been in immaculate form with their 13-0 trashing over luckless Macau on Monday and collecting maximum points from three games to finish Pool A unbeaten.

It’s no wonder the Bangladesh side are attack minded as their coach, Oliver Kurtz, a former German international and center forward, with an Olympic gold medal from the 1992 Barcelona Games, plus a European championship win, knows his trade.

Whereas Sri Lanka drew their only game against Singapore in their preliminary Pool B game 3-3, and added a 2-0 win over Thailand to end their preliminary round, the speedy Sri Lankans will be looking to the form needed to take on the defending champions, to go past Hong Kong and into the final.

However, before that, their first test will be against Hong Kong who have seen their confidence growing by the minute despite an opening defeat at the hands of Bangladesh (4-2). Hong Kong coach Mark Kake is uninterested in results but how the team develops and is impressed with the way his young charges have grown with each passing game.

“We still have a way to go and its good for us to play against teams of this strength,” he said.

Sri Lanka coach Herath Bandara seemed composed too, despite his side playing a lack lusted game against Thailand, whom he complained were ‘man-marking”, making him adopt changes to his side’s game on Thursday evening, but their 2-0 score was enough to see them through.

“We only need to win and is why we were not interested in a high scoring game, also we want to retain our strength for our game against Hong Kong and hopefully if possible, against (champions) Bangladesh,” said Bandara.

His Thai counterpart was equally adamant that they had fared well despite the defeat and being knocked out of the final stages of the tournament and would be intent on doing well in the classification games.