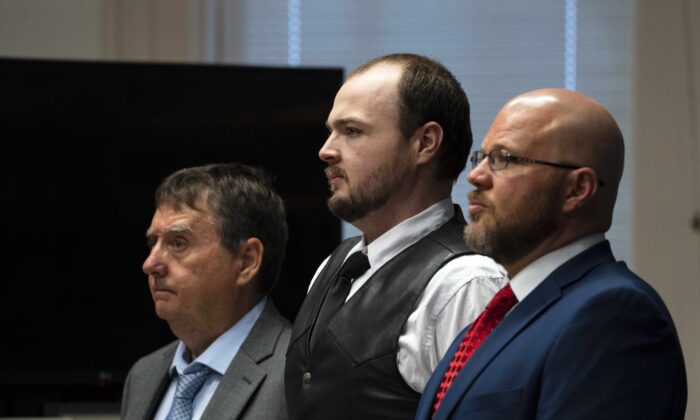 Among the eight homicide victims scattered across four rural Ohio crime scenes, two young women were nursing infants when they were gunned down.

The gunmen spared the babies’ lives. But, at one scene, a singularly sickening scenario unfolded, a prosecutor says.

While his 2-year-old daughter was safe elsewhere, Edward “Jake” Wagner entered a home under the cover of darkness in April 2016.

He approached the toddler’s mother, Hanna May Rhoden, 19, as she lay in bed with a days-old infant, fathered by another man; he was not present.

Hanna Rhoden was the main target of assassination because she and Jake Wagner were locked in a custody battle over their little girl, Special Prosecutor Angela Canepa said.

“Her ‘crime’ was not returning the love of Jake Wagner … and not submitting to the control of the Wagners,” so they executed her, Canepa told a jury Sept. 12.

Before Hanna Rhoden’s former lover opened fire on her, she looked up at him. Jake Wagner shot her twice in the head.

Then, Wagner repositioned Rhoden’s body so that her newborn daughter “could nurse if she wanted to,” Canepa said, recounting the confession of Jake Wagner during the aggravated murder trial of Wagner’s brother, George Washington Wagner IV, in Pike County Common Pleas Court.

“That’s about as bizarre and as despicable as you possibly can get,” said attorney Mike Allen, a legal analyst and former prosecutor who traveled 100 miles from Cincinnati to listen to the opening statements.

“It’s one of the strangest things I have ever heard in a courtroom.”

Yet, Allen said that defense lawyer Richard Nash seemed to make a good impact with his 45-minute address to the jury of nine women and three men.

In Allen’s opinion, Nash’s most effective statement was: “This is a trial just about George. So, as you hear the evidence in this case … every time you hear ‘the Wagners,’ think of how that applies to George. Every time you hear, ‘they,’ a red flag should be raised.”

Nash also said that Jake Wagner, 29, is “the most deserving of the death penalty,” yet he and his mother, Angela, 51,“conned the state of Ohio” into believing their statements.

As a result of plea deals with those two defendants, all four accused Wagner family members will escape the death penalty, as long as Angela Wagner and Jake Wagner testify truthfully against their alleged co-conspirators: George Wagner IV and his father, George “Billy” Wagner, 51.

Jake and Angela Wagner pleaded guilty last year and are awaiting sentencing pending the outcomes of their relatives’ trials.

The younger George Wagner is the first defendant to stand trial for the internationally publicized Pike County massacre that left Hanna Rhoden and seven of her family members dead; most were shot as they slept.

He faces 22 charges including eight counts of aggravated murder.

Unbeknown to most people, the defendant is standing trial while wearing an electronic vest that could be used to stun him into compliance, concealed beneath his dress shirt, necktie and black leather vest.

Authorities acknowledge that the 30-year-old man who is now on trial did not shoot anyone. But Canepa asserted that he helped plan the ambush.

If that’s true, under Ohio law, he is just as guilty as if he pulled the trigger. His brother, Jake Wagner, admitted to killing five of the victims, including Hanna Rhoden.

While Canepa asserted that the entire Wagner clan made important decisions as a cohesive family, Nash portrayed his client as an outsider who was unaware of the Rhoden slayings and was uninvolved.

George Wagner cannot help that “he was born into a family of con artists and thieves,” Nash said.

Although George Wagner acknowledged his family had done bad things, “he never would have imagined that they would have committed crimes like these,” Nash said.

He also ran away from home at 16, as soon as he got his driver’s license, Nash said.

As Canepa spoke, she repeatedly reminded jurors about the layout of various locations that they visited more than a week ago, including the slaying scenes.

Three of them are within walking distance of each other.

Opening statements had been set for Sept. 6 but were delayed until Sept. 12 because a person crucial to the case was ill, officials said.

The case stands out in Ohio history as one of the deadliest and, without question, the most complex.

Authorities investigated more than 1,000 tips and followed the Wagners’ movements from Ohio, to Alaska, and back.

They also probed the possible involvement of drug cartels because they found marijuana growing operations on the victims’ properties.

The four Wagners were arrested in 2018, more than two years after the massacre.

One Ohio Case Was Deadlier

However, the Easter 1975 slayings of the Ruppert family claimed more victims.

In that case, 11 relatives died at the hands of James Ruppert, who was 88 when he died in prison earlier this year; he had been found not guilty by reason of insanity in nine of the slayings.

Ruppert, then 40, had been aggravated over money problems and his mother’s threat to evict him because he couldn’t hold down a job. He fired 35 rounds from four guns, then called police to report the shooting, according to various news accounts.

For many people who live in and near the city of Hamilton, Butler County, about 110 miles northeast of Pike County, the Rhoden case has revived old memories of the Ruppert slayings.

Ruppert’s victims ranged from his 65-year-old mother to his 4-year-old nephew. No one at the Ruppert home was left alive.

In the Pike County case, two babies and a toddler were spared.  The surviving 3-year-old answered a panicked knock on the door from an aunt who had discovered the first two victims. Then, when she asked where the child’s father, Clarence “Frankie” Rhoden, was, he pointed down a hallway and said, “Daddy has a lot of blood.”

Among the eight victims, at least three of them were “collateral damage,” Canepa said; they were killed “simply because they were there.”

Besides Hanna Rhoden, the other targeted victims included her father, Christopher Rhoden Sr., 40, and her older brother, Frankie Rhoden, 20. Both knew about Jake Wagner’s allegedly violent behavior toward Hanna and both had the potential to retaliate for the planned slaying of Hanna, Canepa said.

Frankie Rhoden’s fiancee, Hannah “Hazel” Gilley, 20, the other nursing mother, had to be shot because she would have been a witness; the couple’s child, a 6-month-old boy, lay between his slain parents, uninjured.

Canepa said the other unplanned victims were: Christopher Rhoden’s son, Chris Jr., 16, his brother, Kenneth Rhoden, 44, and a cousin, Gary Rhoden, 38.  Christopher Roden’s ex-wife, Dana Manley Rhoden, was supposedly an unintended victim, Canepa said, but she pointed out that the assailants waited for her to come home, then fatally shot her while she used her cellphone.

The killers hacked into a Facebook account to gain information about Hanna Rhoden, including her declaration, sent via private message: “I won’t sign [custody transfer] papers ever. They’ll have to kill me first.”

After discovering that message on Dec. 9, 2015, the Wagners’ ire toward Hanna Rhoden escalated, along with fears for the safety of the daughter she and Jake Wagner had together in 2013.

Who Hatched the Plan?

Jake and Angela Wagner’s stories matched for the most part, Canepa said, but conflicted on who first came up with the idea to kill Hanna Rhoden.

In any case, the plot “snowballed” to the point where the Wagners agreed they would kill anyone who happened to be present on the night of the attack, Canepa said. She didn’t explain why the children were spared.

In early 2016, the Wagners allegedly began planning the killings.

Canepa said that, according to Jake Wagner’s confession, he wore one pair of the shoes, which left prints at a crime scene, and his brother, George, wore the other. A nationally recognized expert in shoe-print analysis is expected to testify in the trial, Canepa said.

Hours before the Thursday night attack, Jake Wagner said he watched a film, Boondock Saints 2, featuring one of his favorite actors, Norman Reedus.

He also stars in the zombie-apocalypse TV series, The Walking Dead, which Jake Wagner frequently watched.

Jake Wagner said he and his brother, George, dyed their hair darker to look more like the brothers in the movie, who are vigilante killers. The hair dye also served to help conceal their identities, Canepa said.

After the slayings, which started with George “Billy” Wagner killing his best friend, Christopher Rhoden, the killers took many steps to cover their tracks at the crime scenes, including taking the victims’ phones, Canepa said.

The carnage could have been worse, Canepa said, because circumstances kept several normal overnight visitors away from the Rhodens’ residences. She said the Wagners “absolutely would have killed” them, too.

Spectators, including more than a dozen members of the Rhoden family, listened silently despite the graphic and chilling scenarios that Canepa described.

Everyone in court is under Judge Randy Deering’s strict order forbidding reactions of any kind during the murder trial of George Wagner, which is expected to last up to eight weeks.

Eric Evans, a disabled construction worker who worked with the father of Dana Manley, drove 40 minutes to attend the trial out of curiosity.

He told The Epoch Times: “I’ve never sat in on a trial before. I guess I wanted my first one to start off with a bang.

“It’s an awful case that hopefully will happen only once in a lifetime.”