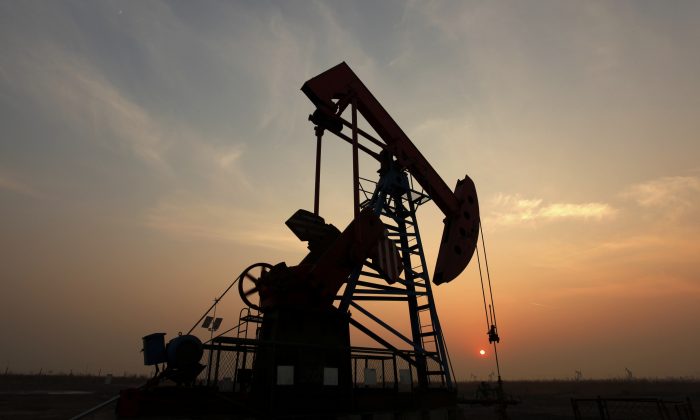 The silhouette of an oil pump. (zhengzaishuru/iStock)
Business & Economy

Have oil prices reached the bottom? Goldman Sachs is suggesting oil could hit $20. Although no one has a crystal ball, there is increasing acceptance that a price recovery could take years.

World oil prices stayed fairly stable, at around $110 a barrel between 2010 and mid-2014. However the prices have collapsed by more than half since July 2014, causing flux in the energy sector.

Goldman Sachs expects “lower-for-longer” oil prices. “We are moving into an environment that reinforces commodity prices to be lower not higher,” said the bank.

“We are witnessing a market cycle similar to what we witnessed in the mid-1980s and there are real economic reasons why,” said Goldman Sachs.

“Both cycles were driven by large increases in supply and while there was some slowdown in demand, demand did not contract,” said Goldman Sachs.

The meaning of “longer” may sound ambiguous. However, it took 15 years for oil prices to rise after the collapse of 1985.

However, OPEC’s definition of “longer” is not quite that long. The organization is assuming the oil price will rise gradually to $80 a barrel in 2020, as supply growth outside the group weakens.

“A forecast of $80 barrel five years out is certainly not demanding from an historical perspective” said Edison Investment Research, referring to OPEC’s forecast.

Royal Dutch Shell (RDS.A) expects oil prices to recover gradually over the next five years. “Our oil price cash break-even point over the last 12 months has been around $60 a barrel,” said the company.

Storage utilization in the United States and Europe is alarmingly high according to Goldman Sachs, which can serve to further depress the oil price.

“Such high distillate storage utilization has two precedents, leading in both cases to storage capacity running out in the springs of 1998 and 2009, pushing runs and crude oil prices and timespreads sharply lower,” said the bank in its recent report.

Ratings agency Moody’s has recently lowered its 2016 price assumptions for Brent crude and WTI crude by $4 to $53 and $48 per barrel, respectively.

“We believe that oil prices will remain lower for a longer period, as large built-up inventories and oversupply cause oil prices to increase at a slower rate,” said Steve Wood, a Moody’s managing director of corporate finance.

Iran, which holds 13 percent of the world’s oil reserves, is expected to place extra pressure on the oil prices in 2016.

Once sanctions are lifted the country will start selling oil swiftly, according to International Energy Agency (EIA). Iran is expected to sell to regular buyers in Asia. It will also try to recapture market share in Europe, which accounted for about 30 percent of pre-sanctions crude sales.

A Win for Consumers

“The decline in oil prices is, on balance, we think a positive for global economic activity. The oil consumers are generally getting a boost,” said Jan Hatzius, the chief economist at Goldman Sachs.

The low oil prices have hugely benefited consumers. It has also helped drive down the cost of gas, which heats many homes.

The decline in gas prices since 2014 will save the average American household $700 in 2015 according to U.S. government projections.

This boost to consumer spending could be here to stay and even strengthen with time, if the gas prices remain low, according to JPMorgan Chase.

However a further price collapse would drop investments in oil projects and prompt thousands of job losses in the sector.

Chevron, the second-largest U.S. oil company, said on Friday, Oct. 31, it will lay off 10 percent of its workforce, up to 7,000 people. The company reported a 64 percent drop in quarterly earnings. And it slashed its 2016 capital budget by 25 percent to offset declining oil prices.

Depressed commodity prices and financing constraints will encourage more companies to merge or sell off assets to strengthen their balance sheets. According to a recent report by PwC Consulting, there is an upsurge in merger and acquisition deals.

“During the third quarter 2015, a total of 51 oil and gas deals took place in the United States, accounting for $91.2 billion, which was higher than the previous quarter,” said the report.