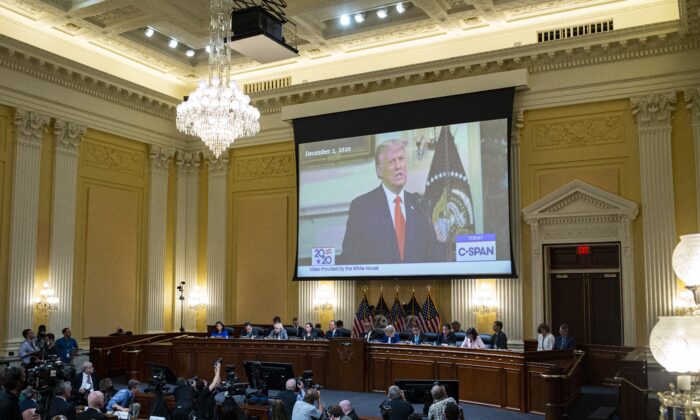 Former President Donald Trump is displayed on a screen during the fourth hearing on the Jan. 6 investigation in the Cannon House Office Building in Washington on June 21, 2022. (Al Drago/Pool via Getty Images)
Viewpoints

In all parliamentary democracies whose legislatures are descended from the British “Mother of Parliaments” in Westminster, there is a rule against what is called “unparliamentary language.” Members are allowed to criticize and even to insult one another, but only within certain limits.

These limits vary from one parliament to another, but all have in common an absolute proscription against any use of the words “lie” and “liar” as the most unparliamentary language of all.

Winston Churchill once famously evaded the Speaker’s wrath in the House of Commons by substituting the euphemism of “terminological inexactitude,” for “lie”—a locution which has gone on to have a life of its own among connoisseurs of irony.

We Americans are not usually counted as being among such connoisseurs. Stateside, irony is typically regarded as suspicious if not downright deceitful, which is one reason why, in spite of occasional attempts by congressional parliamentarians to restrict what members are allowed to say about one another, the rules have tended to be more free and easy on the floor of the legislature here, and virtually non-existent outside of it.

In the early days of the Republic, American statesmen were famous for the scurrility with which they were prepared to attack one another, both directly and through newspaper proxies—including by what the dueling culture of that era might have called the mentito, or the accusation of lying which, for some three centuries past in Europe, had amounted to a challenge to single (and possibly mortal) combat.

I myself can remember a time during my school days in the 1960s when the question, “Are you calling me a liar?” automatically implied a challenge to fisticuffs if the answer was in the affirmative.

As Joanne B. Freeman shows in her book, The Field of Blood: Violence in Congress and the Road to Civil War (Farrar, Straus & Giroux, 2018), this was a tactic often resorted to by members from the Southern states, where the European dueling culture had been transplanted, to expose what they saw as the cowardice of their Yankee colleagues, who were mostly opposed to dueling on religious grounds.

After the purging of such poison, along with the blood shed in the Civil War, a more restrained and gentlemanly standard prevailed for most of the next century—at least until the passions unleashed by the Vietnam war led to some considerable degree of verbal unrestraint.

When anti-war Democrat George McGovern compared the incumbent Richard Nixon, his opponent in the presidential election of 1972, to Hitler, he was only repeating what had become commonplace among his most zealous supporters.

That McGovern lost in a landslide to a man widely known as “Tricky Dick” may not be entirely coincidental.

As late as 2004, when the reductio ad Hitlerum had made a reappearance among the anti-war left of the day, John Kerry resisted the suggestion of Jim Lehrer, moderator of one of that year’s presidential election debates, that he had accused President Bush of “lying to the American people about Iraq.”

“I’ve never used the harshest word, as you did just then,” said Senator Kerry, “and I try not to.” I’m not sure that he tried very hard, but at least he showed an awareness of why it was preferable to say instead that he thought Bush “has not been candid with the American people.”

At that time, even The New York Times was a hold-out for more gentlemanly standards of discourse, but that all went by the board with the advent of Donald Trump. In a column written shortly after the inauguration of Joe Biden, Maureen Dowd gave thanks to the powers that be at the Times under Trump for removing the prohibition, still in place at the paper during the administration of George W. Bush, against calling the President a liar.

By that time, there can hardly have been anyone left in the lately radicalized media who remembered the reason for the restriction on “unparliamentary language” in the first place.

It is that democratic debate—and, therefore, democracy itself—depends absolutely on the presumption by each side of the good faith of the other. The moment that either accuses the other of dishonesty—by, for example, claiming that its argument is “really” only disguised racism, or misogyny or otherwise the product of corrupt motives—debate is at an end, and there is only the exercise of raw power by those lucky enough to possess it at the moment.

This is what we are seeing now with the convening of the January 6 commission, which depends on the assumption of what the media call “the Big Lie” by former President Trump and his supporters of the “stolen” election.

That they might have been mistaken without lying—or even that an honest person might find some reason for doubting the official result in the multifarious irregularities imposed on that election by Democratic partisans in swing states—has had to be ruled out of court from the start.

That’s why the ostensibly bipartisan commission deliberately excluded any Trump sympathizers or supporters.

In other words, whether or not the election was rigged, the hearings certainly have been—which might be thought by some to lend credence to Trump’s allegations.

It seems to me almost axiomatic that the first person to cry “liar!” against another is the more likely of the two to be the liar, since this is the best cover for his own lies.

But now we are never likely to know the truth, since one side has imposed its view on the other by executive fiat and so shut down further debate or investigation.

The wonder is that so many who ought to know better have forgotten why members of Congress customarily style themselves—as British parliamentarians still do—as “Honorable.” Henceforth, we must suppose, that word’s loss of all meaning must be taken for granted.