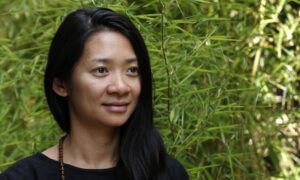 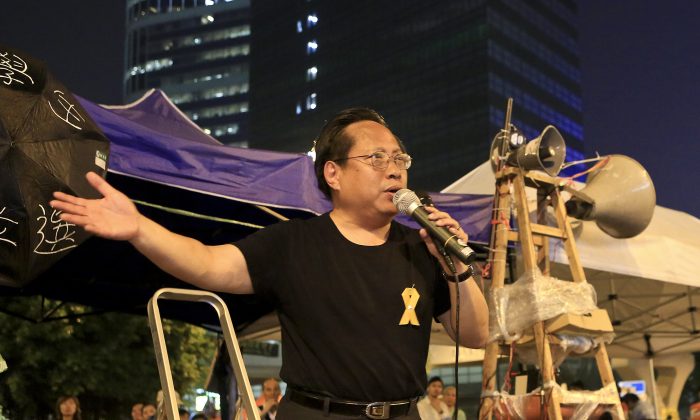 Albert Ho, speaking through a megaphone at the Admiralty occupied zone protest site on Oct. 14. The pan democrats, like Ho, have largely been on the sidelines supporting the student-led umbrella movement. (Yu Kong/Epoch Times)
China

HONG KONG—Andrew To, a longtime member of the so-called pan-democratic political camp in Hong Kong, camped out for a week with students on Harcourt Road, part of the 12-lane highway near government headquarters that young people have taken over as they call for greater democracy.

“We supported the student movement at the beginning,” he said. “I made a speech to support them.”

But To, the former chairman of the League of Social Democrats (LSD), one of the more radical parties in the democratic constellation here, and many of his colleagues, haven’t been able to do much more than that: watch from the sidelines, and offer support, as students engage in unexpected and unprecedented forms of civil disobedience and protest.

The entire Umbrella Movement unexpectedly snapped open before the eyes of old line democracy advocates and politicians, who have since been supporting, or trying and failing to influence it, from the sidelines.

“The original Occupy Central movement was planned by middle-aged people, and they targeted middle-class, middle-aged people to participate,” said Ma Ngok, an associate professor of governance at City University of Hong Kong.

“They thought they would sit down and get cleared away in a few days,” he said.

But when an initial student class boycott beginning on Sept. 22 turned into a storming of Civic Square days later, and then the lengthy detention of the young firebrands Joshua Wong and Alex Chow, and finally the use of tear gas and pepper spray against unarmed teenagers, the movement took on a life of its own.

Law professor Benny Tai, one of the original organizers of Occupy Central, on Sept. 27 called for the “occupation” to start several days before it was actually planned, on Oct. 1. His planned occupation, which would take place in Hong Kong’s financial district, and last only a few days, resulting in thousands of arrests, never got off the ground.

The older generation has since then been playing catch-up to a movement that neither they—nor any one other person—has control over.

“We’ve called on the government to have a dialogue with the students, but … we can’t control it,” said To, the former chairman of the League of Social Democrats. “This student movement was started by the students,” he said. “They didn’t ask us about it. But we’re supportive.”

To’s successor in the LSD, Legislative Council member Leung Kwok-hung, also known as “Long Hair” for his formerly shaggy mane, sometimes appears at rallies and unexpectedly around the occupied zone—often with a loudspeaker, dispensing advice. But at a major rally marking one month of the movement on Tuesday, he appeared hours before the main organizers, speaking by himself, not alongside them on the same podium.

Nelson Wong Sing-chi, a former pan-democratic legislator, seemed frustrated at the apparently unrealistic demands of the students, as well as their inability to compromise, and, not least of all, the way they have pointedly kept the democratic political camp out of their negotiations with the government.

The democratic members of Hong Kong’s legislature, called the LegCo, is a crucial piece of the puzzle when it comes to passing any motion on electoral reform, because it holds the power to veto any proposal for a change in the process.

But lawmakers are also more likely to be willing to work out what can be achieved within the framework laid down by Beijing, rather than engaging in extraordinary actions, like taking over roadways. Such actions directly challenge the legitimacy of the government.

“The protesters in Admiralty, Causeway Bay, and Mong Kok are not in our control. They go out on their own will and voice their opinions,” said Wong, the former pro-democracy lawmaker, who still keeps a hand in Hong Kong politics.

“We find that there are so many youngsters who don’t want to get any reasonable result,” he said. He was commenting on how they continue to insist that the Aug. 31 decision of the National People’s Congress Standing Committee in mainland China, which put a tight leash on democracy in Hong Kong, be rejected.

“It’s not easy to get a result if the youngsters only want to reject the Standing Committee decision. They could find other ways to express their voice to the government, and we could get some universal suffrage,” he said. “I think that would be better. But now, I can’t see any result in the end.”

The lack of trust in the democracy old guard, which is characterized by internal fighting, factions, and the usual politicking, is likely driving the divide and the approach the young people have taken.

“The students and Occupy Central people don’t like to connect themselves with the politicians,” said Jimmy Lai, founder of the openly pro-democracy Apple Daily, during an interview at the Admiralty occupied zone last week. “That’s why they [the politicians] are keeping a very low profile.”

Members of the pan-democratic camp can often be seen chatting and idling around the main protest site—partly they haven’t tried to take a more high-profile role because they haven’t been asked to, but also “by allowing the students to take control of it, that will lead to more sympathy and support,” said Ma Ngok. “Those politicians know that the general public may not have too much trust in them … I think they realized it’s better to take a back seat.”

Albert Ho, as former chairman of the Democracy Party from 2006–2012, is an establishment voice in the pan-democratic camp. “We’ve been very supportive of the movement the whole time,” he said. “It turned out to be different in form and scale than we anticipated—but the central concept is still civil disobedience.”

The biggest sticking point is still the Hong Kong government, and its masters in Beijing. As time drags on, public sympathy with the protesters may change.

Ho remarked that the differences in views between two generations of activists—pan democrats, who are concerned about safety and gaining realistic concessions, and the younger occupiers, who have given nary a thought to an end game—are largely instinctual.

“Hong Kong has made history, and also shown that we are extremely vibrant and extremely dynamic and energetic about democracy. The leaders have to understand that Hong Kong will hardly be effectively governable if there is such a dissatisfied younger generation,” he said.

Ho added: “They’ve got to realize that they have to cater to these people—that it’s unreasonable to turn an open society into a closed society.”

Some worried that the student protests may set back long-term democratic efforts for Hong Kong, if they engender too much public anger. “It’s too early to give an assessment,” Ho said. But, he added, “after all, we have nothing to lose.”