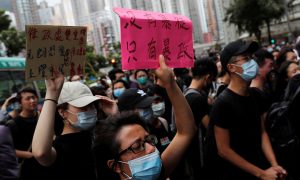 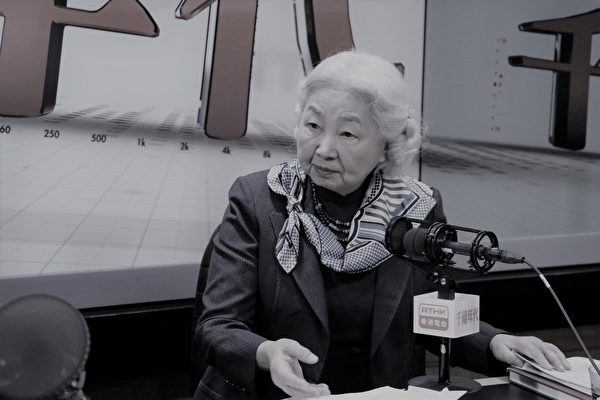 Elsie Leung Oi-sie, Hong Kong’s former vice-chairwoman of the Basic Law Committee, said there is presently no need for China to deploy its People’s Liberation Army (PLA) troops in Hong Kong to intervene with the ongoing protests. (The Epoch Times)
HK Current Affairs

Hong Kong’s pro-Beijing camp appears to have softened its stance on the ongoing protests after President Donald Trump warned China that a violent crackdown on the city’s protesters could hurt the ongoing trade negotiations.

Hong Kong’s former vice-chairwoman of the Basic Law Committee, Elsie Leung Oi-sie, said on Aug. 18 there is presently no need for China to deploy its People’s Liberation Army (PLA) troops in Hong Kong to intervene with the ongoing protests because the situation in the city is more of a social order than a national security issue. Leung’s statement is in sharp contrast to the previous tough and intimidating announcements from Beijing representatives.

The protests are now in their 11th week, with millions of Hongkongers demanding that the government permanently withdraw an extradition bill, as they fear that anyone living or traveling in Hong Kong could be transferred to China for trial, if Beijing names the person as a criminal suspect. In addition, other demands have been added, such as universal suffrage in the city’s elections and an independent investigation into police violence in dealing with protesters.

Leung, a pro-Beijing Hong Kong politician and former Secretary for Justice of Hong Kong, is one of the founding members of the Democratic Alliance for the Betterment of Hong Kong, believed by many to be the Chinese Communist Party’s earliest underground organization in the city. She usually acts as the spokesperson for Hong Kong’s pro-Beijing camp on critical issues in regards to the city’s relationship with Beijing.

Armed Police in Shenzhen ‘Not Intended to Intimidate’

Under Article 18 of Hong Kong’s Basic Law, the city’s constitution, in the event that China’s Standing Committee of the National People’s Congress “decides to declare a state of war or, by reason of turmoil within the Hong Kong Special Administrative Region which endangers national unity or security and is beyond the control of the government of the Region, decides that the Region is in a state of emergency,” the Chinese central government “may issue an order applying the relevant national laws” in Hong Kong.

Responding to reporters during a radio interview on Aug. 18, Leung said she doesn’t think the current situation in Hong Kong would call for the implementation of Article 18, adding that the acts of smearing the national flag and national emblem by a few protesters were only a “petty offense.”

Only a few days ago, the Liaison Office in Hong Kong—Beijing’s main representative—made a big fuss over the smearing acts, calling them a crime that has “challenged national sovereignty and dignity” and “violated the bottomline of the ‘one country, two systems’ principle.”

Leung also said that the gathering of tens of thousands of armed police in Shenzhen, as caught on video by international media groups, is for the preparation of the 70th anniversary of the founding of the People’s Republic of China and is not intended to intimidate Hong Kong’s protesters.

She mentioned that according to Article 14 of the Basic Law, Hong Kong leaders may ask the central government in Beijing to order the PLA’s Hong Kong garrison to provide assistance when necessary, and the Hong Kong government would be in control of initiating the request. In addition, soldiers of the garrison must follow the Garrison Law and the Law of Hong Kong.

Leung stressed that even in the event of a deployment of the garrison, it wouldn’t mean the end of the “one country, two systems” principle.

Prior to Leung’s statements on Aug. 18, Beijing had made tough and intimidating announcements through its two main bodies handling Hong Kong affairs—the Hong Kong and Macau Affairs Office and the Liaison Office. The protests were classified as riots that “have gone beyond the scope of freedom of speech” and the Beijing spokesperson threatened to punish “all the criminals.”

Leung’s statements are in sharp contrast to these earlier announcements and a clear indication that Beijing has softened its stance in the handling of Hong Kong protests.

On Aug. 18, Trump warned Beijing that a violent crackdown on protesters in Hong Kong would harm the ongoing trade talks between the two countries.

“I think it’d be very hard to deal [with] if they do violence, I mean, if it’s another Tiananmen Square,” Trump told reporters in New Jersey, adding that he supported liberty and democracy in Hong Kong.

In a Twitter post on Aug. 14, Trump wrote: “Of course, China wants to make a deal. Let them work humanely with Hong Kong first!”

Shi Zangshan, a Washington D.C.-based China expert, says Beijing’s change of tone should be attributed to the Trump administration’s strong support of the Hong Kong protesters.

Shi said that after Trump warned Beijing that a violent crackdown in Hong Kong would harm the U.S.-China trade talks, a number of U.S. congressmen also openly supported the ongoing pro-democracy movement in Hong Kong and condemned the police brutality. Beijing then immediately stopped its harsh rhetoric.

Shi called on Hongkongers to keep up the momentum.

“If Beijing doesn’t dare to deploy the PLA troops to Hong Kong at this stage, it will be even more difficult for them to do so in the future because the international community will have seen its true face—a paper tiger,” he said.

“They will realize that China is embroiled in both domestic and external crises and doesn’t have the capacity to ward off all these troubles.”