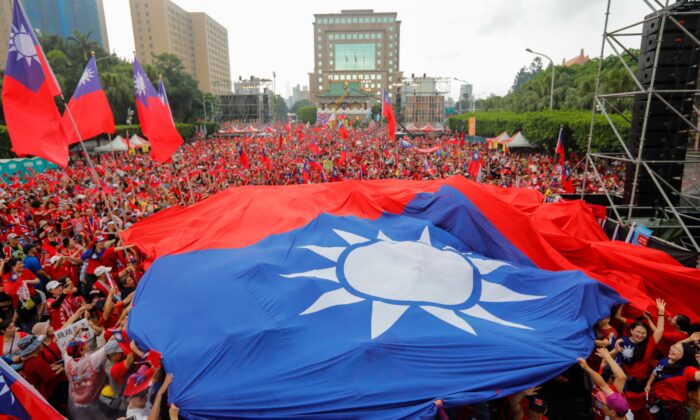 OVER THE WESTERN PACIFIC—Taiwan is holding its presidential election on Jan. 11.

Elections are held everywhere—or close to everywhere. And we do have a full plate of imminent concerns—impeachment, Iran, the coming election and primaries, and the coming climate armageddon supposedly about to destroy life as we know it, and healthcare, not to mention school choice and the Jeffrey Epstein mystery and all those potholes and… and…

Well, sorry, you can add Taiwan to your ledger of worries.

You don’t need me to tell you that China is worry number one and every Taiwanese election is primarily (there are other issues, of course) about whether they—a prospering capitalist democracy—will allow themselves be engulfed by the communist behemoth just a few watery miles to their west.

Not exactly, however, because the consensus on the island, I’m told, is that they do not want to fuse with the People’s Republic. It’s just that some people do business with their neighbor—a lot of people in fact and a lot of business. Its hard to resist, which is why some people find a closer link advantageous.

Which brings us to reason number two, aka the elephant in the room: Hong Kong.

We all know what’s been going on there—nonstop physically and emotionally demanding protest demonstrations to preserve their autonomy from China. This would be under the “one nation, two systems” agreed upon when the British left, a structure which, incidentally, China’s leader Xi Jinping recently offered to Taiwan as an “inducement” to come aboard.

Some inducement. What’s going on in the streets of Hong Kong, as well as Xi’s offer, if you can call it that, have helped make the incumbent President Tsai Ing-wen the favorite for reelection, despite having trailed in the polls until recently and her party—the DPP—having done poorly in (again, a recent) elections. Tsai wants to keep as far from the PRC as possible and the electorate appears to agree—or so I am also told. (Her major opposition is Kaoshiung Mayor Han who is a member of the old Kuomintang Party.)

Am I a Taiwan expert writing this?

Not at all. The closest I have ever been to Taiwan is visiting the People’s Republic of China on an “activist’s tour” in 1979! I was a different person then—more on the left—and the PRC a different place, superficially anyway. Everyone was dressed in Mao suits and the people, who had never seen Westerners before, trailed us down the streets, sometimes in crowds of as many as three hundred.

The only other group of foreigners in China at the time was the Ethiopian volleyball team. (I kid you not.) We would bump into them—supposedly casually on our heavily managed tour—at places from the Great Wall to a factory in Manchuria.

Tempus fugit. I am no longer anything close to a leftist and am typing this on a flight from Los Angeles one hour out of Taipei where I am to be a member of a small delegation from the United States to observe their election. Needless to say, it’s an honor, and I’m quite excited.

I cannot remotely guarantee that I will learn much in a few short days, but you will have the good or bad fortune to hear about it. More soon.

Roger L. Simon is a senior political analyst for The Epoch Times.