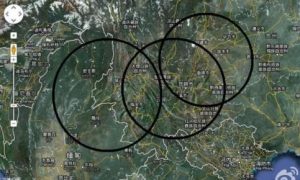 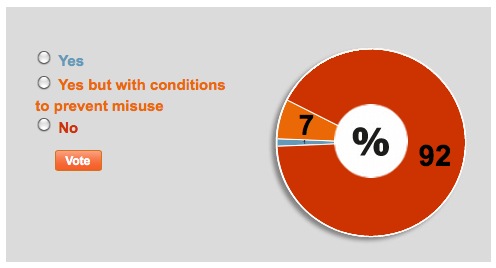 Screenshot showing the South China Morning Post's Internet poll with the majority of voters opposing Chief Executive Leung Chun-ying's proposal to donate HK$100 million to the mainland for earthquake relief. Many Hong Kong residents are afraid the money would be embezzled by Communist Party officials. (The Epoch Times)
China

According to an April 22 Internet poll by South China Morning Post, the majority of Hong Kongers are deeply suspicious of corrupt officials in the Chinese Communist Party (CCP), who might pocket the funds, and of Beijing-backed Leung himself. Residents gave generously after the 2008 quake on the mainland, but later learned a HK$4 million school rebuilt with their money was demolished within a year to make way for luxury homes and only half the money returned.

Nearly 5,000 voted on the poll, with 92 percent saying “no,” 7 percent “yes but with conditions to prevent misuse,” and only about 1 percent said “yes” unconditionally.

Activists and netizens also set up opposition campaigns to block the donation, write letters, and promote a “Don’t donate a single penny” movement.

After hearing about the criticism, Leung said his proposal was based on “love, care, and support for compatriots,” and that distribution of the money would be supervised, the Post reported.

However, Chairwoman of the Democratic Party Emily Lau Wai-hing said, “I am deeply sorry and feel sympathy for the disaster … but the mainland lacks a system rather than money. I do not wish to see the money fall into the pockets of corrupt officials,” according to the Post. The Civic Party considers the donation would be better given to a charity, and only the political party Democratic Alliance for the Betterment and Progress of Hong Kong said it would support the donation, provided its use is strictly monitored.

A Hong Kong netizen commented about the corruption in communist officialdom below the poll: “We trusted them to spend the donation wisely five years ago, but they betrayed our trust. So absolutely no money for them this time. Why don’t we donate food from our food banks instead?”

Another said: “Your donations to China would very likely become luxury watches for CCP leaders, gratuity to CCP prostitutes, shopping trips to Hong Kong and Macau, expensive cars for CCP leaders, military funding for oppressing the masses, bullets aimed at their heads, fifty-cent payments for the 50 Cent Party, extravagant estates for bureaucrats, jailing costs for prisoners of conscience, expenses for silencing victims and their families, wages for city enforcers, or local CCP faction expenditures.”