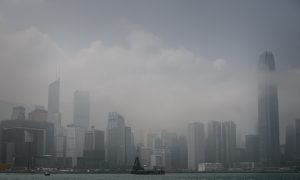 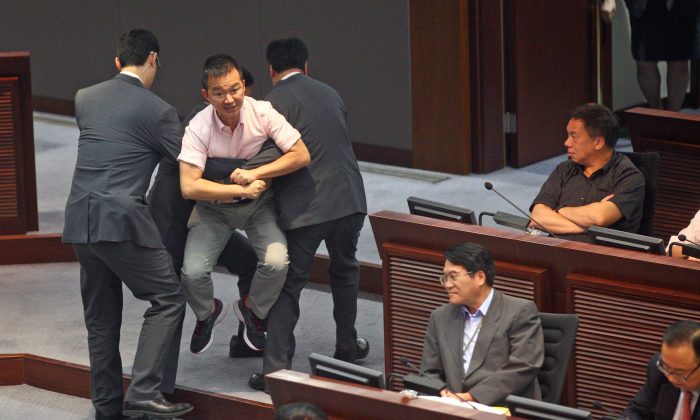 LegCo member Raymond Chan Chi-chuen is carried out by security guards after protesting the government reports that he feels do not honestly reflect Hong Kong citizens’ demand for civic nomination on July 15, 2014. (Epoch Times)
China

HONG KONG—Hong Kong Chief Executive Leung Chun-ying released a report on July 15 concerning whether or not Hong Kong people should have universal suffrage in upcoming elections.

Leung stated in the report that the method for selecting the Chief Executive (CE) in 2017 should be universal suffrage, but there is no need to change the method for forming the next Legislative Council (LegCo) in 2016. He also stated that CE candidates should be nominated by the Nominating Committee (NC) alone.

The report displeased Hong Kong Labor Party and Civic Party lawmakers, who believe it stretched the truth about public opinion to the breaking point.

The report stated, “The mainstream opinion is that Article 45 of the Basic Law has already made clear that the power to nominate CE candidates is vested in the NC only.”

“The community generally agrees that the CE should be a person who ‘loves the Country [of China] and loves Hong Kong,'” the report added.

Civic Party lawmaker Leong Kah-kit said the standpoint of the entire report was to comply with the government, and it couldn’t truthfully reflect Hong Kong people’s views.

“Hong Kongers have the consensus to be the boss of Hong Kong through true universal suffrage with no screening, and they must have the right to elect the CE, but this is nowhere to be found in the report,” Leong said.

Leung turned in the report to China’s National People’s Congress (NPC) Standing Committee on July 15. On the same day, a consultation report was released by the Task Force on Constitutional Development headed by Chief Secretary Carrie Lam Cheung Yuet-Ngor.

Lam explained the two reports to the LegCo lawmakers. The 93-page public consultation report covered the consultation materials of a five-month period, during which the government received 124,700 written submissions, Lam said.

Leung stated in his report that some organizations and individuals had proposed introducing civic nomination or party nomination for the CE. However, he also mentioned that some citizens and professional legal bodies believed that civic nomination was not in compliance with the Basic Law.

“At the same time, there are considerable views that the number of seats of the NC could be suitably increased pro rata across the four sectors to accommodate new subsectors or to enhance the representativeness of existing subsectors,” the report stated. “However, there are also quite a number of views that the NC should be of the same size as the current EC, i.e., 1,200 members; and that if there is a need to increase its size, the total number of members should not exceed 1,600.”

Leong Kah-kit said the idea of the NC being composed of four equally-proportioned sectors was deceiving Hong Kongers and was even worse than an election by a small circle.

During a question and answer session, lawmakers from both the pro-Beijing and pan-democratic camps asked Lam for the government’s opinion on civic nomination. Lam said the report summarized the views and opinions with facts, and the government would not deny or suggest any proposal at present.

Leung’s report did not mention the recent civil referendum that collected nearly 800,000 votes for democracy in Hong Kong. Nor did it speak of the annual July 1 protest that was attended by 510,000 people this year.

When asked why, Lam said these things happened after the report was written.

Since the consultation on political reform was launched, pan-democrats have fought for true universal suffrage through a hunger strike and walking campaign. These appeals were also not reflected in the consultation report.

Labor Party lawmaker Cyd Ho Sau-lan asked whether the authorities were the enemies of the people and whether the government is truly willing to listen to all views as it claims.

“You could reach consensus by suppression, but this is absolutely wrong,” Ho warned the government. “We are not afraid to use civil disobedience.”

She also mentioned the Alliance for True Democracy’s election plan, which includes three channels for nomination: civil nomination, political party nomination, and nomination by the NC. Ho said this is already a compromise by the pan-democrats of their goal of genuine universal suffrage.

Labor Party leader Lee Cheuk-yan said that the Hong Kong Special Administrative Region (SAR) government had made no progress on the method of forming the LegCo. Lee said that when Leung’s report said the method would not be amended, this meant that even the universal suffrage in the 2017 election was not true universal suffrage.

However, Lee thinks there is still room to negotiate for universal suffrage, and he called on citizens to keep fighting.

“The door isn’t closed yet, and we don’t know if the NPC will shut the door on true universal suffrage. We think gaining strength from the people is very useful and powerful.”

Lawmaker Leung Kwok-hung said Lam didn’t reflect people’s demands for civil nomination. He said that under the current circumstances, the only way to proceed is to use civil disobedience, including the Occupy Central movement that plans to protest for universal suffrage in July.

Leung Kwok-hung also suggested a repeat of the Hong Kong by-election in 2010, in which five pan-democratic LegCo members from five districts resigned in order to force a by-election by the citizens.

“If the NPC neglects the demands of Hong Kong people, the Five Constituencies Referendum and Occupy Central should be prepared and launched right away,” he said.

He said that civil disobedience does not only include Occupy Central, but also a series of confrontations in every aspect, such as withdrawing all the money from China-owned banks, going on strike, or closing up all the shops. People from all walks of life could confront by different means, and it doesn’t mean they have to do anything illegal, Leung Kwok-hung said.