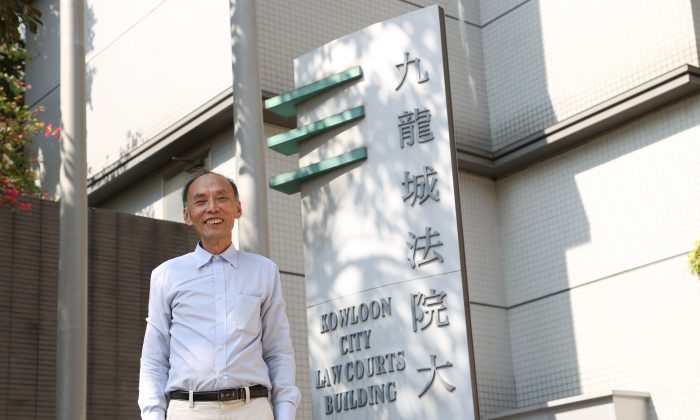 Cen Canming, a Falun Gong practitioner, smiled happily on Chinese New Year's eve after being found not guilty in a case brought against him by a member of the Hong Kong Youth Care Association. (Li Zhen/Epoch Times)
China

HONG KONG—Soon after the Hong Kong Youth Care Association began a campaign of harassment in June 2012 against Falun Gong practitioners, it has sought unsuccessfully to bring the authority of the Hong Kong courts against the Falun Gong. A court decision on Chinese New Year’s eve continued a string of defeats that the Youth Care Association has suffered in such legal actions.

On Sept. 8, the police claimed that they had obtained a photo from the association establishing that Cen had damaged the banner and sent over ten policemen to the pier to arrest the 66-year-old man. After his arrest, Cen was required to report to the police station each month.

On Chinese New Year’s Eve, a judge handed a ‘not guilty’ sentence to a falsely charged Falun Dong practitioner who was being charged of criminal destruction. The judge disdainfully denounces the deputy minister of HKYCA’s Publicity Dept. Zhang Liuqing’s testimony incoherent and the allegations incredible. This is the third time that HKYCA has attempted to bring falsified charges against Falun Gong practitioners.

The trial began on Jan. 29 in the Kowloon City Judgment Court. After a half-a-day-long hearing, the judge rendered a not guilty verdict on Jan. 30. In his decision, the judge stated that the testimony of Zhang was incoherent and not credible.

Cen was very happy with the result, as it freed him to enjoy a carefree Chinese New Year holiday. “Even the sky brightens up,” Cen said.

Cen said the importance of the verdict in his case was related to the ongoing efforts by the Chinese Communist Party (CCP) to suppress Falun Gong.

He listed three considerations. The not guilty verdict cleared the name of Falun Gong, let the people of Hong Kong know something about the facts regarding Falun Gong, and allowed people to see clearly that the real Hong Kong Youth Care Association is under the control of the CCP.

The CCP began persecuting Falun Gong in July 1999 out of fear of the popularity of the practice.

In August 2012 a reporter from Hong Kong’s Next Magazine discovered that the Hong Kong Youth Care Association shares staff and office space with the 610 Office in Shenzhen, just across the border from Hong Kong in mainland China. The 610 Office is the secretive CCP office established for the purpose of eradicating the practice of Falun Gong.

Cen began practicing Falun Gong in 2005. He had frequently participated in demonstrations in Hong Kong and had the opportunity to observe Falun Gong practitioners peaceful, rational behavior, which impressed him. After he began practicing Falun Gong, pain he had suffered since in 2000 disappeared within a month. Cen had suffered an industrial accident that caused multiple fractures and six different medical departments had tried and failed to relieve his chronic pain.

Zhang has twice previously brought criminal complaints against Falun Gong practitioners.
In December 2012 a practitioner was accused by Zhang of criminal damage, but found not guilty in May 2013.

In February 2013, a practitioner was accused by Zhang of beating people, but was found not guilty in November 2013.

In addition, in July 2012 the vice-president of the association accused a practitioner of wounding people, but the practitioner was found not guilty in December of that year.

Falun Gong practitioners have been successful in criminal complaints they have brought against Hong Kong Youth Care Association members.

On January 24, 2013, the female member of the Association was sentenced to one year in prison for beating practitioners.

On March 27, 2013 an Association member was sentenced to 18-months probation for beating a Falun Gong practitioner.

Cen said the court verdict in his case was good because it gave the people of Hong Kong an opportunity to stand on the side of justice and support Falun Gong.