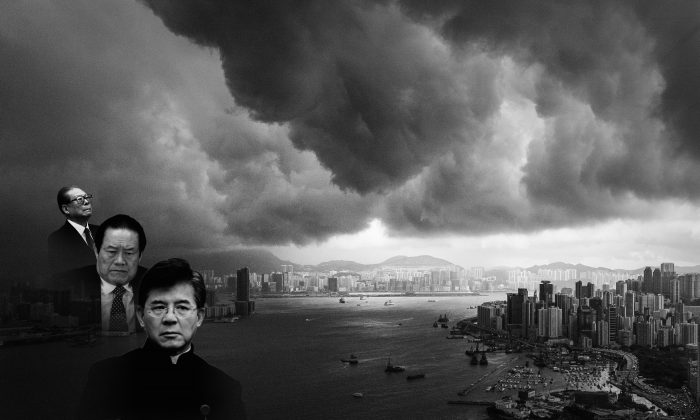 Epoch Times composition photo of former Party leader Jiang Zemin and two supporters. In the foreground from L to R: Jiang, Zhou Yongkang, and Lo Hong-Shui. In the background, clouds build up over the Victoria harbor before a storm in Hong Kong on April 30, 2013. (Philippe Lopez/AFP/Getty Images)
China

HONG KONG—Yet another close supporter of former Chinese Communist Party leader Jiang Zemin has been put in the hot seat during the anti-corruption campaign that has purged droves of Jiang’s allies from the Party.

Vincent Lo Hong-shui, chairman of the Hong Kong-based Shui On Group, has close ties with Jiang and many members of Jiang’s faction. Lo’s company was sued in the Hong Kong High Court on August 12 by Hu Dehua, who supports current Party leader Xi Jinping and opposes Jiang.

Hu, the son of former reformist Party leader Hu Yaobang, is the owner of Beijing Jingda Property Development Ltd. It is alleged that after he refused to sell his company to Lo five years ago, over 200 thugs occupied a Beijing Jingda development project for two months using violence and threats.

The thugs were suspected to have been hired by Lo’s company SOCAM Development Ltd., a member of the Shui On Group. SOCAM is also suspected of stealing over 200 important documents from Beijing Jingda.

The current lawsuit requires SOCAM Development Ltd. to return the stolen documents and compensate for the losses.

Hu could not take legal action until now due to Lo’s connections with powerful officials, according to Hu’s legal representative Wang Xiaopei.

Hu complained about Lo twice to Politburo Standing Committee member Yu Zhengsheng during the Party’s two sessions in 2013, but the issue was never resolved. The two sessions refers to the annual meetings of the National People’s Congress and the People’s Political Consultative Conference, which are held in succession.

“He was just an owner of houses, yet he was able to hire over 200 people to occupy that zone,” Wang said. “This would not happen in any society ruled by law. I think he is simply a mafia leader, a thug.”

Now that Zhou is under investigation in the anti-corruption campaign headed by Xi, Wang hopes the judicial system can bring justice.

“Nobody cared before, but now Zhou’s legal and security system has collapsed, so the judicial environment should be better,” Wang said.

Wang said they brought Lo to court in Hong Kong only because there was nowhere to seek justice in China. He said that even after five years, there has been no further investigation into the case.

Wang added that the defending party is using delay tactics and will not admit to stealing the documents. Without the documents, Wang said the company is literally impossible to run.

According to Wang, when they first reported the criminals to the local police station, the police authorities said they would not deal with economic disputes.

Lo, 66, started his real estate kingdom in Shanghai in 1984. His Hong Kong-based Shui On Group was among the few Hong Kong companies that invested in China early on.

With his close relationship with the Shanghai-based Jiang faction, Lo is considered the bridge between the political and business quarters of Shanghai and Hong Kong, earning him the nickname “Shanghai’s godson.”

It has been said that Lo’s ability to acquire property is unmatched by many other developers, including Asia’s richest man Li Ka-shing.

Xintiandi is an affluent shopping and entertainment district located near the Party’s first National People’s Congress venue. Lo set the date of its completion to June 30, 2001, one day before the Party’s 80th anniversary.

The Xintiandi project relocated 3800 households in 43 days in order to widen the roads. Lo reported that Jiang attended the completion and praised Xintiandi as a brilliant conception.

Lo has duplicated the Xintiandi pattern in Chongqing, Wuhan, and other cities in China. For instance, in 2008 Chongqing Party chief Bo Xilai praised Lo for his property development in Chongqing.

According to Zheng, one of Shui On’s developments was located in a lot that used to be the airport of the 4th air force troops.

“The 4th air force troops belong to the Central Military Commission, of which Jiang Zemin was the chairman at the time. His son Jiang Mianheng was the deputy head of the Manned Space Program. Without their approval, who could acquire the lot? It involved huge corruption,” Zheng said.

Lo was also involved in the 2006 Shanghai pension scandal, in which Shanghai’s social security fund was illegally invested in real estate and other projects. The Shui On Group’s Innovation Community Project issued a statement admitting that their project had obtained such a loan and would return the remaining money as soon as possible.

Lo is a close friend and strong financial supporter of Hong Kong Chief Executive Leung Chun-ying, another representative of the Jiang faction in Hong Kong.

Lo is a member of the national committee of the Chinese People’s Political Consultative Conference (CPPCC), vice chairman of The National Federation of Industry and Commerce, and many other positions. When Leung announced he was running for Chief Executive, Lo was the first estate tycoon to support him.

Lo said he and Leung had been friends for over 30 years. Lo and Leung met in 1985 when they were both appointed to join the Basic Law Consultative Committee, and Leung was once the Non-Executive Director of the Shui On Group.

“As the investigation continues on Lo’s case, Leung Chun-ying will be implicated without any doubt,” Zheng said.

Zheng said that according to some analyses, Hu Dehua’s political intention is clear, as he is an old family friend of Xi Jinping attacking an ally of Jiang. Zheng believes the current lawsuit against Lo is a sign of Xi’s determination to continuously purge the Jiang faction.