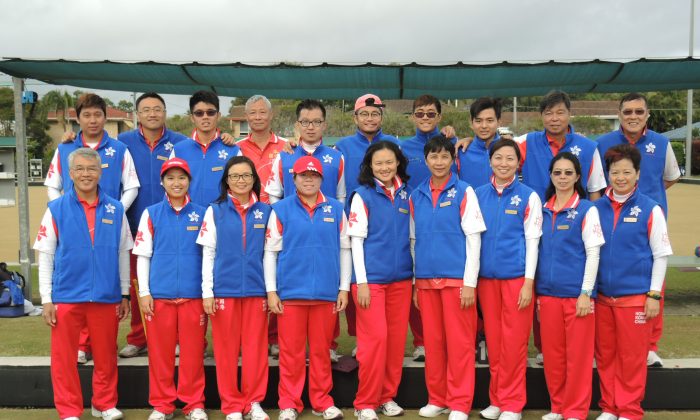 Australian Open Squad 2015: Combining the experience of some senior bowlers and a number of debutants, a new look Hong Kong team registered encouraging results at the Australian Open. The best result was recorded in the women’s Fours when the team entered the quarter-finals. In singles both Ken Chan and Phyllis Wong finished in the last 32. (Walter Kwok)
HK Lawn Bowls

Top Hong Kong bowler Ken Chan ended his dream journey in the run for top glory in men’s singles in the Australian Open 2015 at Gold Coast.

Chan’s latest win on Tuesday morning, June 23, at Helensvale sent him to the round of final 32 to take on Ryan Bester, powerful Canadian International now based at Broadbeach, Gold Coast. Bester proved too strong for Chan who could only manage to score in 4 of the 22 ends played.

Another brilliant achievement came in the women’s singles. Hong Kong squad debutant Phyllis Wong bowed out of her singles expedition with 5 wins, two of which in the elimination round held at the same venue including defeating former Australian Commonwealth Games representative Maria Rigby. Similar to Chan, Wong finished a top 32.

The quartet had an unblemished record in the sectional held last Thursday. They then went on to beat two local teams including the team comprising Emma Brown and Noelene Dutton, the defending pairs champion, to gain a berth in the quarter-finals at Helensvale, where they fought an uphill battle against the defending champion contingent of Anne Johns, Rebecca Van Asch, Lynsey Clarke and Ellen Ryan replacing Carla Odgers. They eventually bowed out at 8-18.

This was the second year in a roll the HK Lawn Bowls Association participated in the Australian Open.

“This might be one of the richest bowls tournaments in the world, but we are not after the prizes,” says Heron Lau, the association official behind the project.

“Overseas training is much needed and we are seeing the fruition coming to hand nicely. To win any prize is bonus and a confidence boost for our players. They will come of the tournament much better bowlers and a formidable force for HK in the international stage for years to come,” added Lau.

Team coach and High Performance Manager of the association Danny Ho echoes the importance of the Gold Coast journey.

“Ken, Phyllis and the girls in the fours and in fact all our qualifiers had to be commended. They acclimatized well to the new environment,” says Ho.

“However, our prime objective here is to train. To expose our players to the fast paced greens in preparation for the upcoming Asia Pacific Championship at Christchurch, New Zealand next November. All our players will benefit from the experience. In fact, the chance for our new recruits to play against some big names such as Terry Kung in the pairs against three-time world indoor champion Jeremy Henry will help fast-track them to maturity. A prime example being U25 squad Amy Choi,” added Ho.

Choi was part of the women’s fours team which made the quarter-finals.

“Last time Amy was here at the AO, we were still touching up on her delivery routines. One year later she is a very useful lead and an outright qualifier in singles,” says Ho.

“Amy played a most creditable defeat against Australian national team captain Lynsey Clarke in the qualifying. In her first knock-out match she beat Western Australia state coach Therese Hastings. It is a very pleasant surprise.”

Apart from the tournament, two full days of test matches against the Australian national and Queensland state teams were arranged at Tugun with the support of Bowls Australia.

“The test matches are an invaluable element to the experience, so that we particularly younger members of our team know the kind of oppositions we are facing in world events,” says Ken Chan. “There is no substitute to experience. It’s what made me a competitive player like I am now.”

Hong Kong Lawn Bowls Finals Day
A number of national titles will be decided at the Finals Day this Sunday June 28 at the Craigengower Cricket Club.

This is the first of the two Finals Days organized by the Hong Kong Lawn Bowls Association this year, which group together the finals of all major lawn bowls competitions in one venue to attract more spectators.

The morning session starts at 10:30 am when the finals of men and women’s National Pairs and Novice Singles will be played.

The 2:30 afternoon matches include the men and women National Fours and a Mixed Triples.

Walter Kwok is an officer of the Hong Kong Lawn Bowls Association.