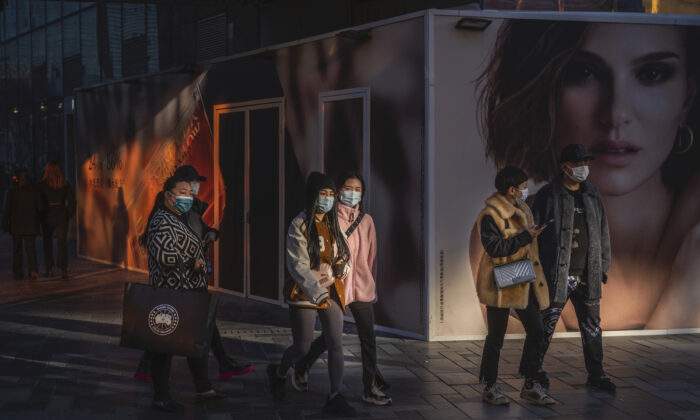 People wear protective masks as they walk by an ad for French luxury fashion brand DIOR outside a new location set to open at a shopping area in Beijing, China, on Nov. 24, 2021. (Kevin Frayer/Getty Images)
Chinese Regime

The Chinese communist regime has recently put out regulations that require acting agents—including those from Taiwan, Macau, and Hong Kong working in China—to be certified in mainland China. The agents, as well as the actors they represent, must swear allegiance to the Chinese Communist Party (CCP)’s constitution. Taiwanese lawmakers warn that the artists may be punished in the mainland for their speeches.

The Chinese regime put out the revised “Administrative Measures for Acting Agents” on Dec. 24, stipulating that agents must pass a qualification examination starting from March 2022. They must support the CCP’s constitution and have so-called “good political quality.”

Taiwanese legislator Rosalia Wu said that the absurd new regulation is another form of censorship, thereby suppressing the freedom of thought and creation.

Architects, lawyers, physicians, and others need to be tested for certification, which is to certify whether their professional ability meets the standard. However, in China, actors also need to show support for CCP’s unified thinking, Wu said.

“This is unacceptable in a democratic society, because it violates freedom and human rights, and is against universal values,” Wu told The Epoch Times.

She was also concerned that the CCP’s purge will be extended to other industries, and urged Taiwanese to carefully consider whether they want to develop businesses in mainland China.

Lai Chung-chiang, who chairs the Economic Democracy Union, said in an interview with The Epoch Times that the CCP’s approach is to “legalize” the united front targeting Taiwanese artists. The CCP requires that Taiwanese artists working in China must stand for the so-called “one-China principle, unification,” and “support the Communist Party.” “In fact, this has always been the case in the past. The agent management method set this time is to control the artists by controlling their agents,” he said.

Taiwanese lawmaker Tsai Shih-ying pointed out that Taiwan has never asked nationals from mainland China who participate in Taiwanese film production to abide by Taiwan’s constitution.

“Because we think this is the freedom of performing arts and creation, and it is also people’s freedom of speech. This is the most significant difference between Taiwan and communist China,” Tsai told The Epoch Times.

Taipei City Councillor Miao Po-ya called on Taiwan’s central and local authorities to send a clearer message to remind artists in film, television, and audio of the political risks in the mainland market, and they should gradually guide the artists to develop in the international market outside of China.

Zhong Yuan and Zhang Dongxu contributed to the report.