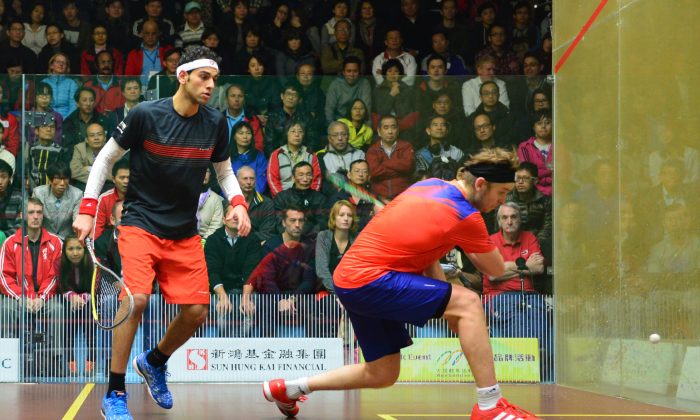 James Willstrop Seeded No. 3 of England (on strike) seen here playing Mohamed Elshorbagy of Egypt in the Quarter Final of the Hong Kong Squash Open 2013 is an early casualty in this year's event losing in the first round to Tarek Momen of Egypt.. Elshorbagy is seeded-2 in this year’s tournament. (Eddie So)
Hong Kong

The Cathay Pacific Sun Hung Kai Financial Hong Kong Squash Open 2014 started last Sunday Aug 24 with two days of qualifying rounds. The first round of the main draw are played on Tuesday Aug 26 and Wednesday Aug 27 and the second round of the competition is will take place on Thursday Aug 28. The tournament finishes on Sunday Aug 31.

As usual this premier world event has attracted many of the world’s top players, but there are notable absentees in both the Men’s and Women’s events this year. For the men, Nick Matthew of England (ranked 2), Ramy Ashour (4) and Amir Shabana (5) of Egypt are missing. To open the men’s draw up further James Willstrop seeded 3 lost in the first round to Tarek Momen of Egypt.

The Malaysian Open played last week has taken its toll on the women’s competition with 5-players withdrawing during the last 7-days, these include: Joelle King of New Zealand (4), Nour El Shabini of Egypt (8), Dipika Pallikal of India (10), Madeline Perry of Ireland (11) and Donna Urquhart of Australia (22). This required quite a major reshuffle of the draw.

Even with these omissions 7 of the top 10 ranked players are involved in both the men’s and women’s competition. Max Lee is Hong Kong’s only player to make the main draw and for the women Annie Au, Joey Chan and Tong Tsz Wing are the players to watch.