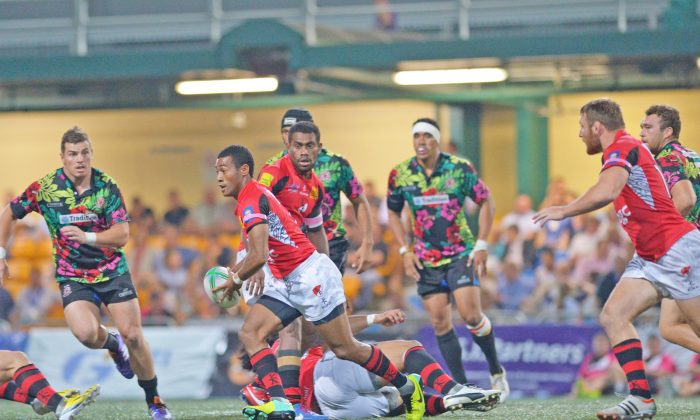 BGC Dragons on the attack during their win against Tradition YCAC in the final of the Hong Kong Tens 2014. (Bill Cox/Epoch Times)
HK Rugby Union

HONG KONG—In the build-up to Hong Kong Rugby Sevens 2015 to be held on March 27-29 there will be much activity for the sports fans, including opportunities for general public participation.

Some of the events lined up include a light show of Rugby Sevens graphics on the International Commerce Centre (ICC), the annual Repulse Bay Beach 5’s, the Kowloon Rugby Fest, the Hong Kong Tens and the Cathay Pacific/HSBC Women’s Rugby Sevens.

ICC Light Show
The ICC Light Show to celebrate the Hong Kong Rugby Sevens’ 40th anniversary will be on display from tomorrow (March 20) through to March 29 depicting Hong Kong Rugby Sevens scenes. Two 15 minute shows will take place each day at 7:45pm and 9:00pm. Good viewing areas to see the display are Victoria Harbour waterfront, at Central and from the Podium restaurants overlooking the Victoria Harbour on 3rd and 4th Floors of International Finance Centre (IFC).

Beach 5’s
This annual fun event at Repulse Bay Beach now in its 5th year will be held on March 21-22 between 9:00am and 7:00pm. In just 5-years it has developed from just a Beach 5’s Rugby competition to include Beach Netball, Dodgeball, Football and a Fitness Zone. Who knows what might be added this year! More details see www.beach5s.com

GFI Hong Kong Tens
Fast becoming a major international Rugby event, this popular 2-day tournament claimed by the organisers to be the Premier Ten’s Tournament in the world, will take place at the Hong Kong Football Club on March 25-26. This high quality ‘social rugby’ tournament attracts many of the past, present and future international stars of Rugby Union. It will again feature such teams as the BGC Dragons (last year’s winners), runners-up Tradition YCAC, Penguins, Samurai International, Irish Vikings and the French Rugby Academy amongst the 16 teams in the competition. More at www.hongkongtens.com

Cathay Pacific/HSBC Women’s Rugby Sevens
This is the start of the Hong Kong Sevens, the Pool matches in the women’s event will be played at King’s Park Rugby Ground on Thursday March 26. The women’s competition will then move to Hong Kong Football Club for the knock out stages on Friday March 27. However, the Final will be played at the main Rugby Sevens Stadium on Friday March 27 with a start time of 17:24. Other events taking place at HKFC making a full day of rugby will be a Bali Memorial match and U14 and U12 Youth Exhibition Matches.

The Sevens Itself
Stadium gates open at 11:00 on Friday March 27 for the Cathay Pacific/HSBC Rugby Sevens with a 2-hour mini/youth Showcase. Qualifier Competition round-robin matches start at 1:00pm and continue until just before the start of the Women’s Seven’s Final at 5:27. Main competition matches commence at 6:10pm and continue until 9:00pm. The tournament continues on Saturday (March 28) and Sunday (March 29) with the Finals taking place late on Sunday afternoon/evening.

The winners of the men’s International Team Qualifier competition will gain a place as a core team in the HSBC Rugby World Series 2015-2016. The Hong Kong team is featured in this strong qualifier competition together with Canada, Argentina, China, Japan, Netherlands, Samoa, Kazakhstan, Papua New Guinea, Tunisia, Mexico and Singapore.

Hong Kong (men) will face China, Kazakhstan and Singapore in Pool ‘B’ of the initial round-robin matches. All games of the Qualifier Competition will be played at the Hong Kong Stadium as part of the Hong Kong Sevens program. Hong Kong’s first match (against Brazil) will commence at 2:50pm on Friday March 27.