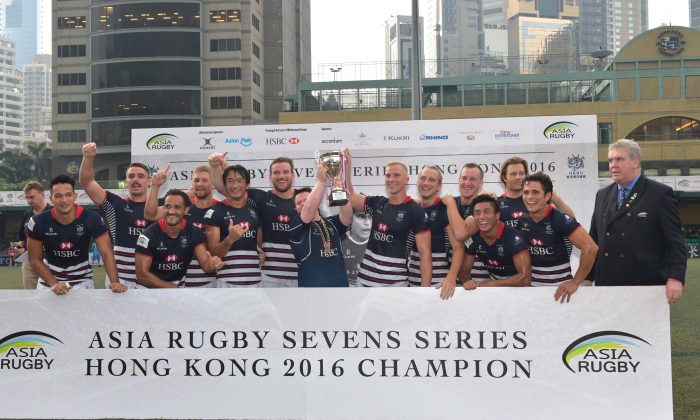 Hong Kong played host to the 1st leg (of 3) of the Asia Rugby Sevens Series for 2016, at the Hong Kong Football Club on Friday Sept 2 and Saturday Sept 3.

In the final of the Men’s competition, Hong Kong outlasted Sri Lanka to win 22-17, to edge a close final. The two teams had met the previous day, with Hong Kong resoundingly beating Sri Lanka, 22-0. Sevens is a fickle game, and a day a long time in Seven’s rugby. Sri Lanka proved dangerous opponents in the final, and came very close to spoiling Hong Kong’s party. They had earlier beaten China in the semi-final, 19-17, with a last ditch try; Hong Kong had an easier passage beating South Korea 28-14.

In the final despite dominating early possession, Hong Kong went behind, 0-7, to a breakaway try from Sri Lanka, who were clearly going to make their fleet-footed pace work for them. As the half wore on, Hong Kong’s strength at the breakdown and control of possession gave them the opportunity to work their way back into the game, and by half time led 12-7.

From the restart of the 2nd half, Sri Lanka again left Hong Kong floundering for pace, first drawing level at 12-12, then taking a deserved lead, 12-17. To win at this level often takes more than pace and enthusiasm. Hong Kong intelligently marshalled by Ben Rimene, (deservedly named player of the tournament), retained possession and once close to the Sri Lankan try-line barreled over for the try, to briefly level the score at 17-17, before Rimene added the extra 2 points to give Hong Kong a 19-17 lead with 90 seconds to go. A final penalty drop goal by Rimene on the stroke of time, gave Hong Kong a narrow victory 22-17.

Over the two days, Hong Kong looked the class side of the tournament; solid defensively, competitive at the breakdown, good ball skills and a depth of talent in the squad. The only weakness is lack of real pace, which was exposed by Sri Lanka. It is a satisfying start to the Sevens season for Hong Kong, despite not qualifying for Rio, the team look well-honed by the Olympic qualifying experience and the playing of quality opposition.

Japan won the Women’s tournament, edging China 14-7 in the final. Two tries in the last two minutes secured victory. China had taken the lead early in the second half, but could not hold-off the tenacious pressure from the Japanese women. In the 3rd/4th play-off, Hong Kong saved their best for last beating Thailand 36-7. A disappointing weekend for Hong Kong. They had hoped to perform better, and were woefully exposed by Japan (0-38) on Friday and China (7-19) in the semi-final on Saturday. They will need to be more competitive in the coming tournaments.

The next tournament is in South Korea on Sept 24-25 and the final round in Sri Lanka Oct 15-16. At future tournaments, more effort should be put into marketing the event: spectators were outnumbered by administrators and teams. The recent magic of Sevens at Rio, was not translated into the spirit of this event. A missed opportunity.