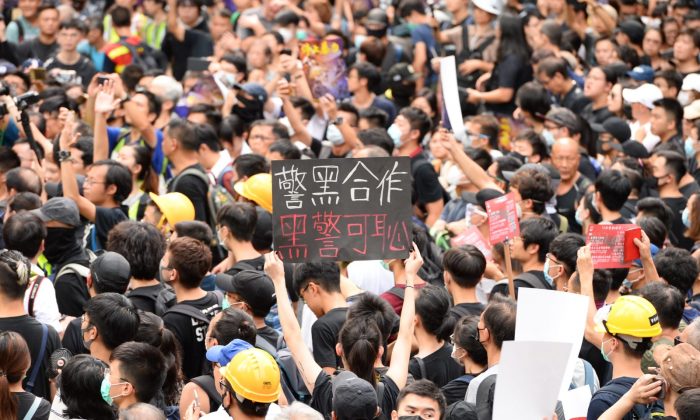 Amid the ongoing protests in Hong Kong, public servants from various government agencies are in the process of organizing a rally to call on government leaders to listen to the people.

As public servants in Hong Kong are required to remain neutral, this group of government workers has never spoken out before about the government’s handling of political and social issues. The rally, with the theme “Public servants are with the people,” is therefore an unprecedented event in Hong Kong’s history. It is scheduled to take place on Aug. 5.

The mass demonstrations began in early June when the Hong Kong government introduced a controversial extradition bill that would allow criminal suspects or fugitives to be extradited to mainland China. In addition to demanding the complete withdrawal of the bill, more and more Hongkongers condemn the government for excessive force used by police against the protesters. They also condemn Hong Kong’s Chief Executive Carrie Lam for refusing to address protesters’ demands after weeks of mass campaigns.

“As public servants, our duty is to serve the Hong Kong people, protect Hong Kong’s core values and improve the people’s well being,” Hong Kong public servants wrote in their press release. “Although we are required to be politically neutral when we are on duty, it does not mean we must remain silent on political topics, because when we take off our uniforms, we are also citizens of Hong Kong.”

Ngan Mo-chow, a public servant at the Labor Department and an organizer of the rally, told the media on July 29 that the event is a spontaneous civil action. Similar to the ongoing mass protests, there is no leader, and it does not represent the opinion of any department of the government.

Ngan said the participants intended to rally peacefully and to urge Chief Executive Carrie Lam to respond to the five demands made by the protesters: to fully withdraw the extradition bill; launch an independent investigation into the use of force by police; retract the “riot” classification of the June 12 protest; drop the charges against all those arrested during the protests, and enact universal suffrage for city elections.

One week ago, public servants from at least 23 departments of the Hong Kong government also drafted letters condemning Hong Kong leaders’ handling of the recent protests.

In an anonymous petition on July 26, over 100 Hongkongers who hold administrative officer positions at government agencies expressed their disappointment over the “dereliction of duty” and “blatant failure” of the government under Lam. They said that their duty as public servants compelled them to speak out.

“This summer in Hong Kong … is a cardinal moment where we stand at a crossroads of right and wrong, and we cannot remain silent,” the petitioners wrote.

The announced rally, expected to be 2,000 strong, is scheduled to take place on Aug. 5 from 7 to 9 p.m. at Chater Garden in the Central District of Hong Kong. The organizers submitted an application for the no-objection notice at Central Police District Headquarters on July 29.