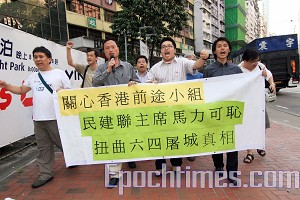 On the 16th, a group of democrats paraded to DAB office to protest against DAB Chairman Ma Lik's comments about the June 4 Massacre in 1989 (The Epoch Times/ Wu Lianyu)
China

At the time approaching the eighteenth anniversary of the June 4 Massacre, pro-communist alliance leader Ma Lik made a public statement denying there was a massacre on Tiananmen Square on June 4, 1989. His statement triggered severe criticism by the public.

Ma Lik is the Chairman of Democratic Alliance for the Betterment and Progress of Hong Kong (DAB). Last Tuesday at a press release, he made comments about his view on the June 4 student movement in 1989 and denied that it was a massacre. He denied the fact that bodies were burned on Tiananmen Square and also denied that tanks ran over and killed Chinese citizens. He also requested the Hong Kong Education Bureau to make this view [that June 4 was not a massacre] official.

Civil Human Rights Front published a statement requesting Ma Lik to apologize publicly for his comments. The statements stated, “Since Hong Kong was returned to China ten years ago, the Hong Kong government has continued to hard sell “patriotic education” to the public and tried to cover up the mistakes made by the Chinese government in the past. This type of education is brainwashing. Ma Lik's comments further rationalized such incorrect education, covering up the truth with lies.”

Southern Democratic Alliance, China Democratic Party Hong Kong Branch and other democratic activists published a joint statement condemning Ma Lik's comments, requesting him to apologize and resign. The statement stated, “We truly believe that the autocratic and violent nature of the communism was the cause of the June 4 Massacre. We hereby call for the Chinese Communist Party (CCP) leaders to give up communism, return peace and freedom to the Chinese people.”

Mr. Szeto Wah, Chairman of the Hong Kong Alliance in Support of Patriotic Democratic Movements of China (the Hong Kong Alliance) said Ma Lik's comments are shameless. Mr. Szeto said, “This is another form of murder of the victim's spirits. To the family members of the victims, it is like rubbing salt on their wounds. It is an insult to the people around the world with conscience. Therefore I call this shameless.”

In Hong Kong, tens of thousands of people voluntarily organize activities for the June 4 anniversary every year in memory of the victims. Mr. Szeto questioned the purpose of Ma Lik's statement at the time of the eighteenth anniversary of the June 4 Massacre. Ma Lik's comments aim to distort history and promote the CCP.

After the incident, Ma Lik admitted that his words might be too hasty and frivolous but he refused to admit his view was incorrect. The Hong Kong Alliance plans to protest at the DAB headquarters on Friday afternoon where they will request to have a public debate with Ma Lik.