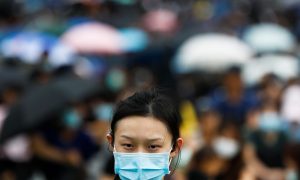 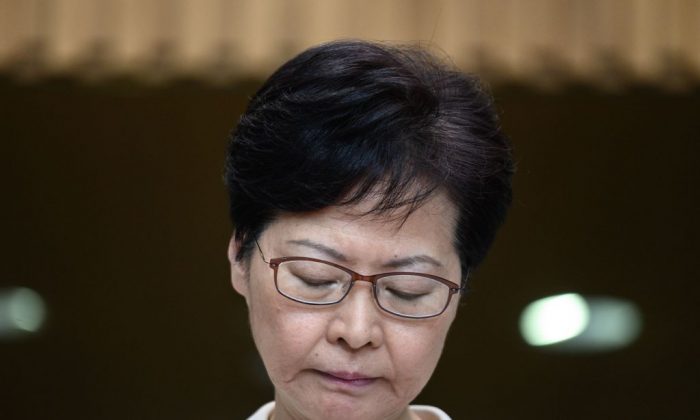 On Sept. 5, Lam held a press conference where she reaffirmed her decision to withdraw the bill, which was announced via a pre-recorded television address a day earlier.

Lam stated again that the bill will be withdrawn to allay public concerns and that her secretary of security will start the withdrawal proceedings when the city’s legislature (LegCo) convenes next month.

When asked by a reporter what had changed her mind after three months, Lam responded by saying, “It is not exactly correct to describe this as a change of mind.”

Millions of Hongkongers have been taking to the streets since June 9 to call for the government to withdraw the bill that many feared would erode the city’s autonomy, as persons in the city could be handed over to China to be put on trial in courts controlled by the Chinese Communist Party (CCP), which are notorious for being abused to silence critics and punish dissidents.

This is art. A picture on a whiteboard in the dorm in The Chinese University of HK. #CarrieLam said she wants to listen to the public, plz go to universities in HK. #HongKongProtests #antiELAB #5DemandsNotOneLess #FollowBackHongKong pic.twitter.com/v68dqhA8Cb

Lam elaborated that she had suspended the bill on June 15 and made clear that the bill was “dead” in July.

“So as far as the substance is concerned, there is simply no plan to take forward the bill in light of the controversy,” she concluded.

Some facts you have to know about latest Hong Kong protest development.#antiELABhk pic.twitter.com/wX0ggvGMHy

Civic Party, in a Facebook post after Lam’s press conference, accused Lam of trying to fool Hongkongers because of her apparent remark on how there was no difference between suspension and withdrawal.

Lam had announced the bill’s suspension following massive protests when over a million took to the streets in early June. Then, on July 9, Lam called a press conference during which she said the bill was effectively “dead”—a choice of words that has since drawn strong criticism because it left the possibility that the bill could have been put back on the legislative agenda.

At the time, U.S. Senator Pat Toomey (R-Pa.) issued a warning about the “dead” bill, saying that since it had not been withdrawn, the threat remained.

The protests in Hong Kong have now entered their fourth month.

On Sept. 5, Lam refused to fulfill any more of the protesters’ key demands, including the demand for an independent commission to investigate instances of alleged police violence. Instead, Lam said she supported the police’s internal watchdog, the Independent Police Complaints Council (IPCC), to carry out a fact-finding studying over complaints against the police.

Protesters have questioned the IPCC’s ability to conduct impartial investigations of complaints against the police force—a concern that the UN Human Rights Commission had raised in a 2013 report. The UN commission had recommended that Hong Kong “establish a fully independent mechanism,” given that the IPCC “has only advisory and oversight functions.”

Lam again emphasized that her proposed platform for dialogue was the way to move forward to resolve the current crisis, and explained that her decision to withdraw the bill was to provide “the basis” for dialogue going forward.

She also shot down the protesters’ demand for amnesty for all arrested protesters, saying that such a move would be against the city’s rule of law.

When asked why she did not appoint any pro-democracy members to the IPCC, Lam said she couldn’t disclose the appointment procedure.

On Sept. 4, Lam announced that she had added two new members to the IPCC. But her selections were quickly questioned by Civic Party lawmaker Jeremy Tam. Tam pointed out in a Facebook post that both of Lam’s appointed members are from the pro-establishment camp.

Wu Chi-wai, chairman of the Democratic Party, said that Lam had already “missed her best chance” to withdraw the bill, and if she continued to evade the remaining demands, she will only extend the current conflict. Additionally, Wu said Lam’s government has turned a blind eye to protesters injured in clashes with police, including the female volunteer medic who lost eyesight in one eye after being hit with a bean bag round on Aug. 11.

Pro-democracy camp convener Claudia Mo criticized Lam for being a “broken tape recorder” for failing to apologize to society and address differences in public opinion.

Speaking at another press conference on Sept. 5, Tsuen Wan District Councillor Roy Tam stated that he was in support of the U.S. Congress quickly passing the Hong Kong Human Rights and Democracy Act 2019.

The bill, which was introduced in both the House and Senate in June, proposes making Hong Kong’s special trading status contingent on the annual certification of Hong Kong’s autonomy by the U.S. Secretary of State.

According to Hong Kong media Oriental Daily, many protests are being planned in the upcoming week, including another “stress test” at the Hong Kong airport on Sept. 7, and a rally the following day to petition for the passing of the U.S. bill.