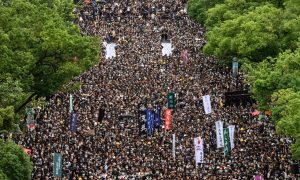 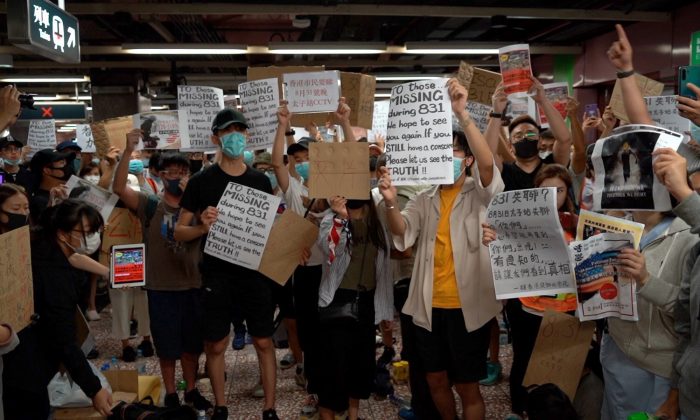 Protesters at a sit-in inside the Prince Edward metro station to demand full unedited CCTV footage of when police stormed into the station and attacked citizens last weekend, in Hong Kong on Sept. 6, 2019. (Shenghua Sung/NTD News)
HK Current Affairs

HONG KONG—Citizens continue to protest after Hong Kong leader Carrie Lam announced earlier in the week that a controversial extradition bill would be formally withdrawn.

Protesters gathered outside the Prince Edward metro station on Sept. 6 amid growing concerns that people went missing after police stormed inside the station last weekend and indiscriminately beat and subdued passengers whom they suspected of being protesters who committed offenses.

The extradition bill that sparked the city’s largest protest movement proposed allowing individuals to be sent to mainland China for trial. It drew widespread opposition amid fears that the law would be abused by the Chinese communist regime to silence and punish dissidents or critics.

Although Lam announced the bill’s formal withdrawal via a televised address on Sept. 4, protesters said the concession was too little, too late and want all of their other demands to be answered.

Since June, protesters have also called for an independent inquiry into police actions; the government to retract its previous characterizations of protesters as rioters; amnesty for those arrested during protests; and free democratic elections.

Protesters held their tenth press conference on Friday, in which they called for the international community to continue supporting them, even though one of their key demands were fulfilled.

“A lot of international friends congratulate us, they think that we’ve finally won the victory that we want,” Ng told The Epoch Times. “But actually, this is not the case, by far it’s not the case.” Ng identified himself only by his last name and covered his face—like many protesters—due to concerns of reprisal from the Hong Kong government and the Chinese communist regime.

The U.S. bill, introduced in June, proposes making Hong Kong’s special trading status contingent on the issuance of an annual certification of Hong Kong’s autonomy by the U.S. secretary of state.

Ng said protesters will continue fighting for all their demands to be met. “Universal suffrage, one man one vote is an ultimate trust, a mutual ultimate trust between the government and the people,” he said. “The government believes we will use our best judgment to her future, and we decide that our self-elected officials will act as our basic interests. Totalitarian states do not share this type of trust between the government and the people.” Currently, the city’s leader is voted in by an electoral committee comprising of pro-Beijing elites. Five years ago, Beijing formally announced that it would rule out universal suffrage in Hong Kong, a former British colony that was returned to China in 1997.

Ng said that by not bowing down to the Hong Kong government and the Chinese communist regime, Hongkongers are showing the basic virtues of bravery, democracy, and human rights.

“Please support us,” said Ng. “Because we are the frontline of the battle between the free world and the evil world.”

Police attacked citizens in the Prince Edward metro station on August 31 using batons and pepper spray. In footage captured by local media, officers were seen beating suspected protesters, leaving several bloodied. Citizens suspect that some of the victims of the attack could be dead, as police later rushed out media and first-aiders, leaving no third-party witnesses.

“I do suspect somebody died here,” said Mikey, a protester who wished to stay anonymous. “But I hope not.”

Citizens gathered at the train station on Friday to demand surveillance camera footage before they are erased, which is usually done after seven days.

A citizen giving only her first name Sonya said the incident feels like a terrorist attack by the police and she thinks they want to cover up the reality.

“We have 10 people injured, serious injuries, but we only have seven people sent to the hospital,” said Sonya. “So we want to know where are the three people.” Sonya was referring to the fire department’s change in reporting the number of injured persons. The department said in a statement issued early Saturday morning that the discrepancy was due to an initial error in counting.

Outside the train station, crowds left flowers, burned incense and candles, and left offerings for the victims.

They don’t want to disclose the footage of the CCTV to the public,” said Chang. “But today we are fighting for the truth.”

Blood, sweat, and teargas are starting to define the protests in Hong Kong. As clashes between police and protesters have escalated over the past few weeks, protesters are adamant about the need for an independent inquiry into the police force’s actions.