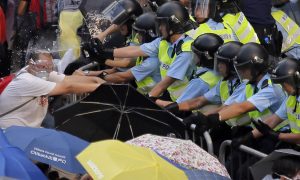 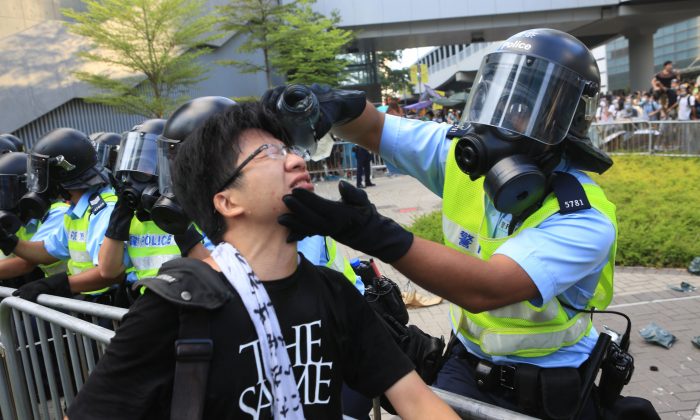 On Sept. 29, a policeman in front of government headquarters took out his own water bottle and washed the eyes of the protester who he had just hit with pepper spray. (Yu Gang/Epoch Times)
Asia & Pacific

The police officers that have been called upon to be Hong Kong’s shock troops—firing and tossing tear gas canisters into crowds of protesting students, and soaking them with pepper spray—have come forward recently to express their frustration and regret.

Tens of thousands of students continue to ambulate through Hong Kong’s central business district each night, as police attempt to contain and repel them. The students are protesting recent moves by Beijing to limit Hong Kong’s ability to hold independent elections.

“Once, I felt I was the luckiest person in the world, because I could fulfill two of my childhood dreams at the same time,” wrote Arnold Wai, a member of Hong Kong’s auxiliary police force, on Facebook, on the evening of Sept. 28. “Before, I was very proud when I personally brought criminals to justice,” he said.

“However, I just phoned my superior tonight, quitting this job. I don’t want to be a political tool for someone,” he wrote, in a post on Facebook that was widely shared among Hong Kong Internet users.

Volunteer or reserve officers are called upon to assist at times of natural disaster or civil emergencies and support the regular force in crowd management duties, according to the official Hong Kong Police Force website. It is unclear whether Wai himself had been asked to perform those duties.

“People of Hong Kong, please believe in yourselves. The price could be high, but this is Hong Kong—it will succeed,” Wai added.

The remark was shared over 1,000 times on Facebook among friends and acquaintances.

Separately, on Sept. 29, the day after the first large scale use of tear gas canisters and pepper spray on protesters, the Epoch Times received a note from a remorseful police officer, who wanted to apologize to the people of Hong Kong for being a member of the force that is suppressing the peaceful protest.

“I want to tell everyone in Hong Kong, especially those who participated in the protest Central yesterday: I am very sorry! I don’t have the courage to come out in public and give an apology in person, because I am scared. The very first moment I saw the smoke coming from the tear gas, I’ve had deep remorse. I am afraid that what I write will be discovered by someone, and I am afraid that I might lose my job. I have thought about this for a long time, and I couldn’t rest.

“I had long thought that the protestors were troublemakers—simply trying to prove themselves. In the past, I hated people like them. Colleagues were all afraid of facing the protesters because police officers have many rules in dealing with them. And today, when we found out that more force could be used, we were very happy.

Not exactly the best of days for Hong Kong’s police force pic.twitter.com/7wlAkmjir8

“When I saw the reaction of protesters being hit with tear gas, I was stunned. What was I doing? A few young men and women were sitting there quietly, and now they were all in great pain. Tears began flowing down my face. Do not think that every one of us are serial killers—at least I was not prepared for something like this. But I couldn’t been seen by other police officers—I just pretended everything was alright and continued to clear out people.

“People of Hong Kong, I sincerely apologize to all of you. Please forgive a coward like me.”

The note was signed “a Hong Kong police officer (not a public security agent).”

“Public security agent” refers to the police in mainland China.

Some of the protesters have been moved by the spirit of this letter, with Agnes Chan and Yanice Wong, two young demonstrators, creating a Facebook page that calls on Hong Kongers to “befriend” policemen they know. But, they warn the police, “a sudden impulse could mean the end to many beautiful friendships.”

And on Sept. 29, in front of Hong Kong government headquarters, a remarkable scene took place. A young protester standing near a riot policeman was attacked, apparently unprovoked, with a bolt of pepper spray across the face and in the eyes. He screamed out “We are unarmed, how can you attack us like that?”

Behind the helmet and face mask, the policeman’s expression could not be seen, but he seemed moved and said “I know, I know.” He beckoned the man over, turned around and retrieved his own water bottle, and proceeded to wash out the man’s stinging eyes.

With reporting by Yu Gang.