Hong Kong Police Officer Becomes One of the Protesters 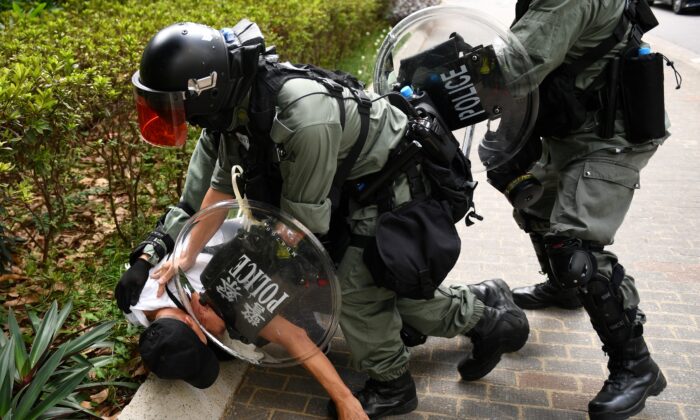 Hong Kong police detain a man for an unknown reason outside a shopping center in the Tai Koo area of Hong Kong, China on Oct. 13, 2019. (Mohd Rasfan/AFP via Getty Images)
By Olivia Li

Months ago, a young Hong Kong police officer decided to quit the force and join the pro-democracy protests.

Canaan Wong, 29, joined the police force in 2015. He told Hong Kong-based Stand News that he didn’t hesitate to make the transition although he was well aware that the friends he made at work might not understand his decision, and some may even sever their relationship with him.

“I did feel sad that I had to make a choice between friendship and justice. I value this group of friends, but it is my sincere hope that I chose to side with justice,” he said.

According to Wong, the majority of police officers believe it is normal to subdue citizens who openly raise demands to the authorities. In addition, the Hong Kong government has taken a clear stance to allow Hong Kong’s police force to commit violence and random arrests at will.

In his opinion, some officers don’t know much about current affairs, nor do they care to. They like being policemen because they enjoy using guns and weapons. Such people regard the suppression of protesters as an enjoyable and thrill-filled game.

At the same time, as the police encounter friends and relatives holding opposite views and are routinely confronted by Hong Kong citizens, they feel isolated and tremendous pressure develops. It is quite possible that the pressure turns into hatred and the police then vent their discontent on protesters, Wong said.

Now working as a teacher’s aide, Wong often finds himself in a face-off with former colleagues during weekend protests.

He decided to stand in front of a media camera and tell his police friends, “Actually you have a choice.”

He also criticized the police for their brutality and unprofessionalism. As a protester, he has witnessed police beating protesters with batons, which deeply worries him.

Wong said that police training taught him to use the lowest level of force possible and only when necessary. Only when encountering “active assault” can the use of the baton be justified. However, videos repeatedly show that the Hong Kong police don’t seem to be following these guidelines at all.

Wong has attempted to persuade some of his former police officers to quit the force, but without success so far. A friend told Wong bluntly that the generous overtime allowance he is paid is what keeps him on the police force.

According to government figures released on Dec. 27 of last year, Hong Kong police earned a total of HK$950 million (US$122,305,261.00) in overtime pay during the six months of pro-democracy protests.