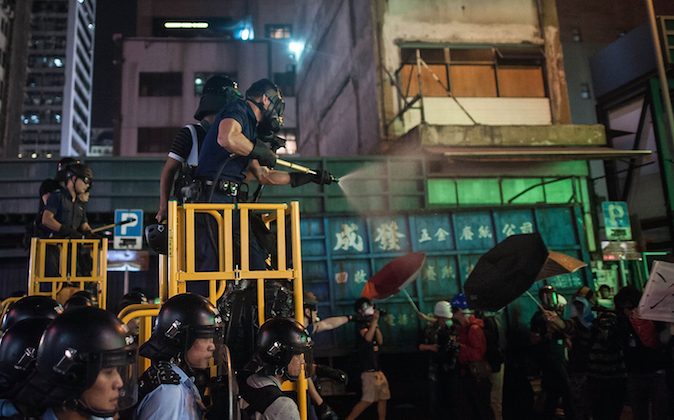 Riot police use tear spray during clash with protesters at Mongkok district on November 25, 2014 in Hong Kong. The Mongkok protest site is scheduled for clearance by baliffs this week after Hong Kong's high court authorized police to arrest protesters who obstruct bailiffs on the three interim restraining orders. (Anthony Kwan/Getty Images)
China

After a tense standoff at the clearing of Argyle Street, the action shifted to the nearby Shanghai, Shan Tung, Portland, Soy, and Dundas streets.

In the evening, police reportedly used batons, riot gear, and tear sprays on protesters and journalist.

Earlier, police said that a total of 32 people were arrested.

Twenty-three were detained for contempt of court after police warned them not to interfere with workers and bailiffs enforcing a court order to remove obstructions from part of the protest area, one of three sites in the city occupied by activists.

Authorities will enforce on Wednesday a second restraining order covering the rest of the Mong Kok site granted to taxi drivers.

Hong Kong news station RTHK reports that an additional 1,000 police have been added to the 3,000-strong force currently in Mong Kok.

For most of Tuesday, workers in hard hats and gloves backed by bailiffs and police cleared the 50-meter (160-foot) stretch of Argyle Street covered by the court order, which was granted to a minibus company complaining that its business was hurt.

Pro-democracy lawmaker Leung Kwok-hung was among those taken to waiting police vans. By evening, traffic was flowing again on the street for the first time in two months but tensions rose as protesters scuffled on a side street with police trying to force them away from the area. Nine more people were arrested for assaulting officers, a police spokeswoman said.

The chaotic scenes underscored the challenge Hong Kong authorities face in trying to shut down the protest site in gritty, working-class Mong Kok. It’s home to a more unruly and aggressive crowd compared with the main protest site next to government headquarters, where protesters last week put up little resistance to a separate court order to remove a handful of barricades.

Protesters initially put up no resistance as workers started tearing down barricades, moving wooden pallets and other junk into the middle of an intersection to be taken away.

But as the authorities pushed down Argyle Street to remove tents and other debris, they faced defiance from protesters, who used delaying tactics such as asking for more time to pack up their belongings.

Protesters have been camped out on major thoroughfares since Sept. 28 demanding greater democracy in the semiautonomous city. The standoff has continued with no end in sight as neither the government nor the student-led protesters have shown any willingness to compromise.

“I’ll continue to fight for true democracy,” said housewife Candy Chan, 50, a frequent Mong Kok visitor. “We’re fighting because we want the government to come out and respond to our demands.”

The barricade clearances come at a critical phase for the protest movement, with student leaders running out of options, and public support and the number of demonstrators dwindling.

More than 80 percent of 513 people surveyed last week by Hong Kong University researchers said the protesters should go home. The poll had a margin of error of 4.4 percentage points. A separate survey by the Chinese University of Hong Kong released days earlier found about two-thirds of 1,030 respondents felt the same way.

However, depending on the situation in Mong Kok tonight, things could change drastically on Wednesday.

“Tomorrow will be the main event,” said lawmaker Albert Chan of the radical pro-democracy People Power party. “There will be more people joining the resistance. Maybe there will be more arrests tomorrow.”

With additional reporting from Larry Ong