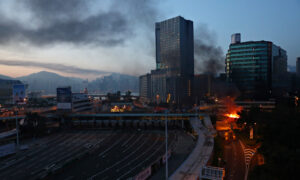 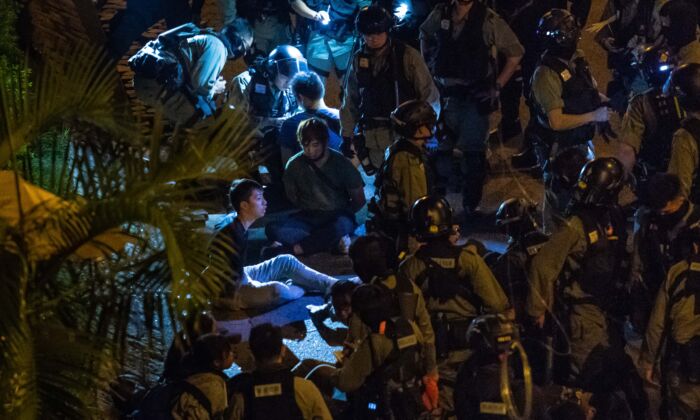 Shortly after police arrested more than 1,000 protesters at Hong Kong Polytechnic University (PolyU) and the nearby area, netizens posted videos and photos online, showing that police abused protesters inhumanely as if they were “war criminals.”

Many local residents were among the arrested for trying to rescue the students trapped in the university campus.

The detained protesters also suffered inhumane humiliation, such as being forced to strip naked in front of others, as revealed in a court trial.

Physical Abuses and Intimidation During Detention

In one of the videos released by police to tout their victory, a group of protesters had their arms tied back and were ordered to lie down on their stomachs, with their faces touching the ground. A netizen explained that the location was on top of a flat roof of a big building at Tsim Sha Tsui.

Another photo taken at Yau Ma Tei showed that the police ordered the detained protesters to kneel down facing a wall, each one had their hands tied behind their backs. According to various reports by local media, police arrested nearly 70 people in Yau Ma Tei. They were forced to remain kneeling on the ground for about an hour. Moreover, medical staff of the Polytechnic University who worked as first-aid volunteers were also taken away by the police, and were mistreated in the same manner as the protesters.

Many netizens posted comments to express their anger at the police, saying these pictures and videos look like “wartime scenes” and protesters were treated as “war criminals.”

Some medical volunteers were forced to leave PolyU. One female volunteer described the situation to the media.

She said that during the chaos on campus, a student protester broke his wrist after someone stomped on it. Medical staff on the site immediately tried to provide treatment for him, but riot police chased them away by pepper spray.

She felt very bad for the injured people, and tears kept rolling down her face as she spoke.

A Hong Kong resident with a Canadian citizenship shared his experience on Twitter about being detained, saying that an undercover police arrested him and took him to Yau Tsim Mong Police Station.

“The police beat me, and then forced me to sit on a chair. They pointed a very bright flashlight at my eyes as a means of torture,” he wrote.

During the detention, he was given a sandwich filled with spicy mustard or a rice ball covered with dust at meal time. The police forced him to swallow the food and would not allow him to drink water.

“We were detained in a basement. We were blindfolded, with our hands tied behind our backs. Police fired unloaded guns as if they were simulating executions. Inside the interrogation room, we saw body bags that police placed there to threaten us. That is the behavior of Hong Kong police under the communist rule,” he wrote, adding that because he has a British National Overseas passport and Canadian citizenship, the torture he suffered was much less severe compared to the other protesters.

On Nov. 18, the second day of Polytechnic University under siege, police arrested 60 people on the charge of “rioting.” Eight of them, aged from 19 to 25, were seriously injured during the detention and were later sent to hospitals. They were prosecuted at Kowloon City court on Nov. 21, but their attorney took the opportunity to expose how they were tortured and humiliated during the court hearing, according to Hong Kong-based Stand News.

According to the attorney, one of the eight protesters sustained injuries on his left shoulder when a policeman hit him twice with a baton. The injured protester requested the police to send him to a hospital multiple times, but police delayed his treatment until 18 hours later. At the hospital, he was found to have fractured bones on his left shoulder. The attorney also revealed that police verbally abused the protester at the police department, calling him “roach” and saying, “Trash of the new era, you must plead guilty.” Furthermore, the police forced him to take off all his clothes, including his underwear, in front of an air-conditioner vent, and ordered him to perform embarrassing movements which made him feel uncomfortable.

Another defendant’s face got injured on the right side and was covered with gauze. His eyes were red and seriously swollen. He said police slammed his head harshly even though he made no attempt to resist the beatings and blows.

The third defendant said police struck his head from the back and also hit his thighs with strong force. When he was sent to the hospital, he had to get his head stitched up.

The fourth defendant sustained injuries on his left eye as a result of police deliberately punching his eye.

The attorney also pointed out that one of accusations against the eight protesters was “possessing dangerous items,” but none of them were found to carry any of these items. “I suspected that it was a groundless charge,” he said.