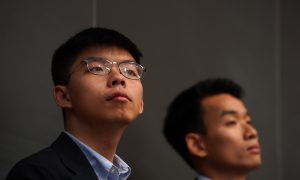 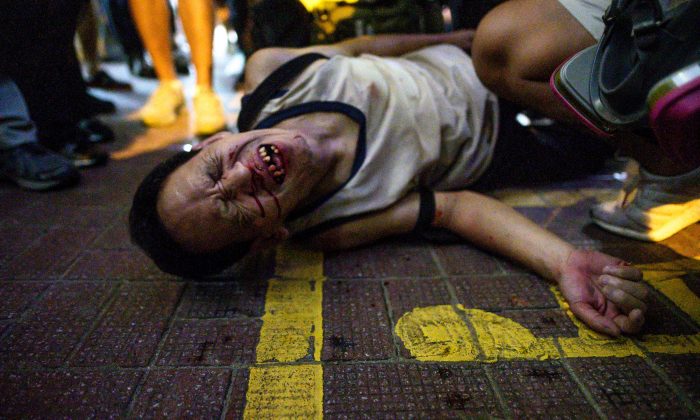 An unidentified man reacts after being beaten by a group of people after a protest in Causeway Bay district in Hong Kong on Sept. 15, 2019. (Philip Fong/AFP/Getty Images)
HK Current Affairs

Clashes between men wearing white shirts and pro-democracy protesters broke out at several Hong Kong metro stations on the night of Sept. 15, capping off the city’s 15th consecutive weekend of unrest that saw police fire tear gas and water cannons at the demonstrators.

Earlier in the day, thousands turned up on the streets to march through the central business districts of Causeway Bay and Central, despite the event being canceled after police rejected the application.

Protests, initially over a controversial extradition bill that would allow the Chinese regime to transfer individuals for trial in mainland China, has since expanded to include calls for open, free elections and an independent inquiry into police use of force. Demonstrators believe the since-withdrawn bill is the latest evidence of Beijing’s encroaching influence in the city’s affairs. The territory was granted a high level of autonomy when it reverted from British to Chinese rule in 1997.

The brawl lasted for several minutes before riot police rushed in and separated the two groups, but fist-fights continued outside on the street. Police closed in again and arrested three people, including one person dressed in black, Hong Kong public broadcaster RTHK reported.

Footage also shows the white-shirted men pushing members of the press on the street. One journalist told the Hong Kong edition of The Epoch Times that he was kicked in the thigh by one of the men, who demanded that he stop filming the incident.

A journalist from local tabloid Apple Daily said she suffered a minor hand injury after a man struck her hand while trying to snatch her phone away from her, RTHK reported.

According to the Hong Kong edition of The Epoch Times, the men were overheard speaking Cantonese with a Fukienese accent, prompting many protesters to suspect that they have links with local pro-Beijing Fukienese community organizations. Police arrested a young protester in black, but let go of a white-shirted man who was in a fight with him after taking down the latter’s ID information.

Throughout the night, similar incidents of police showing leniency to white-shirt attackers caused local officials to voice concerns of discriminatory treatment between pro-democracy protesters and those supporting Beijing.

Lo Kin-hei, vice-chairman of the Democratic Party, posted a video from an incident outside Fortress Hill station on Twitter on Sept. 15 and wrote: “Pro-Beijing thugs beat up people and police talk to them nicely, not knocking them down on the floor and kneel on their throats or necks [as when arresting pro-democracy protesters].”

Wu Chi-wai, Democratic Party chairman and a member of the city’s unicameral legislature, said the pro-Beijing crowds were a show of communist agents’ scare tactics to suppress dissidents.

“It is a common scheme of the Chinese Communist Party,” Wu told The Epoch Times Hong Kong edition. “They say they want to put a stop to violence and chaos … but we now see that what Hong Kong needs is to curb police violence and the gangsters’ chaos.”

On Saturday, at least 20 people suffered from injuries during clashes between protesters and government supporters at various shopping malls, according to RTHK. The Hospital Authority said that 18 people were hospitalized by Sunday midnight.

Amnesty International and the United Nations Commission on Human Rights have urged Hong Kong police to act with restraint, noting that they had defied international norms in some of their use of force.

Earlier in the afternoon, thousands of protesters, many clad in black masks, caps, and shades to obscure their identity, raced through the streets in cat-and-mouse chases with the police, setting street fires and blocking roads in the heart of the city. They also carried banners emblazoned with popular slogans such as “Reclaim Hong Kong, Revolution of Our Times,” as well as the national flags of the United States, the U.K., Taiwan, Australia, and Japan, expressing appreciation for citizens and government officials who have voiced support for the movement.

“There could be a heavy price as [we] fight for freedom, so holding various countries’ flags also shows our resolution for democracy,” a protester told the Hong Kong edition of The Epoch Times.

Police, meanwhile, said they had to use force because protesters hurled petrol bombs at government buildings. Protesters also took down and set on fire a large red banner commemorating the upcoming 70th anniversary of the Chinese regime’s founding.

Police made scores of arrests on Sunday evening. Democratic Party lawmaker Ted Hui was also arrested on charges of obstructing police when he appealed to officers to release a couple donning black. The couple had claimed to be onlookers and not protesters.

Since June, around 1,200 people have been arrested due to protests.

As in previous protests, the Hong Kong government issued harsh criticisms toward protesters for participating in an unlawful assembly and noted that some protesters had burnt a Chinese national flag in the district of Wanchai, an act that it said “challenge[d] national authority.”

The MTR Corporation, the city’s metro operator, also expressed regret over what it called “malicious vandalism” in multiple subway stations and warned of legal consequences for such acts.

The MTR has become a primary target for vandalism lately; the operator has suspended train services prior to major protests, making it difficult for people to attend. Many are also outraged at the riot police storming the Prince Edward station on Aug. 31, when many passengers were injured.