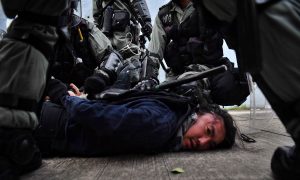 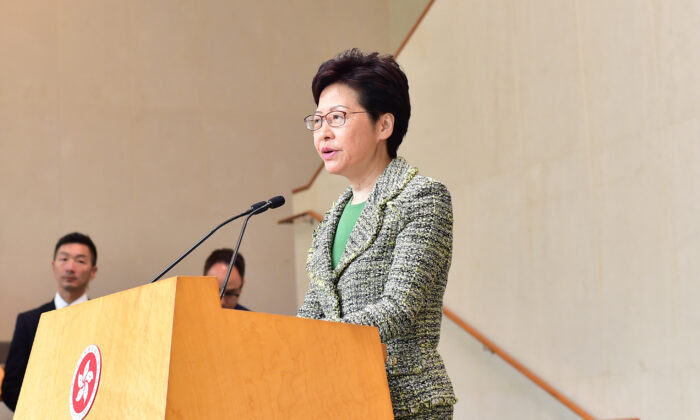 Hong Kong leader Carrie Lam is touting strong public interest in her first community dialogue to be held this week, amid signs that the talks aren’t being well-received by skeptical residents.

In a press conference on Sept. 24, Lam spoke of how over 20,000 people had signed up online for the dialogue to be held this coming Thursday evening. The dialogue is going to be held at the Queen Elizabeth Stadium in Wan Chai. Lam and other officials will attend, along with 150 members of the public to be randomly selected by computer draw.

Lam first proposed her platform of dialogue on Aug. 20 as a way to reach out to the public and quell the dissatisfaction fueling the ongoing protests, now in their 16th week.

However, Lam said that the first dialogue would only be a “one step forward” on what is to be a “long journey to achieve reconciliation in society.”

She said she would regard the dialogue on Thursday a success if talks were carried out in a “frank and candid manner.”

When asked by a reporter about the many restrictions announced for those taking part in the dialogue, Lam said that the rules were needed to foster a calm atmosphere that would promote discussion.

The Hong Kong government has issued a “venue charter,” setting more than 10 requirements for those who wish to take in the dialogue. One of them is that participants cannot bring items such as banners, masks, helmets, and umbrellas.

Hongkongers are known to carry these four items when taking part in protests, with umbrellas having become symbolic of the city’s struggle for greater democracy dating back to the 2014 Umbrella Movement.

Signs of opposition to Lam’s dialogue platform were evident from the responses she received on Facebook after she officially launched her platform on Sept. 23. Her post was flooded with the response “Five Demands, Not One Less.”

Civic Party lawmaker Tanya Chan also commented on Sept. 19 that a stadium venue with a capacity for 3,500 was only being used to accommodate 150 participants, adding that the two-hour session left only an average of 48 seconds for each participant to speak. Her criticisms were shared by pro-democracy member Claudia Mo.

No helmets, no umbrellas, no gas masks, no metal/glass/plastic containers … allowed
at CarrieLam’s “community dialogue” session to be held nx Thursday at a 3,500-seat sports stadium – – but only #150 participants allowed#TooScared#LittleTinpotDictator#HongKongProtests pic.twitter.com/xZzScLyast

In early September, Lam yielded to one of the protesters’ demands when she announced the withdrawal of the controversial extradition bill that sparked the mass protests.

The bill had led many Hongkongers to fear the proposed legislation would erode the city’s autonomy. If passed, Hong Kong residents and international travelers would have faced risk of extradition to China upon request by the ruling Chinese Communist Party, where they could be put on trial in the party-controlled courts.

Now, protesters have continued to stage protests as they demand greater democracy, as well as the establishment of an independent commission to investigate allegations of excessive police violence against protesters.

Police announced that they had arrested a total of 1,556 people—aged between 12 to 82—since June in a daily briefing on Sept. 23. Among these arrests were 82 individuals taken in over the weekend for charges such as illegal assembly, possession of weapons, and desecration of the national flag.

During the press conference, Lam voiced her support for the Hong Kong Police but added that “it doesn’t mean I would condone the police’s violation or wrongful acts.”

Lam added that it was “quite remarkable” that Hong Kong had “not seen the major fatalities” over the last three months. Her remark of zero death has since been criticized on social media for being insensitive.

She responded to one reporter that her government has not enacted the Emergency Regulations Ordinance because it would damage the city’s international status.

There has been speculation since the end of August that Lam would enact the ordinance, which grants the chief executive broad powers to make arrests, stop communications, and issue punishment during “occasions of emergency or public danger.”

When asked about the city’s plans to celebrate the upcoming People’s Republic of China National Day on Oct. 1, Lam said the celebration must be “solemn and respectful” in a “safe environment.”

Violence in Hong Kong has continued after Democratic Party lawmaker Roy Kwong was sent to the hospital in the morning on Sept. 24. He was punched and kicked by three attackers in Tin Shui Wai. According to Hong Kong media, one of the assailants held a camera to record the attack.

“I do think that it is a planned attack, trying to send a message to threaten all the legislative councillors of the democratic camp and the other organizers and participants of the anti-evil law movement,” fellow Democracy Party lawmaker Lam Cheuk-ting told local media RTHK.

Democrat lawmaker #RoyKwong beaten up today, with one #assailant accomplice #filming how they did it. And around same time #CarrieLam was saying ‘remarkable’ that nobody #dead yet in the ongoing #HongkongProtests pic.twitter.com/xqLc3Vkzxy

Civil Human Rights Front (CHRF), the main organizer behind the city’s biggest protests since June, has called for two different protests in the coming days.

It called for a rally at Tamar Park in Admiralty in the evening of Sept. 28 to mark the five-year anniversary of when the police first fired tear gas against protesters during the Umbrella Movement.

CHRF also called for a march from Victoria Park to Charter Road in the afternoon of Oct. 1 to call on the city government to fulfill the rest of the protesters’ five demands.

The Student Union of the University of Hong Kong (HKU) has called for a gathering they’ve called “Unity for Democracy—Align With The World” inside the school campus on the evening of Sept. 25.

“The rationale of the assembly is to connect international students in HKU by explaining and exchanging views regarding the pro-democracy movement, hoping to gain more attention from the world,” the student union said in a statement on Facebook.