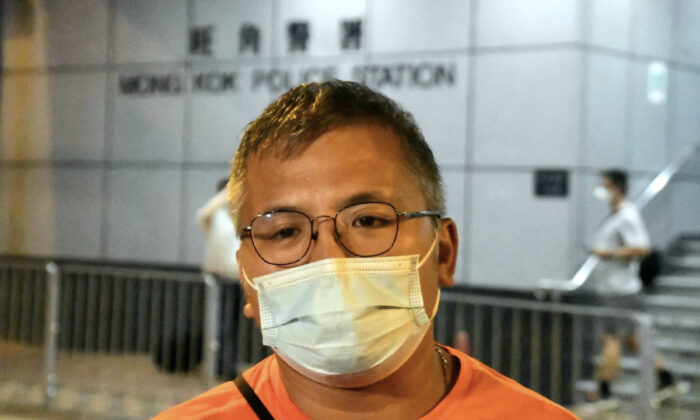 Ronson Chan speaks to the media after he was released on bail in Hong Kong, on Sept. 7, 2022. (Big Mack/The Epoch Times)
Hong Kong

On Sep 7, Chairperson of Hong Kong Journalist Association, and former Stand News Reporter, Ronson Chan Long-sing was arrested for ‘obstructing police’s work, and misconduct in public places while being on duty.

Chan was released on bail of HKD500 (approximately US$64) later at night but has to report back to the police station on Sep 21.

This is not the first time Ronson Chan was harassed by the Hong Kong Police. While the media were live streaming during the Hong Kong protests, a police officer asked for Chan’s Identity card and showed it on camera to the public without permission.

Stand News was often a target of the authorities during the anti-extradition movement. After Stand News was shut down by the Security Bureau for ‘violating’ the National Security Law, Chan became a reporter at Channel C, an online media company as a vice-reporting director.

On Dec. 29, 2021, at dawn, the National Security Bureau entered Chan’s residence and searched his apartment on suspicion of ‘conspiracy to publish inciting materials’ under the national security law. Chan was taken to the police station for an investigation. Multiple executives of Stand News were also arrested on the same day.

According to Channel C, Chan together with a photographer went to an owners’ meeting of Long Ping Estate, Yuen Long, held at the McPherson Stadium in Mongkok on Sep 7. Police officers stopped both of them at the venue entrance. The police demanded to see their identity cards. While the photographer was let go after being checked and questioned, Chan was arrested.

Multiple pro-government news outlets reported that Chan was acting ‘hysterically’ during the stop and search. They also claimed that Chan refused to show his identity card.

According to the police statement, at about 11 a.m., on-duty police stopped two ‘suspicious looking’ men at the junction of Yim Po Fong street and Nelson Street in Mongkok.

They stopped the two men for identity verification. One of the two males refused to cooperate with the police when asked to show his identity card. The police claimed that after several warnings, the 41-year-old male named Chan was arrested for obstructing police work while on duty and misconduct in public places.

The case is now being followed by the Mongkok District Criminal Investigation Unit.

Lin pointed out that while police have to maintain order at the scene, they should cooperate with reporters. He suspected that the police intended to cause Chan trouble. Lin thought it was the police’s way of threatening reporters to obey.

Chan had been targeted and treated violently by the HKPF on multiple occasions while performing his duty as a journalist since 2019 during the anti-extradition protests. On Dec. 26, 2019, during a live broadcast for the now-dissolved Stand News, a police officer displayed Chan’s identity card to the camera to thousands of viewers for about a minute. Although Chan reminded the police officer that he was breaching the Personal Data (Privacy) Ordinance, the police officer continued.

Chan later filed a complaint to the Office of the Privacy Commissioner for Personal Data of Hong Kong (PCPD). The PCPD published an investigation report the following year. It was adjudicated that the involved police officer had violated the Ordinance. In the report, PCPD also stated that the policeman’s behaviors contradicted his search duties and were against the principle of protecting personal information.

HKJA at the time demanded the police formally apologize to the affected journalist. HKJA also stated that the police have been obstructing journalism, and violating the law and regulations since the 2019 Hong Kong Protests.

When the HKJA chairman left Mongkok Police Station on bail last night, he explained to the waiting press, “I was, as usual, trying to obtain information from the police officer during the stop and search. I was not doing anything dangerous but was treated with exaggeration.”

Upon learning that the casually clothed police officer was a part of PPRB, Police Public Relations Branch, Chan was ready to present his identity card. Then all of a sudden, someone asked him to stand back. Chan thought it was a random middle-aged male civilian asking for his ID card. So Chan demanded to see his warrant card to prove he was an officer. As soon as the police officer confirmed his unit, a police chief handcuffed Chan.

Chan stated, “When I arrived at the police station, I was asked by the very same police chief when I am going to die. He also said the HKJA is a piece of trash.”

Because of his previous experience, Chan is very nervous about his ID, “I did not think it was unreasonable to ask the police to identify themselves.”

The General Police Regulations also stipulate that any police officer should indicate their identity and work unit when the situation permits. Chan believed that he was only fulfilling his civil rights.

Hong Kong Journalists and Freedom of the Press

Police regularly clashed with journalists during the protests. Riot police shot Ronson Chan on the foot with a pepper spray bullet during the sieges at Polytechnic University in 2019.

At a 7.21 commemoration event, police pepper sprayed Chan in the eyes without prior warning.

In 2021, Chan was appointed as the president of HKJA as the authorities and regime tightened their grip on journalism. As a result of police action and political pressure, several media companies have ceased operating in the last two years.

Chan is set to head to Oxford University in the UK this fall for a Reuters research fellowship for six months.

Chan expressed that he is not too concerned about whether his plan will be affected, and emphasized, “Come what may.”

Nie Law and Ying Cheung contributed to this article.