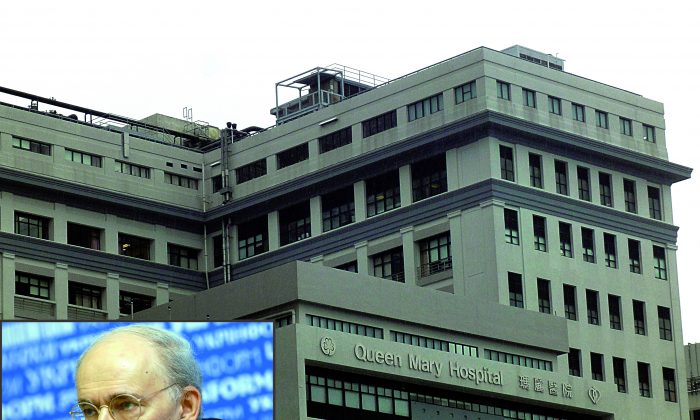 This composite image shows human rights lawyer David Matas in the bottom lef-hand corner and Hong Kong's Queen Mary Hospital in the background. The hospital holds a liver transplant registry, which, if opened to the public, could provide important information about forced organ harvesting in China. (Poon Chai-Shu/Epoch Times)
China

HONG KONG—Queen Mary Hospital is home to a database of China’s liver transplants that holds evidence that can be used to help expose the practice of forced, live organ harvesting in China.

The database is closed to the public, but it wasn’t always that way, according to Matas who has spent years investigating the Chinese Communist Party’s (CCP) organ harvesting from Falun Gong practitioners and other prisoners of conscience.

“Every hospital in China has to report cases of liver transplants to Queen Mary Hospital. These data were open to the public in the past, but when other researchers and I started quoting references from them, they closed it down,” Matas explained at the Nov. 28 forum.

With its world-class surgery unit, Queen Mary Hospital is responsible for managing the database of the China Liver Transplant Registry (CLTR), which was established in February 2005 to keep records of all liver transplant surgeries in China. The database’s purpose is to assist with scientific analysis and assessment and to establish a scientific exchange platform among liver transplant centers in China and around the world.

“It is extremely helpful and important to get this data,” said DAFOH spokesman Damon Noto.

“It will help us track how many livers are transplanted, and in what hospitals and with what frequency,” he said. “When China says they are doing less transplantation now, we can’t confirm that. This registry will allow us to confirm how many hospitals are doing what.”

“It would be nice if we had the kidney registry, the cornea registry, and so on. It could act as a sample, letting us know how many organs are being transplanted in China and where,” Noto added.

The CLTR also annually ranks the quality and validity of the data supplied by each liver transplant center, including the quantity of livers transplanted and whether the organs are complete or partial. The data from Oriental Organ Transplant Center of Tianjin First Center Hospital was ranked No. 1 in 2010 and 2011.

According to World Organization to Investigate the Persecution of Falun Gong, Tianjin First Center Hospital is one of the hospitals suspected of using live organs from Falun Gong practitioners. The hospital completed a record-breaking 44 liver transplants in a single week in December 2004, according to South Korean newspaper The Chosun Ilbo.

“It was very concerning that this one hospital was able to do so many,” Noto said. “Why do they have such a supply of organs? Is there a prison or labor camp right next to the hospital? This would give us clues as to where the organs are coming from.”

“Another thing is, we don’t know how much we can trust the data. Previously, David Matas was pretty confident this was accurate. But now that we say it is key, they may fudge the data,” he said.

“In order to know a transplant system is ethical it needs to be transparent,” Noto added. “In other countries one can see their registries. Not only should China open their registries now, they should open their previous registries. We should have access to the history of what they have done.”