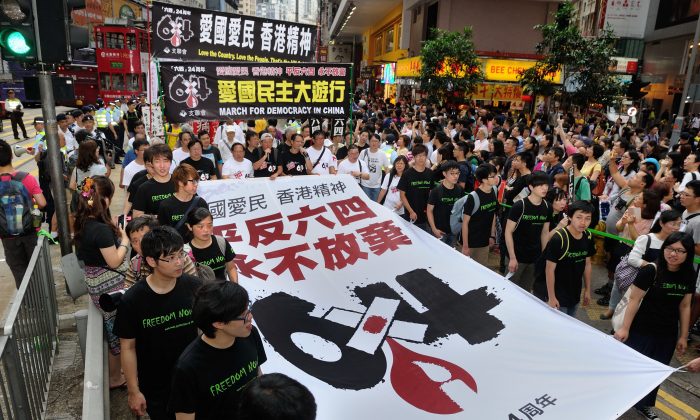 Around 1,600 people gathered in Hong Kong on Sunday for the annual Patriotic Democracy Parade to commemorate the 1989 Tiananmen Square Massacre.

The event is organized each year by student-activist group Scholarism, and the Hong Kong Alliance in Support of Patriotic Democratic Movements in China.

Participants gathered at Victoria Park, and marched for about two hours. Scholarism members walked towards the Liaison Office of the Central People’s Government, while the other group made its way towards Central Government Office.

Many mainland tourists took photos during the parade. One man, who was part of the student movement before the brutal crackdown on June 4, 1989, expressed his gratitude: “Thank you to everyone in Hong Kong. The people here have always commemorated this incident. I hope vindication [for the victims] will happen eventually.”

Mr. Yang, a mainlander, arrived early for the event. He told The Epoch Times that he was “very moved” by the gathering. “I wish more mainland Chinese would come here, not necessarily to participate, but to at least gain some understanding about it,” he said. “This could be a building block for a future democratic China.

“In China now, all the youngsters are eagerly seeking wealth, dining, and entertainment. They lack morality and ideals, and they don’t have any goals to pursue,” he said. “I hope this event really inspires them to give up their hedonistic lifestyles and do something for the future of China.”

Numerous pan-democrats took part in the march. Cai Shufang, who was a reporter at Tiananmen Square when the military opened fire on the students, encouraged people to stand up against the communist regime. “I deplore how people like us are all slowly and systematically silenced and murdered, until finally there is no one left,” he said. “So for our future and for the next generation, we must all come out and each carry a candle.”

Alan Leong, leader of the Civic Party, said that Chinese values will continue to be undermined until the massacre victims are exonerated. “The murdering of students was turned into something legitimate. What’s wicked and wrong has been whitewashed as righteous and correct. This has impacted all of China.”