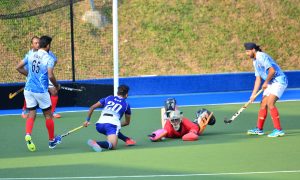 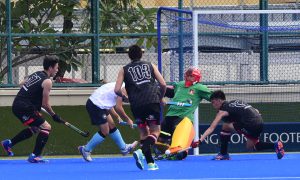 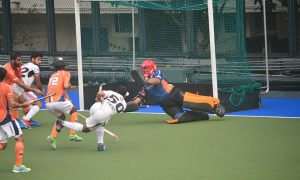 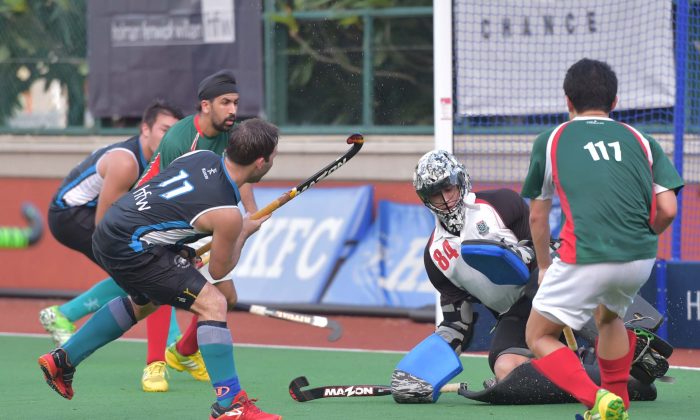 HKFC_A (blue) on the attack in their 12-0 win against KCC-A in the opening game of the Hong Kong Hockey Association, 2016 Premier Division campaign on Sunday Sept 11, 2016 to take them to top of the table. (Bill Cox/Epoch Times)
HK Hockey

Hong Kong Hockey Association Premier Division 2016 is now under way, the first matches were played on Sunday Sept 11 with 2 matches at Hong Kong Football Club (HKFC) and 2 at King’s Park.  The game between Khalsa-A and Pak-A has been further delayed until Oct 9

In the later match HKFC-A took on KCC-A. HKFC-A have also made changes during the summer months, Ishtiaq Ahmed and Arif Ali have both moved over from Khalsa-A to HKFC-A and scored 2 goals and 3 goals respectively in this match. HKFC_A won the match 12-0 taking 6 goals in each half. KCC with a somewhat changed team performed quite well for the first match, but relied heavily on the defensive skills and ball distribution of Ahmed Ewis, playing as backstop.

At King’s Park Shaheen-A had a close match with HKCC-A but came away 2-1 winners, while in the later game, Valley-A lost 1-9 to SSSC-A.

The results remap the table last year showing strength in HKFC-A, SSSC-A and KNS-A with Shaheen also on 3 points after the first match.