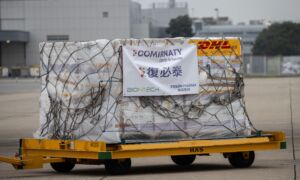 Hong Kong – The Epoch Times in Hong Kong published a “Notice to Inform Hong Kong Residents” on Wednesday, May 11th, stating that the Hong Kong Epoch Times may be unable to continue publishing if it can’t find a printing company willing to accept its business, and their belief that printers are reluctant to work with them because of pressure from the Chinese Communist Party (CCP) in Mainland China. The issue has gained support from the residents of Hong Kong and the international media.

Zhu Tongbin, Editor-in-Chief of Hong Kong Epoch Times , said it looks like they will have to find a printing company for the second time because of interference from the CCP. But the Hong Kong Epoch Times is not the only victim of the CCP’s dirty tricks. In both Mainland China and elsewhere, the CCP has been consistent in attacking any voices of dissent.

Zhu Tongbin said that The Epoch Times Board of Directors decided to make the public aware of this issue because they wanted to expose the tactics of the CCP, and “the world should not have to tolerate their [CCP] hoodlum behavior”.

The day the “Notice to Inform Hong Kong Residents” was published, many readers called The Epoch Times office to express sympathy for their plight. The Epoch Times staff were very touched by this show of support from the readers. One staff member, Ling, said that many readers had phoned to say how much they enjoyed reading the newspaper and encouraged The Epoch Times to persevere in finding a replacement printer. A reader who once lived in Mainland China told Ling that after leaving China, she was pleasantly surprised when she first read The Epoch Times , and that she now believes that there is finally a newspaper that speaks for the people suffering in China. This reader said that during the many years she lived in Mainland China, she experienced a lot of injustices, but, although angry, she did not dare speak about them publicly. She had actually encountered many of the same situations described in The Epoch Times reports about corruption in China.

One elderly reader was saddened and asked with concern if he would ever read The Epoch Times again. Another reader said that she was Christian, and would pray for The Epoch Times during these difficult times.

The Epoch Times held a press conference on Wednesday. Many foreign as well as some Hong Kong media reported on the event.

Zhu Tongbin stressed that The Epoch Times would continue to publish no matter kind of setbacks it may encounter. She also thanked readers for their loyal support.