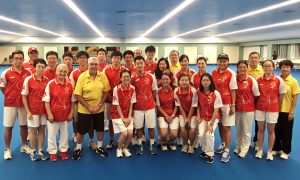 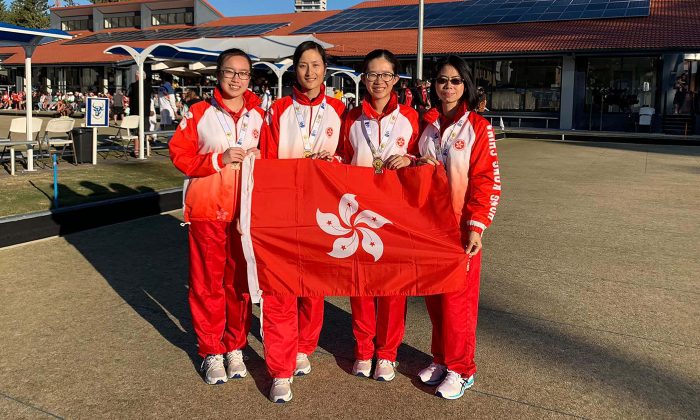 GOLD COAST—Hong Kong maintained its status as one of the stronger bowling nations in the world by winning a bronze medal in the women’s fours at the Asia Pacific Championships.  Hong Kong also won a bronze at the men’s fours in Christchurch, New Zealand in the last competition in 2015.

Held every four years, the 2019 Asia Pacific Championships was staged at Gold Coast in Australia.  A total of 19 bowling nations from Asia and Oceania areas participated in the 11-day event, which is also a qualifying event for the 2020 World Bowls Championships in the same city.

The women’s fours team included skipper Angel So, Cheryl Chan, Gloria Ha and Phyllis Wong.  They started very well in the competition, won all three games against China, Fiji and Thailand in the first day to top the table with nine points.

Skipper So believed that the early arrival helped them to perform, “We came in early to get familiar with the green and it really helped us a lot.  We picked up the green better and the three wins in the first day also boosted our morale. Everyone performed to their good standard and we were full of confidence from the first match onward.”

In the fourth game, they met a strong team from the host nation Australia and were bumbled 21:6.  The team did not lose their faith and defeated Papua New Guinea 15:13 in the second game of the day.  They went on to beat Malaysia to ensure a place in the play-off.

The team played Canada in the play-off and won comfortably at 17:7.

Hong Kong then faced New Zealand in the semi-finals.  The team started well and opened a lead of 2:11 after eight ends.  They lost three shots in the following end but pulled one back in the 10th end.  The Kiwis then changed their tactic to play long and pulled back seven shots in the following five ends to force the game into tie-breaker.

So is happy with the result and believes that the change of tactic from the New Zealand team won them the game, “The team performed quite well from the start.  In the middle of the game our opponents changed the playing distance.  Although we could also manage that distance, their third and skip performed better and their conversion ratio was better than us.  It was such a minor difference that decided the winner.”

The New Zealand team went on the defeat Malaysia in the final.

In the other disciplines, all the other Hong Kong teams finished fourth in the group stage and missed the chance for the play-off.  They included the women’s singles (Helen Cheung), men’s pairs (Tony Cheung and Imen Tang), and men’s triples (Adrian Yau, Lyndon Sham and James Po).

Good news is that all these four disciplines have qualified for the World Championship 2020.

The other four disciplines are now underway and the finals are scheduled for, Friday, June 28.

The Premier League will continue this Saturday, June 29 at 2:30pm at all greens in Hong Kong.