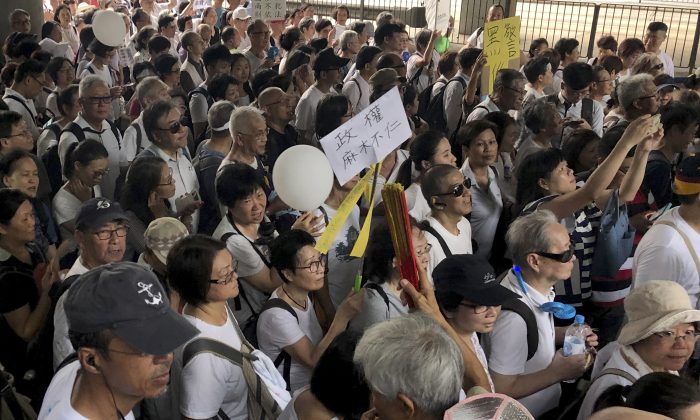 Elderly Hong Kong residents march in Hong Kong on July 17, 2019. Thousands of Hong Kong senior citizens, including a popular actress, marched in a show of support for youths at the forefront of month-long protests against a contentious extradition bill in the semi-autonomous Chinese territory. (Phoebe Lai/AP)
Hong Kong

HONG KONG—Thousands of Hong Kong senior citizens, including a popular actress, marched on July 17 in a show of support for youths at the forefront of monthlong protests against a contentious extradition bill in the semi-autonomous Chinese territory.

The seniors also slammed the police for their handling of a protest on July 14 in Hong Kong’s Sha Tin district. That protest was mostly peaceful but ended in mayhem when violent scuffles in a shopping mall saw dozens injured, including a policeman who had a finger bitten off, and over 40 people detained.

Veteran actress and singer Deanie Ip, who joined Wednesday’s demonstration, said police shouldn’t use heavy-handed tactics against young protesters who “have no guns” and were peacefully expressing their frustrations.

“They are young people and they are doing the right thing. Why are they being mistreated?” she said.

Ip and several others held a banner reading “Support youth to protect Hong Kong” as they marched through a financial district. Wearing white tops and black pants, marchers held placards that read “Never give up” and “Stay together.”

Some elders in wheelchairs also joined the march. Organizers said about 8,000 people participated in the demonstration.

Hong Kong has been jolted for over a month by a series of large-scale and occasional violent protests amid widespread anger over a proposed extradition law that would send suspects to mainland China to face trials. The bill is seen as a threat to Hong Kong’s freedoms that were guaranteed for 50 years when China took back control of the former British colony in 1997.

Even though Hong Kong’s embattled leader, Carrie Lam, suspended the bill and declared the legislation “dead,” her moves failed to placate the protesters, who have demanded her resignation. Tens of thousands have continued to take to the streets, with the protests expanding into a bigger movement against China’s growing intrusion into the territory.

The senior citizens on Wednesday repeated demands for the legislation to be formally withdrawn, for the release of dozens of people detained and for an independent inquiry into alleged police brutality against protesters.

More protests have been planned, which could cause further instability in the global financial hub.

Phil Chan, a senior fellow at the Institute for Security and Development Policy in Stockholm, said violent clashes between protesters and police could intensify unless the government starts to engage meaningfully with the people in meeting some of their demands, including the move toward universal suffrage.