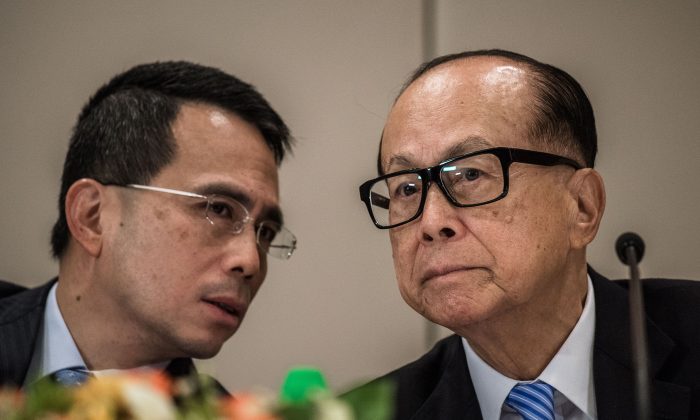 HONG KONG—When you fight for freedom, sacrifices have to be made. Even well-to-do hedge fund managers like Edward Chin of 2047 HK Monitor are not exempt.

Since he and other Hong Kong finance figures threw their weight behind the Hong Kong democracy movement in 2014, the cancellation of his regular newspaper column in the Hong Kong Economic Journal was only one indicator that the going would get rougher for him.

But this is not about his personal freedoms. It is about the freedom of Hong Kong and its future as Asia’s foremost financial center.

Read the first part of the interview.

You Describe the CCP as an Evil Empire

Do I think the Chinese Communist Party is an evil empire? Yes, evil in the sense that a lot of them they tried to hide away their wealth. This is in the International Consortium of Investigative Journalists report 2014. As much as $4 trillion in assets from top leaders are hiding in Cayman and British Virgin Island accounts. From paramount leaders such as Deng Xiaoping and Jiang Zemin to Xi Jinping now: Everybody.

On the one hand they say: Love the country, love Hong Kong. But on the other hand these guys at the top, they are getting all the foreign passports and hiding their wealth. They honestly don’t know how long the CCP is going to last. They are not even confident themselves. They are very good at lying.

In Hong Kong, a lot of people believe in the core values of Hong Kong, like press freedom and the rule of law, which we were brought up with from the colonial days. They were never perfect, but at least there is a skeleton of a more democratic framework.

Now Hong Kong is under duress. It seems that even people like Li Ka-shing are sensing they are losing their edge to the new princelings on the mainland.

Late last year the 70 most powerful families of Hong Kong went to Beijing and spoke to Xi Jinping. These are transactions done at the very top—the middle class and the grassroots people become hopeless because there is less upward mobility.

If you talk about the bright student leaders who were involved with the movement: For Joshua Wong, who just turned 18 a few months ago, it would be very difficult to get a job unless he stays in politics, which is a very tough thing.

Can You Name Concrete Interference in Hong Kong Affairs?

Wang Xizhang, who is in charge of finance, made some comments recently. He said: We can handle the problem of corruption ourselves, something like that. It’s basically saying that you don’t need the rule of law and can continue to be corrupt. To handle it internally.

Even with the Umbrella Movement, triad members were brought in.  This is funded by the CCP—I don’t know which part, because they are having a power struggle between Xi Jinping and Jiang Zemin. It is alleged they are funding the triad members to stir things up in Hong Kong. This is what Mao Zedong talks about when he says: If the whole world is in a chaotic situation it’s even better. Because in a chaotic situation you have more opportunities.

It was like that at the Mong Kok Occupy area. There were thugs that were brought in. There were some thugs surrounding the Apple Daily compound, blocking the newspaper’s circulation. It’s an interesting time in media as well.

Your Column Got Axed from The Hong Kong Economic Journal…

They are definitely CCP influenced. They are owned by Richard Li, Li Ka-shing’s younger son. They tried to silence pro-democracy voices in a very obvious way. They did that in September of last year. That was before Occupy.  The only free standing newspaper is Apple Daily. Ming Pao is half and half, because the owner from Malaysia has got some ties with Beijing.

The media has become less free since 1997, and that’s become more obvious in the last two years.

The most important thing is to have fair competition in Hong Kong, and we see that eroding. Moving forward, Hong Kong will be based even more on guanxi, based on relationships and the government and the princelings—and there’s is no check and balance between the two groups; they work with each other.

This always happens. For example, there is a lot of collaboration between the big families who control real estate and the government here. Now the Hong Kong tycoons are losing influence, the newcomers from mainland are coming in.

Any communist country is only concerned about money and power. These dictators don’t give you transparency. Even Putin—we don’t know how much money he has.

Until the paramount leaders in China declare their personal assets, China will not be free.

You Say Your Phone is Being Tapped?

I am with the original Occupy Central group. It’s tough because they tap your phone.

After talking for a while your phone sounds like you’re diving, underwater. Quite a few members’ phones are being tapped.

Sometimes when I talk to other members, they just cut your line. There are close to 500,000 cyber soldiers in China.

For the group 2047 Finance Monitor, we’re more outspoken, people like David Webb, a shareholder activist. We have Ching Cheong, a highly regarded veteran journalist who was jailed in China for over 1,000 days. We are just ordinary people who want to speak the truth.

The CCP is definitely an evil organization. The long term impact on Hong Kong business is bad if you don’t have a real election.

Edward Chin is the founder of “2047 HK Monitor”, a group of finance professionals backing “true democracy” in Hong Kong. Mr. Chin has over 25 years professional experience in hedge funds and securities trading in North America and Asia. He is currently managing a family office based in Hong Kong.